Michigan Governor Gretchen Whitmer is taking legal action to force a shut down of the Enbridge oil pipeline that runs under the Straits of Mackinac that links two of the Great Lakes.

In a release from the governor's office, Whitmer's office said the governor and Department of Natural Resources (DNR) Director Dan Eichinger notified Enbridge that the 1953 easement allowing it to operate dual pipelines in the Straits of Mackinac to transport petroleum and other products is being revoked and terminated.

Gov. Whitmer moves to shut down Enbridge oil pipeline under Straits of Mackinac

Line 5 is the oil pipeline that runs under the Straights of Mackinac. The threat of rupturing beneath the Great Lakes has been on the radar of the Governor and Attorney General Dana Nessel.

According to the governor's office, this notice means Enbridge must stop operating the two pipelines in the Straits by May 2021 after Michigan's energy needs are transitioned.

Michigan Attorney General Dana Nessel filed a lawsuit Friday seeking to stop the flow of oil through Line 5 within 180 days.

The line carries oil and liquids used in propane between Superior, Wisconsin, and Sarnia, Ontario, passing through parts of Michigan's upper and lower peninsulas. A 4-mile-long segment divides into two pipes that cross the straits.

"Enbridge has routinely refused to take action to protect our Great Lakes and the millions of Americans who depend on them for clean drinking water and good jobs. They have repeatedly violated the terms of the 1953 easement by ignoring structural problems that put our Great Lakes and our families at risk,” said Governor Whitmer. “Most importantly, Enbridge has imposed on the people of Michigan an unacceptable risk of a catastrophic oil spill in the Great Lakes that could devastate our economy and way of life. That’s why we’re taking action now, and why I will continue to hold accountable anyone who threatens our Great Lakes and fresh water.” 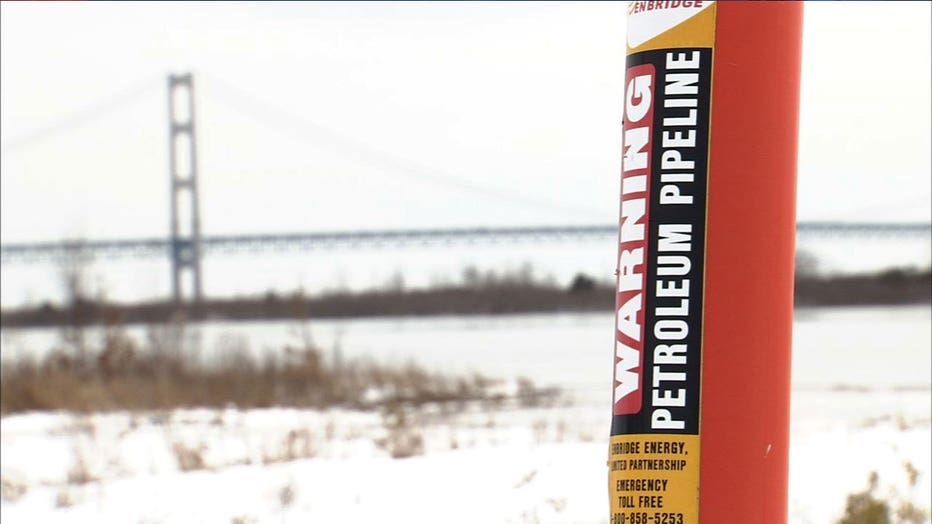 In response to Whitmer's actions, Enbridge says it is "confident that Line 5 continues to operate safely and that there is no credible basis for terminating."

Enbridge said after receiving notice from Whitmer's office and the DNR, it reviewed it with its legal office and called her move a distraction.

“This notice and the report from Michigan Department of Natural Resources are a distraction from the fundamental facts,” said Vern Yu, Executive Vice President and President, Liquids Pipelines. “Line 5 remains safe, as envisioned by the 1953 Easement, and as recently validated by our federal safety regulator. We will continue to focus on the safe operation of the dual Line 5 pipelines at the Straits of Mackinac, ensuring the Great Lakes are protected while also reliably delivering the energy that helps to fuel Michigan’s and the region’s economy."

The state and Enbridge have been at odds for years and, as recently as this summer, were ordered to be shut down after damage was reported to part of the pipeline. Enbridge reported in June that an anchor supporting the underwater section's eastern leg had been bent and scraped, although the pipe itself was unharmed. An investigation concluded that a vessel -- possibly belonging to one of Enbridge's contractors -- might have dragged a mooring cable across the pipes.

The state of Michigan said in July that it wanted Enbridge to promise it would cover the costs of any potential oil spill in the channel but that the company didn't have enough money to fulfill the promise. The company said it would pay for damages if line 5 were to rupture but it was unlikely.

In September, Enbridge said it was resuming operation of the pipeline after a judge ruled it could do so. After the ruling, environmentalists said Whitmer needed to withdraw from the 1953 aggrement.

According to Whitmer's office, the 1953 easement violated the public trust doctrine because it "does not make the necessary public trust findings". The state also says that the state has a duty to protect the Great Lakes and ending the use of the oil pipelines does that.

Additionally, the state says Enbridge has repeatedly violated terms of the deal.

"The easement requires Enbridge to exercise due care in operating the pipelines, and also requires Enbridge to satisfy numerous specific conditions, such as ensuring that the pipelines are physically supported at least every 75 feet, are covered by a multi-layer coating to prevent corrosion and other physical damage, and are within certain curvature limitations. Enbridge, however, has failed for decades to meet these obligations under the easement, and these failures persist and cannot be cured. For these and other reasons, the state is revoking and terminating the 1953 easement," the state said.

Enbridge reached an agreement with then-Gov. Rick Snyder, a Republican, in 2018 to replace the underwater segment with a new pipe that would be housed in a tunnel to be drilled through bedrock beneath the Straits of Mackinac.

The company is seeking state and federal permits for the project, which is not affected by Whitmer's shutdown order regarding the existing pipeline.