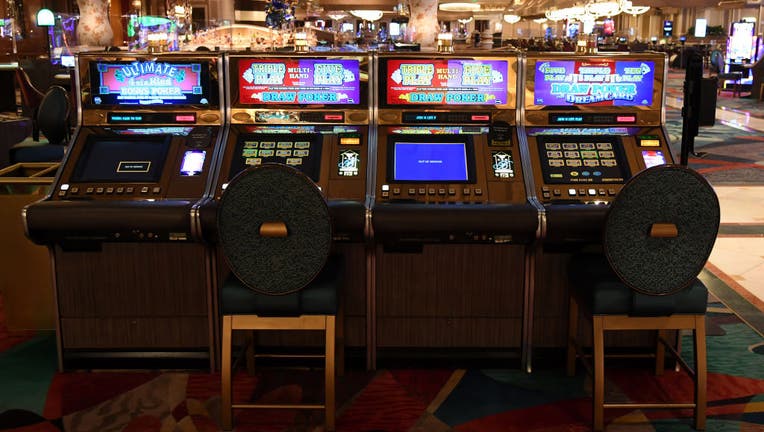 Socially-distanced video poker machines are shown with every other game out of service at Bellagio Resort and Casino on June 1, 2020 in Las Vegas, Nevada. (Photo by Ethan Miller/Getty Images)

FOX 2's Tim Skubick confirmed that Detroit's three casinos - MGM Grand, Greektown, and MotorCity - will soon be allowed to reopen under an order that has not yet been issued.

They'll be open with 15% capacity.

Gov. Gretchen Whitmer is expected to issue and executive order that allowed casinos in Detroit to reopen with limited capacity while also imposing restrictions on businesses up north.

Additionally, it will impose restrictions on bars and restaurants similar to what's currently in place in the rest of the state: the closing of indoor service. Whitmer closed indoor service on July 1 as the state's COVID-19 cases began to rebound. Outdoor service has been allowed to continue.

Throughout the entire month, Michigan's cases have continued to climb at a steady rate.

Bars and Restaurants were allowed to reopen on June 8.

Since then, bars have been linked to a growing number of large outbreaks, perhaps the best-known is in Ingham County where 107 confirmed COVID-19 cases were linked to a single bar.

Bars and restaurants were first shut down on March 16 and were only allowed for take-out or curbside service.

Some of Detroit's biggest moneymakers, the COVID-19 shutdowns have slashed revenues in the city's casinos by more than 50%. Compared with year-to-date revenue reported last year of $617.9 million, Detroit's three casinos only brought in $299.2 million They also didn't produce any revenue in May or June due to orders mandating they remain closed.

The lost revenue also means there was a $25.8 million decrease in tax payments to the state as well.

In the past few months, all three casinos have issued WARN notices that they would be laying off employees. Last week, MotorCity Casino said it would lay off 2,554 employees and end health benefits while MGM Grand Detroit issued said in May it would layoff 2,632 workers. Greektown gave notice in June that it would permanently lay off 621 employees out of the over 2,000 who were temporarily laid off.