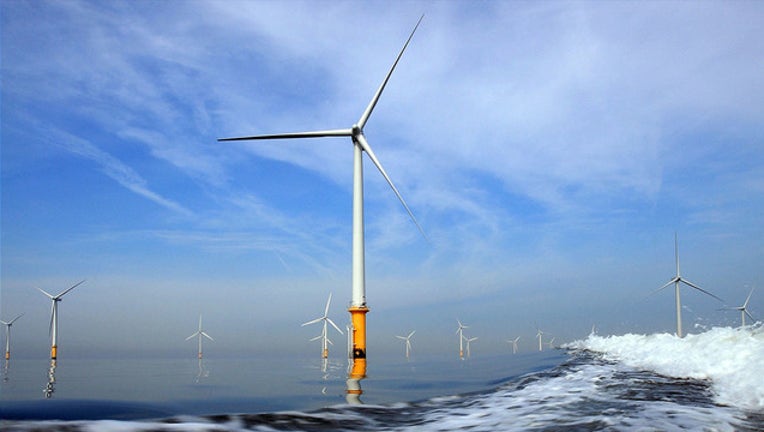 (FOX 2) - The Great Lakes are showing their quality again. - as they're being eyed as a source of renewable energy.

With miles of unobstructed space, where wind flows fast and frequent, it would make sense to anchor wind turbines on the Great Lakes. While the country has seen many proposals for offshore wind farms fail, the one planned for Lake Erie likely won't. All it needs is a sign-off from the state of Ohio.

A little more than a year from now, several brand new wind turbines could be sitting on the shores of Lake Erie in Ohio. What sets this project apart from others may have to do with it overcoming one of its biggest hurdles: public support.

“Perception, whether we like it or not, is often reality,” said Michael Ferguson, assistant professor of recreation, management and policy at the University of New Hampshire. “Their (stakeholders) perception, whether correct or incorrect, often gauges if projects like these can go forward.”

Project Icebreaker Wind will introduce a 20.7 megawatt wind farm eight miles off the coast of Cleveland. The wind turbines will provide power to 7,000 homes, act as potential habitat for local fish populations, and be the largest offshore wind farm in North America.

A rendering showing what the wind turbines will look like from the Ohio coast.

In a survey of 242 Pennsylvania anglers, boaters and beach-goers, Ferguson found that those key demographics supported the project. Ferguson only surveyed Pennsylvania residents but said the data could apply to anyone who uses the lake.

“You could argue they are the tip of the spear - individuals with firsthand interaction,” Ferguson said. “What we found is the support for the project cut across the political spectrum. All were likely to support it.”

Ferguson picked people that interact with the lake the most because they act as bellwethers for the general public. If fishermen and yacht owners don't agree with plans to change their sandbox, it's harder for projects to gain momentum. Other failed projects proposing offshore wind farms know all too well the power of public backlash and how it can impact the momentum of renewable energy going forward.

Cape Wind is one such example. The proposed wind farm off Cape Cod, Massachusetts had reached state and federal approval by 2010, before suffering a series of legislative setbacks. The project's lease rights were terminated in late 2017.

“That was in litigation for many years,” said Greg Keoleian, the director of the Center of Sustainable Systems, “then the project got killed. A big factor was NIMBY.”

NIMBY, or Not In My Backyard, is the reaction that people have to unsightly structures where they live and spend time. The ruin of Cape Wind won't befall Project Icebreaker Wind, however. It passed environmental inspections and reached investment milestones. Technology has improved making the initiative more profitable. And this time, it has public support.

“That's a huge factor,” Keoleian said. “People don't want turbines because they change the view-shed. But this is an exciting feature. People go to visit the Block Island project. It could be a positive for tourism, for boating.”

The Block Island project is the only offshore wind farm in the country - off the coast of Rhode Island.

Ferguson found a “surprising level of support” for offshore wind power. Because the future wind farm will enhance the area's economy with more jobs and increased tourism; it didn't matter how people felt about climate change or who they voted for; they still supported the project.

Offshore wind energy is also more efficient compared to onshore. With windier conditions occurring more frequently over water due to less obstruction, they're in use 40 percent more often than those on land. Compounding these benefits is their closer proximity to the source using their power; wind farms in central Michigan are farther away from the cities that use their power, so it takes more energy to transmit that electricity to the user.

The turbines won't just provide carbon-free electricity, but possible habitat for fish as well. Benefits like these have professors like Keoleian making bold predictions about the energy future.

“I would definitely expect we are going to see more wind farms in the Great Lakes in the coming decades,” he said.

The project, which started with a $40 million grant from the U.S. Department of Energy in May 2016, now has planned construction for summer of 2020 with completion and operation expected by November of 2020.