LIVONIA, Mich. (FOX 2) - The activist group behind a head-turning billboard on racial profiling in Livonia hoping to raise money to help them achieve their ultimate goal - get the police department's traffic stop data.

Livonia Citizens Caring About Black Lives put up the billboard. It reads, 'Driving while Black? Racial profiling just ahead. Welcome to Livonia.'

The activist group behind a racial profiling billboard is raising money to fund their request to obtain traffic stop data from the city of Livonia, where they allege police engage in racial profiling.

The newly-formed group is demanding change, alleging Livonia police have engaged in racial profiling for years. With the billboard raising awareness, they want to see data on traffic stops in the city.

"We've asked for a traffic stop data that includes race, initial reason for the stop and then the outcome of the stop," Delisha Upshaw told FOX 2 last week. "We want to know how we're policed."

"If they were up to speed on the actual stops that their officers were making they'd be able to provide that data relatively easily," Sara Overwater, another group member, told FOX 2. 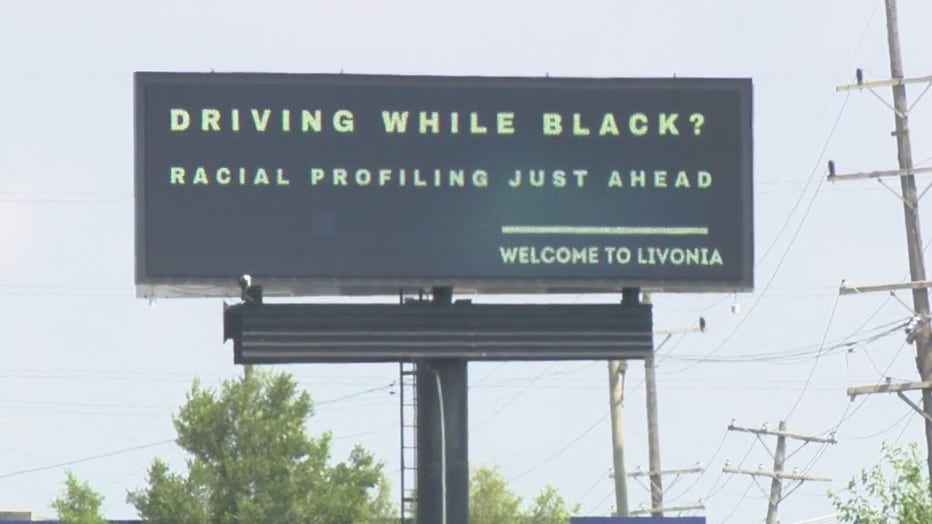 But now the group has learned that data comes at a hefty price.

In the letter, Livonia Police told the group that the volume of information they're seeking will result in a high cost to its department. Therefore, a fee of half of the estimated cost - $13,084 - is required to start processing the request.

"Which is far too much for one citizen taxpayer to provide," Overwater said. "I have spoken to lawyers and they say these things can run up and get expensive because of the time involved in collecting data."

Despite being hit with that bill, the group says it will not lose sight of its goal and they are asking for the community's help. The citizen group started a GoFundMe account to get the money needed to review the police data.

"We're asking for any donations to fund our Freedom of Information Act request," Overwater said.

FOX 2 reached out to Livonia Police and the city's attorney, Paul Bernier, responded with this statement, which reads in part:

"The City had already reached out to this group to request a meeting, looking to discuss ways we can help them get the information they request in a less expensive way."

But as the group works to raise the funds, its members say they already see some progress. As they work with the city's mayor, Maureen Miller Brosnan, who told FOX 2 in a statement on Wednesday:

"This billboard may advance division. It most certainly will not advance progress - something I am very committed to doing."

"She is taking a strong stand against racism in Livonia and shares the idea of making it a welcoming place for all," Overwater said.