DETROIT (FOX 2) - Detroit police are investigating after a group of unruly drivers in cars and ATVs took to the streets again on Super Bowl Sunday.

It's the same group that shut down I-94 in December - and our cameras even captured the 22-year-old who's facing charges from that incident behind the wheel of another car in this latest event.

A 22-year-old man who's facing charges after stunt driving on I-94 in December, shutting part of the freeway down, was seen again on the streets with other stunt drivers on Sunday.

The group posted a memo to their followers with the schedule, with a plan to hit eight locations. FOX 2 caught up with them at Livernois and Warren.

ATVs joined the mix, even chasing scout cars when Detroit police came to break it up. Dozens of bystanders ran to get out of there and onto to the next location. It went on like this into the night. 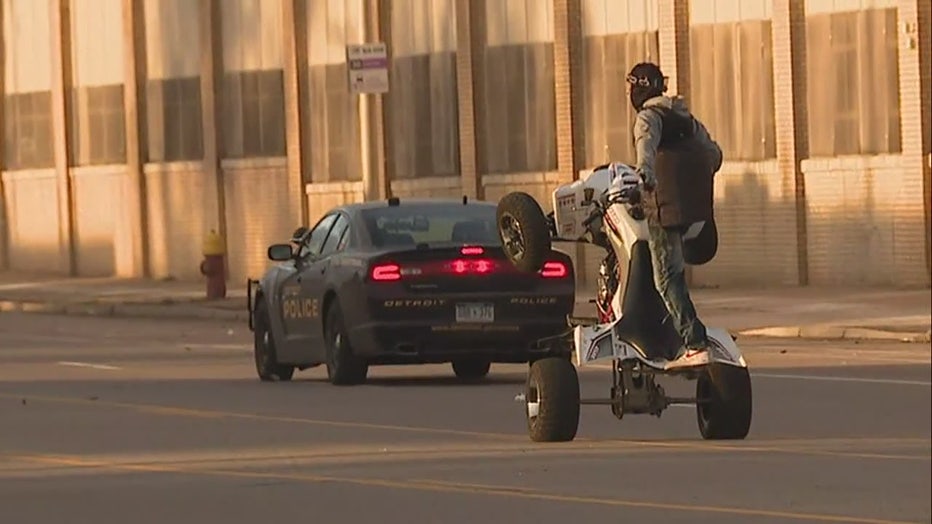 The group behind this, TSNLS, which is an acronym for Turnt [expletive] No Lame [expletive], went viral after a video surfaced in December when they shut down I-94. Devin Cronk, the alleged driver of the orange Camaro seen in that viral video has been charged with reckless driving - but his upcoming court date didn't stop him from joining in Sunday.

A video posted on social media puts Cronk right in the mix. You can even see him driving right past our cameras without a license. You can check out the video in the video player above.

"When you decide to take over a freeway anywhere, you post significant danger to our community," Chief James Craig said in December, when he vowed to crack down on stunt driving in Detroit after the I-94 incident.

Sunday Detroit police unleashed resources, even a chopper, to break up drivers.

911 calls continued to come in Sunday night with reports of 50 plus people street racing at multiple locations. Our crews saw first-hand it's like a game of whack-a-mole to catch them.

Chief Craig says he has been working with these groups to come to some resolution, even discussing opening up a drag strip for a safer place to drive.