But as the months dragged on, Debra Westbrook says she did not have a finished headstone and reached out to the company.

FOX 2 - A Metro Detroit woman was already mourning the death of her husband, is now struggling to find a way to honor his life. She claims she paid cash for a headstone - but months later, the company appears to be out of business.

"I’m just devastated, I’m frustrated, because this is the final piece for my husband to be at rest - this headstone," said Debra Westbrook.

Nearly a year after losing her husband Michael to Covid in 2020, Debra Westbrook entrusted the company Marsh & Sassi to make a headstone for her.

"I paid for a black granite headstone with a base, I paid for his photo to be on there - the epithet," she said.

Last summer Westbrook paid the full amount owed for the headstone, a total of $1,600.

"They said it had to be paid for completely in advance," she said. "I paid her the total price in cash, I do have a receipt for that."

But as the months dragged on, Westbrook says she did not have a finished headstone and reached out to the company.

"She finally reached back out to me in December of 2021, explaining to me that the headstone is complete," Westbrook said. "It had to be dried and she would send me a picture."

But Westbrook says she had difficulties getting in contact with the company and received a "not in service message" when she called.

This text message dated December 9th is the last time Westbrook heard from the monument company in Detroit so Westbrook went to their second location in Clinton Township earlier this year.

"I visited out there to her Clinton Township office twice, the first time it was closed and second time  - it’s now a sandwich shop," she said.

Westbrook contacted the FOX 2 Problem Solvers for help. On Tuesday, we caught up with owner who took over the business after her husband passed away from COVID-19.

"I gave her a phenomenal deal, she purchased it at our Clinton Township office at the time; that was the second location, but after the death of my husband the lease expired, and I did not renew the lease," said Joelle Wright-Terry, the owner of Marsh & Sassi Monument Company.

Wright-Terry says she had explained to Westbrook why there was a delay in completing the headstone, starting with supply chain issues.

"We had to wait for that stock, she was informed that, once we got the stock in, I immediately cut her stone," Wright-Terry said.

The monument company owner calls it a case of miscommunication and that the headstone is finished.

FOX 2: "It’s not done because the picture is not on there."

"Most definitely, if not less," Wright-Terry said.

The Better Business Bureau said that the Marsh & Sassi Monument Company had an "F" rating.

"The Marsh & Sassi Monument Company has an F rating with the Better Business Bureau," said Ashley Gibbard, of the BBB, in a statement. "They have had two complaints filed against them in the last three years, one in 2019 and one in 2022. The one in 2019 stated that they purchased and paid for a memorial that had not been delivered almost a year later."

Westbrook said she hopes that her husband will soon get the headstone he deserves.

"It will allow him to Rest In Peace," she said. 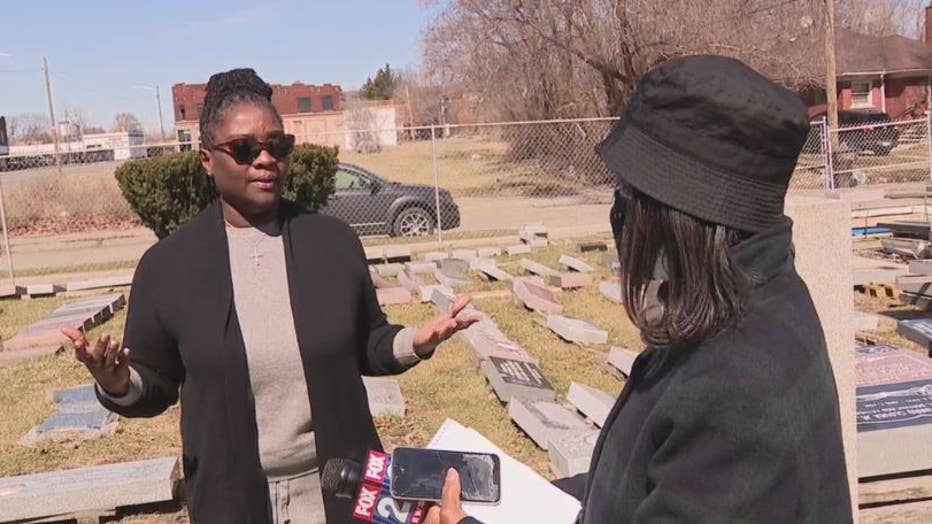