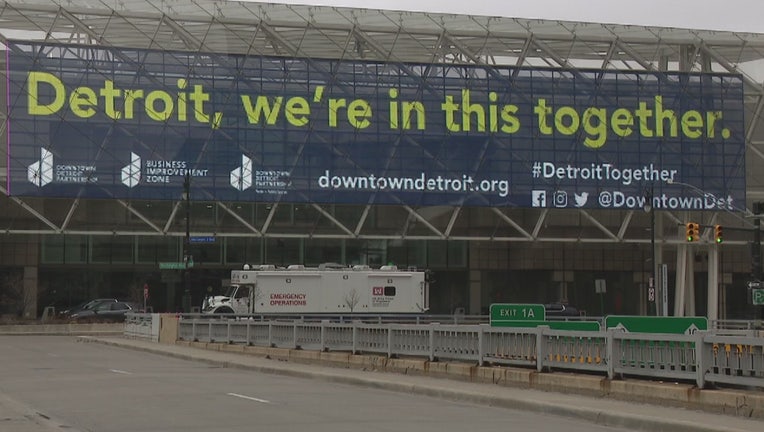 Michigan, especially Detroit and surrounding communities, has been one of the hardest-hit states. As of Thursday, it had more than 20,000 cases and 959 deaths. More than 3,800 patients with COVID-19 were in a hospital as of Wednesday, about 1,400 of them on ventilators.

The TCF Center is set up to have 1,000 beds and will receive patients from other southeast Michigan hospitals at least 48 hours after the person has been admitted as an inpatient. The center will not accept patients by ambulance or walk-up, and it will not have an intensive care unit area or provide care to patients who need ventilation.

Each of the health care systems participating are bringing critical resources to the effort.

While the four health care systems have volunteered key leadership positions and personnel at the alternative care facility, it will largely be staffed by a Public Health Strike Team, through FEMA.

Right now Detroit has 6 percent of Michigan’s population but has had more than 25% of the state’s virus cases and deaths.

Though earlier this week, Mayor Mike Duggan said area hospitals told him that the number of new admissions compared to the number of discharged patients was “flattening out.”

"It’s going up more slowly than what we had seen. ... If we do this right, we might not have to have a thousand beds at the TCF Center,” said the mayor, a former hospital executive.

He added the coronavirus is “starting to weaken” in Detroit, but he also pleaded with residents to keep the momentum going by wearing masks and avoiding large groups.

The coming cooler weather could also help discourage outdoor gatherings: After temperatures reached 70 degrees in parts of the state Wednesday, they were expected to top out in the 40s and 50s starting Thursday and stretching into next week.