MONDAY NEWS HIT - Backed by positive metrics and growing public pressure, the state of Michigan pivoted last week, permitting the restart of contact winter sports that were suspended due to the pandemic.

Monday is the first day back for student-athletes that participate in sports like hockey, basketball, and competitive cheer.

The reopening is good news and a sign of an improving health crisis in Michigan. But that doesn't mean student-athletes and people affiliated with the team won't still need to abide by rules.

"Because we continue to see our metrics trending in the right direction, we can move forward with allowing contact sport practices and competition with specific public health measures in place, like masks and testing," said Dr. Joneigh Khaldun.

Michigan's amended order will remain in place until March 29.

After a late-week announcement a few days ago, competition and practice for Michigan's high school sports will be allowed to resume Monday. The order lasts until March 29.

Under the order, participants in contact sports must wear masks in situations where social distancing cannot be maintained. If both measures aren't possible, then the sport must conduct extensive testing to avoid infection.

For a solid two weeks, public health orders from the governor had come under fire for their inconsistency in allowing restaurants to reopen and pushing for schools to go back to the classroom, but not allowing some sports to be played.

Whitmer cited the emergence of a new Covid variant as why she kept things closed down. She also cited positive rates of new infection and hospitalization as why she changed course, despite the suspension originally scheduled to last until late February.

Among the arguments cited by critics was the burden of stress on students and the outlet that sports provides for them. But if that's taken away, it could exacerbate issues for them.

The American Automobile Association, or what most people know as Triple A, has issued an Arctic Air Advisory for Michigan, due to a brutal stretch of forecasted temperatures below freezing and even below zero.

With expectations that temperatures will reach some of their coldest this year, the focus turns to vehicle functionality, which extreme cold can wreak havoc on.

A few tips for those with a car or truck: make sure the battery is fully charged, enough gas is in the tank, and that there's enough windshield washer fluid. Also, be ready for frozen doors and park inside a garage if you can. Tarps can also protect vehicles from the wind.

As an additional warning, several warming shelters will open around Detroit and the metro region due to threats of the cold.

A 26-year-old man has died after an explosion occurred at a baby shower at a home southwest of Flint around Saturday night.

Michigan State Police say a Hartland man standing nearby was struck by shrapnel after a cannon was fired to announce a baby's pending arrival.

He was taken to a nearby hospital in Flint and would later die of his injuries.

The shrapnel also struck three parked cars and a garage where the baby shower was being held. The Michigan State Police Bomb Squad also responded to the explosion.

Law enforcement is investigating a vehicle fire reported on the fifth floor of a parking garage after a University of Michigan staff member says he was assaulted and was knocked unconscious. When they awoke, their vehicle was on fire.

The victim says he was attacked at approximately 7:50 p.m. in the Michigan Medicine P1 parking garage Saturday night. The Ann Arbor Fire Department responded and extinguished the fire.

The victim was transported to the emergency department where they were treated and released.

No witnesses saw the incident happen and the University of Michigan Police Department is investigating. Currently, the public safety department doesn't believe there's a threat to campus. 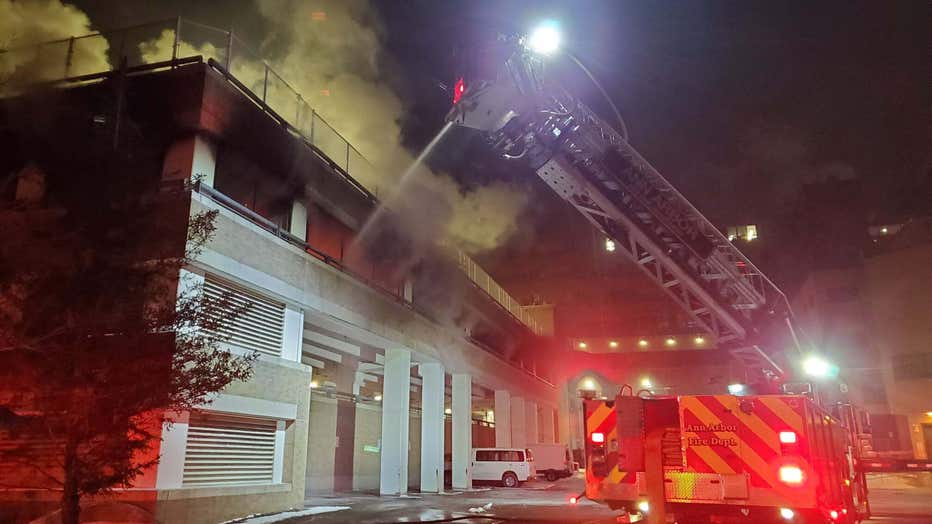 The Clinton River, which runs through parts of Macomb County, is one of three southeastern Michigan rivers expected to be studied as part of an effort to improve water quality and wastewater treatment in the region.

Sensors will be installed in the river in Sterling Heights and in Clinton Township, north and northeast of Detroit.

Both sites already have gages to monitor the flow and height of the water. The new sensors will enhance monitoring capabilities at each site.

What we've got our eye on

If you thought the weekend was cold, get ready - because the freezing has just begun. Temperatures will stay in the teens Monday. There will be some flurries today and tonight as well.

We'll see some snow tonight too!

UAE, China and US spacecrafts will reach Mars in quick succession

After hurtling hundreds of millions of miles through space since last summer, three robotic explorers are ready to hit the brakes at Mars.

The stakes — and anxiety — are sky high.

The United Arab Emirates’ orbiter reaches Mars on Tuesday, followed less than 24 hours later by China’s orbiter-rover combo. NASA’s rover, the cosmic caboose, will arrive on the scene a week later, on Feb. 18, to collect rocks for return to Earth — a key step in determining whether life ever existed at Mars.

Both the UAE and China are newcomers at Mars, where more than half of Earth’s emissaries have failed. China’s first Mars mission, a joint effort with Russia in 2011, never made it past Earth’s orbit.