DETROIT (FOX 2) - A Detroit veteran of the Navy and the Army was in desperate need of help with his home. All it took was a Facebook post answering the call for help.

William Underwood is an American hero. He served in the Navy and the Army but has fallen on some tough times, specifically around his home.

A Detroit veteran who was trying to fix up the home himself found the porch in severe disrepair. Then someone stepped in and asked for help.

"Well, the porch is about to cave in - the front and the back - and I'm just thankful. I didn't have the help and it's not like I can call the 82nd airborne to help me," said underwood.

Grace Bayer with Sister Judie's Outreach realized there was a problem here. She delivers lunches in the neighborhood to people who need them. She passed the home and noticed it was in disrepair.

"I'd see the porch was leaning. I was so worried that they would fall off the porch. his brother was disabled and I always worried about them," said Bayer.

So she put a call out on Facebook and someone stepped up to tear down the leaning porch. Someone else stepped in with a dumpster, and, on Thursday, The Home Depot came in to build the new porch for Underwood and his disabled brother.

"It means the world to them but also just by the showing of how many people showed up, shows how we feel about what they've done for us," said Tom Gibbons with the Home Depot

"I think it means everything. He's such a wonderful person and now he'll be safe - him and his brother both - getting in and out of the house," Bayer said.

Underwood took over the home from his elderly relatives to help them. He's been working on the house as much as he can but it was in sad shape.

"They were living like the Beverly hillbillies," he said.

After fixing windows and making the house overall safer, he's got help to finish the job. 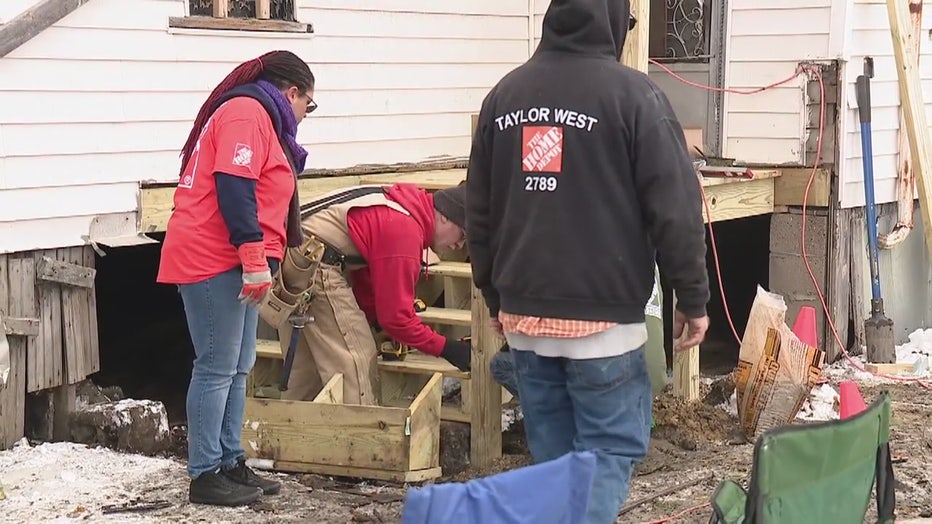