Jurors heard the 911 call from a dying teenager killed alongside her sister in 2008. Their father is on trial for the murders.

DALLAS, Texas - Jurors heard the 911 call from a dying teenager killed alongside her sister in 2008. Their father is on trial for the murders.

The dramatic 911 call was played in court during the murder trial of Yaser Said on Wednesday.

Investigators say Yaser Said murdered sisters Amin and Sarah in 2008 in so-called "honor killings" for dating outside their faith.

Said disappeared simultaneously with the girls' murders and eluded police and the FBI for 12 years before he was finally captured.

The prosecution played the 911 call allegedly made by Sarah on the night of her death.

WARNING: THE CONTENT OF THIS VIDEO MAY BE DISTURBING

Investigators say Yaser Said murdered his two teenage daughters, Sarah and Amina, in 2008 in so-called ‘honor killings’ for dating outside their faith.

The jury listened intently to the dying declaration on 911. The caller said she had been shot by her father and was dying.

Said showed no emotion as cries for help played in court. Some jurors seemingly fixed on the father. Other observers in court sat wide-eyed as the call went on.

Said, who has pled not guilty to capital murder charges, at times turned to one of the defense team and talking even as the chilling call played.

Detective Kevin Hubbard, a dispatch supervisor, and the Irving Fire Department tried to get information from the unidentified caller but couldn’t while taking the call on New Year's Day 2008.

"I ask her what’s going on, she says I’m dying, that’s what’s up," Hubbard said.

Defense attorney Joe Patton tried to show the 911 call should not be admitted, as the state described it.

"So you don’t know if they’re dying?" Patton asked.

"I can only take it for the words they give me," Hubbard said.

"So you cannot testify this was a dying declaration? You have no idea what condition that person was in?" Patton asked.

Jurors heard the 911 call from a dying teenager killed alongside her sister in 2008. Their father is on trial for the murders.

"At the time I took the phone call, no," Hubbard said.

Patton objected and wanted the call stricken from the record.

Amina and Sarah said were both shot to death sitting in an orange jet taxi. That taxi was in line with cabs waiting for fares outside what was at the time the Omni Mandalay.

Nathan Watson ran guest services at the hotel in 2008.

"The doorman told me there were a couple of people in a cab that were hurt really bad and that I needed to come out to the front drive," he said.

What Watson saw in a cab caused him to call 911. 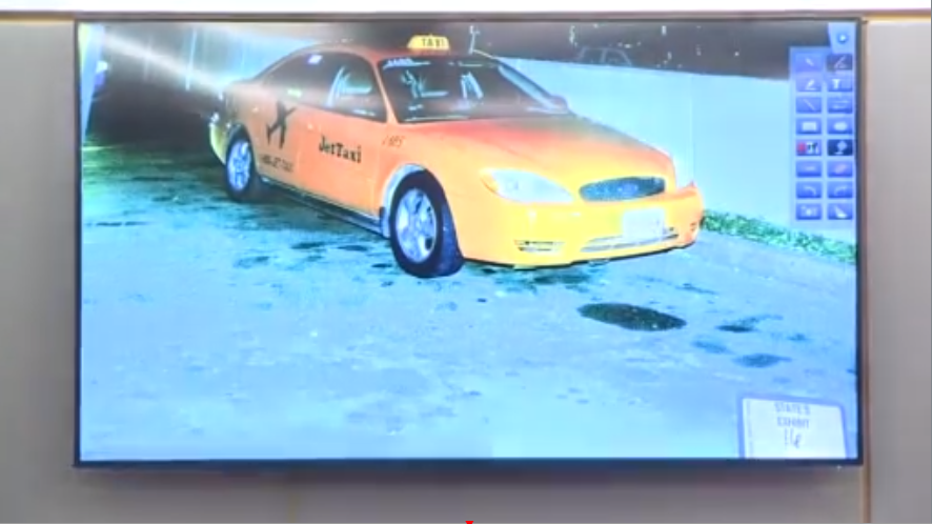 "One of the people in the passenger seat looked like she’s hunched over," he recalled. "You don’t see a driver anywhere. There’s someone in the back as well."

Defense team member Baharan Muse pressed whether anyone said that Said was at the hotel that night.

"Nobody said they saw him that night. Is that correct? None of your employees?" she asked.

"I don’t know. I didn’t ask my employees if they had seen him other than if they’d seen the driver from the cab," Watson said. "And I was told that nobody had seen the cab driver."

The jury also heard from former law enforcement who responded and worked the scene the night the teens were killed.

Crime scene photos put the courtroom in the moment when now-retired Irving Officer Richard Bracey arrived on scene. He was questioned by prosecutor Brandi Mitchell.

In the murder trial of Yaser Said former Irving police officer Richard Bracy describes finding the taxi cab with the bodies of Sarah and Amina Said inside.

Bracey was the first law enforcement on scene and checked the girls for signs of life.

"I told dispatch we have two dead at the scene, and I need more units," he said.

Photos of the cab were shown in court. Jurors were shown multiple shell casings inside the cab, including one on the floorboard and a magazine in the driver’s side door. The taxi’s backseat was also bullet riddled.

Former Irving PD investigator Steven Hazard said, based on the evidence he collected, all those bullets were shot by someone sitting in the front of the cab.

"The weapon was very, very close to the victim," Hazard testified.

He testified he visited the Said home after the shooting. He said the girl’s mother and brother were home.

The mother, Said’s wife, confirmed Said did have a semi-automatic handgun.

The defense asked for a mistrial, saying the state had subpoenaed witnesses they didn’t know about because that information was restricted in the county’s online record system. The judge said no to their mistrial request.

If convicted, Said will face life in prison.