DETROIT (FOX 2) - When the Detroit Lions play in Lambeau Monday night, quite a few things will feel, well, different. First off, the Lions are on Monday Night Football on FOX 2. And the second thing? Is the white-on-white uniforms.

Let's get the game information out of the way. The Lions will play the Packers at 9 p.m. on FOX 2. The Monday Night Football game is being done by the team at ESPN but FOX 2 will broadcast the game locally for Detroit viewers.

Just like every other Sunday game, we'll get you started with FOX 2 Gameday Live starting at 7 p.m. 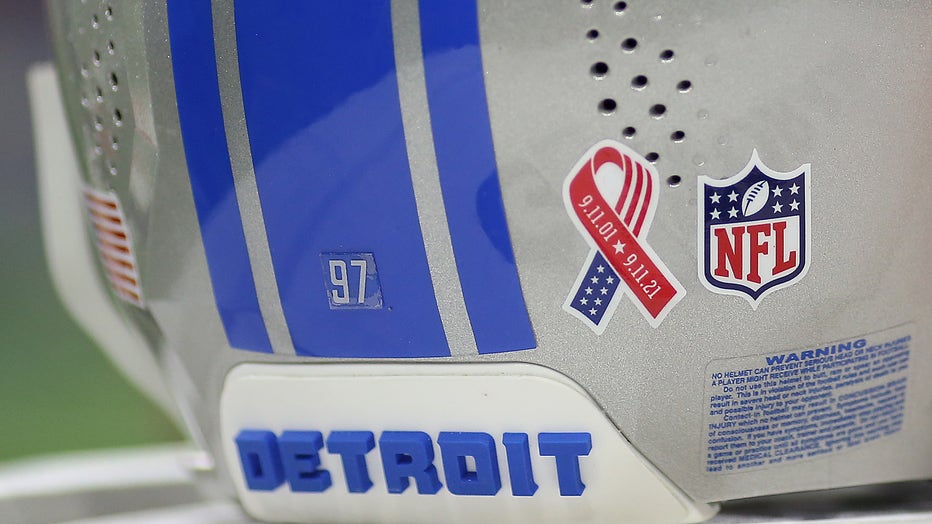 A detail of a 9/11 tribute sticker on the back of a Detroit Lions helmet prior to the game against the San Francisco 49ers at Ford Field on September 12, 2021 in Detroit, Michigan. (Photo by Leon Halip/Getty Images)

The game kicks off at 8 in Lambeau Field in Green Bay as the Lions and the Packers are both looking for their first win of the short season and you can watch it all on FOX 2.

So once the game starts, let's talk about what the 2021 version of the Lions will look like. Last week, the Lions nearly completed a miraculous comeback after scoring two touchdowns inside of two minutes, recovering an onside kick, and recovering a fumble.

However, the deficit to the San Francisco 49ers was too great as the final drive stalled at the 49er 25-yard line and the lions Lost 41-33.

For the big primetime game, the final game of week 2 of the NFL, the Lions will show up with a look we haven't seen before: white on white.

The Lions are going all white for the away game in Lambeau - a field with grass, meaning the equipment guys are likely to have their work cut out for them after the game, regardless of the outcome.

Look away, Lions fans. The packers are favored by 12 points - meaning they're the BIG favorites. Now, that's less than two touchdowns but is still a two-possession difference. Could the Lions cover? Sure, they could. Are they expected to? Uh…no.

"The Packers got embarrassed last weekend, losing 38-3 to the New Orleans Saints. They are a veteran team and will bounce back against a Lions team that made a furious comeback to make their loss to the San Francisco 49ers look closer than it was. Let's not forget the Lions were down 41-17 in the fourth quarter. The Packers will dominate on Monday Night."

For more about the point spread and the over/under, check out our How to Bet article here.