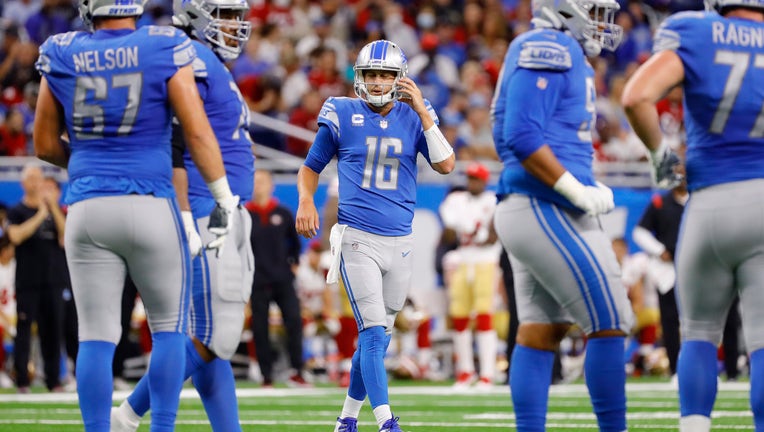 DETROIT, MICHIGAN - SEPTEMBER 12: Jared Goff #16 of the Detroit Lions looks at the scoreboard in the first quarter of the game against the San Francisco 49ers at Ford Field on September 12, 2021 in Detroit, Michigan. (Photo by Leon Halip/Getty Images

DETROIT (FOX 2) - The Detroit Lions nearly completed a miraculous comeback in the season opener at Ford Field but ran out of gas after scoring two touchdowns inside of two minutes, recovering an onside kick, and recovering a fumble.

Lions (0-1) new quarterback Jared Goff tried to will the team to a victory but the final drive died at the San Francisco 25 yard line.

The Lions were down 41-17 at the two-minute warning and scored three touchdowns and successfully completed three two-point conversions to force overtime.

The first touchdown was a 1-yard run for Jamaal Williams with a two-point conversion pass to TJ Hockenson to bring the Lions to 25 points. The Lions recovered the onside kick and quickly drove down the field and scored again.

This touchdown was to Quintez Cephus on a beautiful fade pass from Jared Goff. The only thing prettier was the 2-point conversion pass to Cephus, when dragged his two feet.

The Lions missed this onside attempt and the 49ers were at 3rd and 13 inside Lions territory and San Francisco 49er wide receiver Deebo Samuel had the first down until a fumble. The Lions recovered and Goff led Detroit to the San Francisco 25 yard line.

That's when the drive stalled.