A little more than a week since the Oakland County Health Department said masks are required in schools, protesters appeared at the Board of Commissioners meeting to demand a change.

PONTIAC, Mich. (FOX 2) - Protesting parents Thursday feel that Oakland County is overstepping its bounds with this school mask mandate. They say the decision about wearing masks should be up to school boards and parents — not the county executive and health department.

Hundreds gathered outside the Board of Commissioners meeting in Pontiac Thursday in protest of the county’s school mask mandate.

"You’ve got somebody in grade school, she’s got asthma, she’s got severe allergies, they’re masking her up, she wears glasses, she can’t see," said parent Cindy Penrod.

"It’s wrong, the masks don’t prevent the virus from spreading. the particles are so minuscule that mask doesn’t prevent anything from hurting you," said parent Jeanette Wareham.

There were only a handful of people in the crowd that support the mandate.

"There is great evidence that masks to prevent the spread of the virus," said parent Sherri Masson. "And I think it’s a shame the way it’s been made so politicized and has become so divisive.

"I am utterly disgusted by what is taking place not only in our schools but in our county."

Only a few people were allowed inside the meeting. Capacity in the auditorium was limited to 67 people including the board. Half of the seats were roped off—but most of the remaining seats were empty.

Mandate critics felt there was more than enough room for them to be allowed inside.

"They are denying all of us the right to come to this open meeting of the board of commissioners and I’d really like to know why," said Colleen Zammit.

FOX 2: "You think they’re trying to stifle your voice on this issue?"

"Absolutely I think they’re trying to stifle our voice," she said. 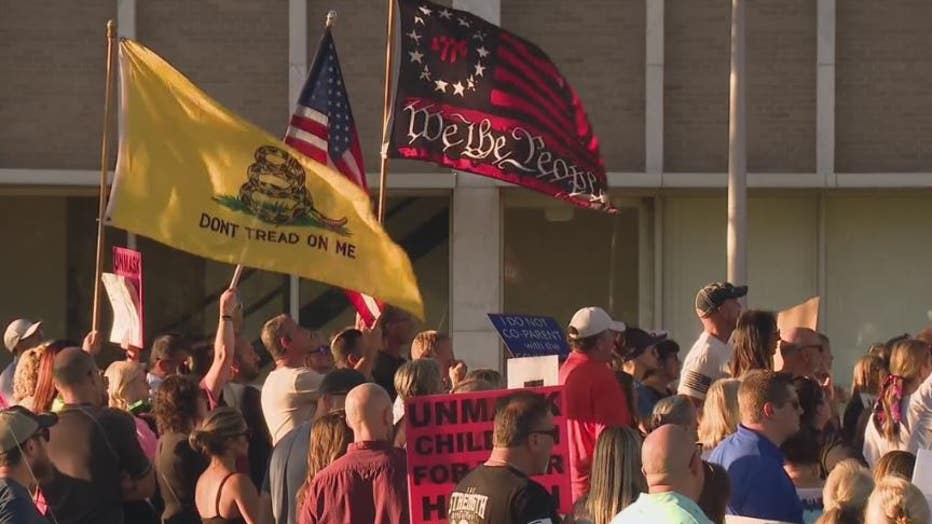 "We have a capacity that’s come down from the health department and the county executive for all county facilities," said Michael Spisz, (R) Oakland County Board of Commissioners. "This was in place way before the health order came down."

Republican commissioners put forth a resolution asking Executive Dave Coulter and the health department to reconsider the mask mandate.

"The health order has to do with the CDC ranking in Oakland County and if you look at the data from the CDC, about 95 percent of the country is in the high-ranking," he said. "So is that really a good data point to be used to determine if masks are a requirement or not?"

"We want to make certain that our kids can go to school, be in school, in-person school we know is the best choice, the right thing to do," said Dave Woodward, Oakland County board of commissioners. "And in order to do that, we have to take every step necessary to protect kids."

The chairman of the commission's Republican Caucus said there have been some sidebar conversations about a compromise in regards to the mandate, but there has not been a lot of progress.