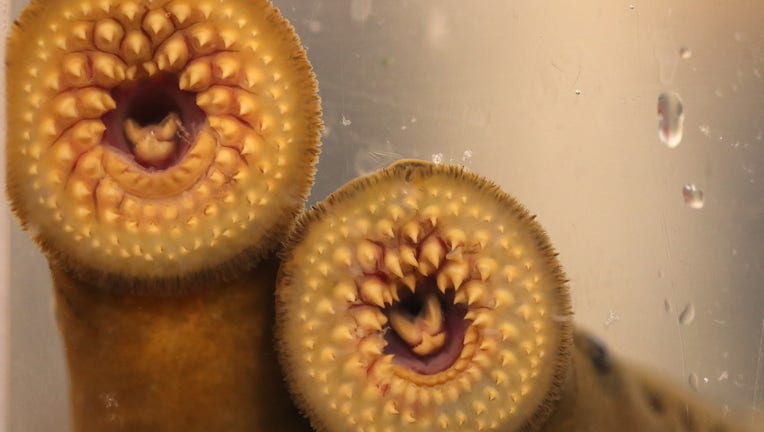 TORONTO, ON- OCTOBER 29 - The mouth of a Sea Lamprey features 150 teeth and a tongue that is cerated. A behind the scenes look at the Royal Ontario Museums Invertebrate Zoology Lab with the bloodthirsty creatures of the original exhibition Bloodsucke

FERNDALE, Mich. - One hundred years ago, the first sea lamprey ever discovered in the Great Lakes was captured when a commercial fisherman pulled one out of Lake Erie. Over the next 40 years, the primitive, parasitic, vampiric fish wreaked havoc on aquatic populations in the ecosystem.

Considered one of the gravest threats the Great Lakes ever faced at that time, it also resulted in one of the greatest collaborative efforts in environmental restoration in the region.

Since then, lampricides and dams have disrupted the invasion of sea lamprey and cleaved at least 90% of their population. But scientists are questioning if broader goals - complete removal of the species - are possible.

"The control techniques we use today are enormously effective," said Marc Gaden, communications director and legislative liaison for the Great Lakes Fishery Commission said. The 90-95% reduction is "unheard of on the scale we're talking."

New techniques like influencing the pheromones to repel or lure sea lamprey are already being field-tested. If successful, they'll become the latest tool scientists can equip if other measures fail or become too expensive.

However, a new realm of research into genetic modification has the potential to completely remove sea lamprey from the ecosystem entirely. Scientists don't normally aim that high when managing non-native animals and fish. The environments are too big, the species have too much food, and there are too few predators to stop them from spawning.

"Here's what's alluring (about genetic modification), it could lead to eradication. Right now, as successful as we are, no one is talking about eradication," Gaden said. "Chasing that last pair is not considered to be possible. It's not like cleaning up an oil spill where nature eventually breaks down. These invasive species will always make more of themselves."

Sea lamprey are emblematic of what kind of terror a nonnative species presents to an uninvaded ecosystem.

"Destructive beasts," as Gaden calls them, the first one was found above Niagara Falls on Nov. 8, 1921. The simplicity of their feeding habits is part of what makes them so effective as hunters - and even more horrifying to look at.

Sea lamprey use their mouth and razor-sharp teeth like a suction cup to latch onto a fish when they want to eat. With the aid of an equally-sharp tongue, they'll flip it around, cutting into the fish's scales. From there, they feed on their blood and body fluids. It's not a pretty visual.

For the 18 months, they spend as adults, they can kill an estimated 40 pounds of fish. Meanwhile, the females can spawn up to 100,000 eggs, making them very good eating and reproducing machines. 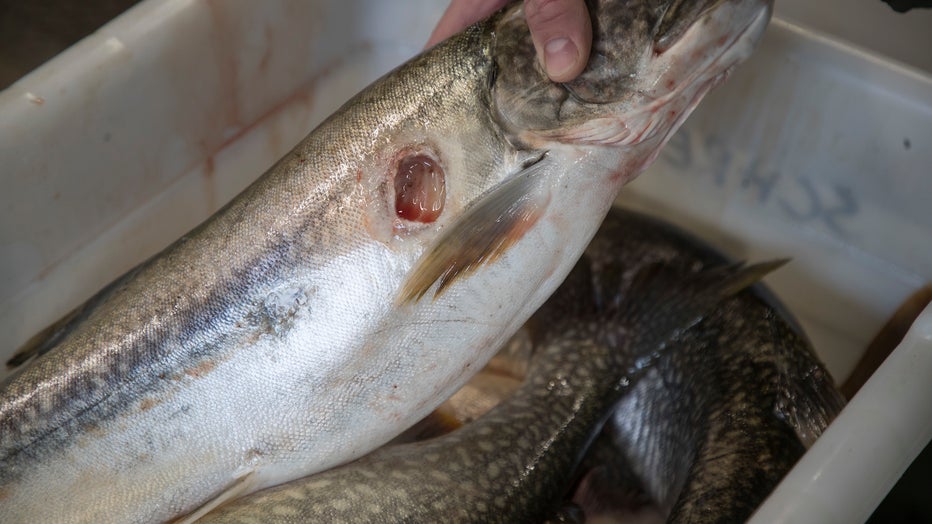 According to a Great Lakes Fishery Commission report, since their discovery in 1921, they spent two decades of feeding and reproducing, lacking any predator to keep their populations at bay. Meanwhile, the commercial and recreational fishers in the Great Lakes became brought to the brink of extinction.

Only one in seven fish would survive a sea lamprey attack.

"The three and a half decades between the discovery of the first Lake Erie sea lamprey and the formation of the sea lamprey control program were some of the bleakest on record for the Great Lakes fishery," read the report.

The collaboration required to take on sea lamprey would be on a scale rarely imagined once it was created. Two countries, several states, and dozens of government agencies all had a stake in recovering the billion-dollar fishery industry.

Despite the challenge ahead, the science used to find a weakness was pretty basic - relatively speaking.

Researchers needed a way to kill sea lamprey before they did any damage, without killing the fish that used the same body of water. Selectively attacking one organism while leaving the other unharmed means isolating certain chemicals among myriad options.

For seven years, researchers at the Hammond Bay Biological Station in the northern Lower Peninsula of Michigan looked for a solution. They would fill big glass jars with water and place both fish and larval lamprey inside of them. Scientists then placed a chemical dose in the water, leave it for 12 hours, then come back and see what was still living.

"Most of the time, both were dead or swimming happily. Or the fish were dead and the lamprey were just fine," Gaden said. 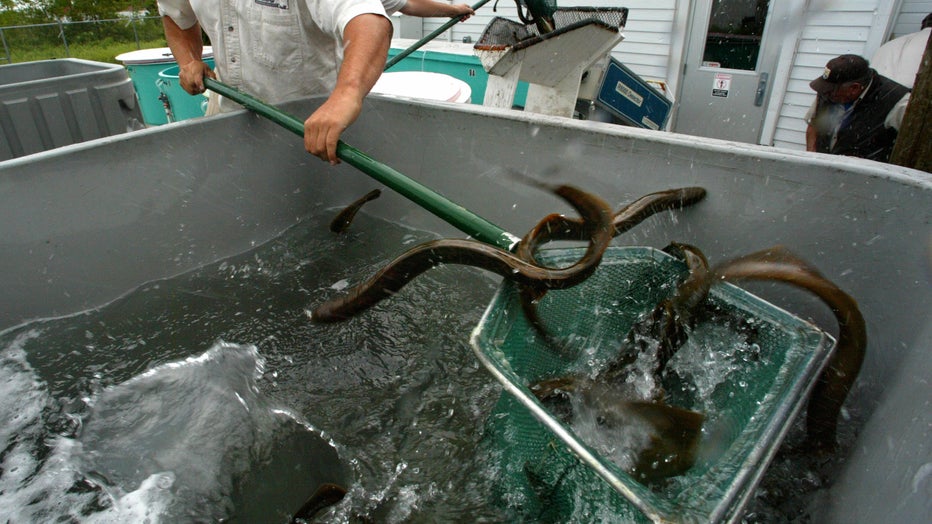 Jerry Dunbar, a science technician at a sea lamprey research station near Rogers MI., nets sea lamprey from a holding tank as they are brought to the stationfor sterilization from rivers feeding into the Great Lakes. (Photo by MARLIN LEVISON/Star Tri

Eventually, scientists zeroed in on a chemical identified as TFM - the golden ticket.

Since its discovery, TFM has been applied to 120 streams considered feasible habitats for lamprey. The life cycle of sea lamprey - 30-36 months as harmless larvae and 12-18 months as fish killers - means the application of the lampricide only needs to happen every three to four years per stream.

A more arbitrary solution that can have negative consequences for other biology that also use the streams, physical barriers like dams disrupt the migratory patterns of lamprey and keep them from accessing habitats for females to lay their eggs.

Michigan has plenty of dams. Built for generating power, creating lakes, or building recreation sites, the department of natural resources estimates Michigan has more than 2,500 dams.

Gaden says the network of scientists working on lamprey think in terms of decades. New control methods can be cheaper, while older techniques may become less effective. That's why the science continues.

Researchers think pheromones may be the next big thing. Since sea lamprey navigate waters using their nose, they have an acute sense of smell that scientists hope to exploit. Over the last 20 years, science has found scents that can both attract and repel sea lampreys.

Field testing is still being performed, but the idea would be to strategically apply the pheromones to push lamprey away from habitats or toward traps.

"Any good pest management program is diverse so that not all of one's eggs are in one basket," Gaden said. "We want to attack from multiple angles so we're focused on finding better ways to supplement existing control techniques." 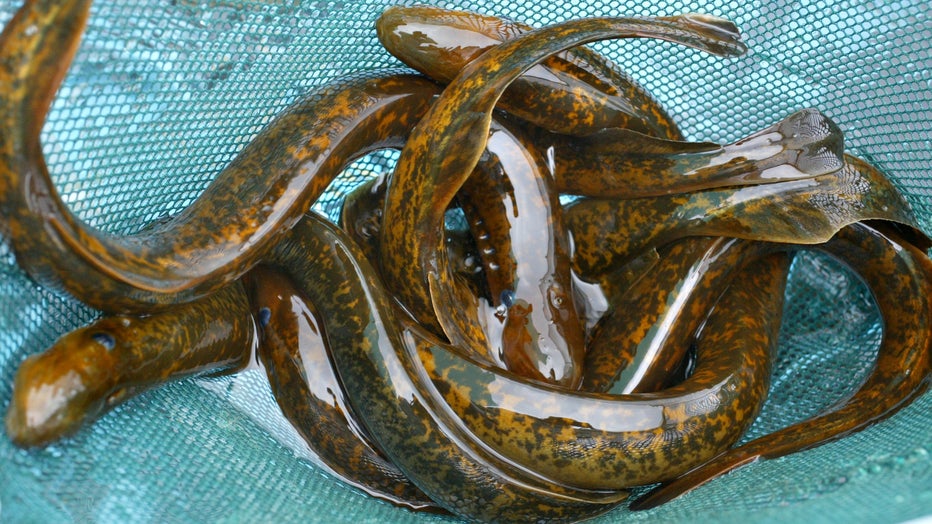 But new methods can take years to develop and millions of dollars of funding. And even after a solution is devised, the effects on the environment are unknown until they're tested. That process requires a delicate balance of real-world emersion that won't upset the original ecosystem, but still targets the invader causing problems. As sea lamprey have shown and as the threat of Asian carp grows, a single species can have drastic effects on a food web.

It can also have major implications for stakeholders, including the region's $7 billion fishing industry.

Some control methods may also fall out of favor with the public. The moral and ethical question of how to approach the eradication or reduction of a population can put the job of pest management in a tricky place.

As the Great Lakes Fishery Commission starts assessing its latest control method - altering the genes of sea lamprey - it's again asking these questions.

The genetic control method would include distorting the sex ratio of offspring. The idea would be to skew the gender balance in the population by biasing the offspring to be male, instead of a 50/50 mix. This way, the problem would eventually work itself out on its own. 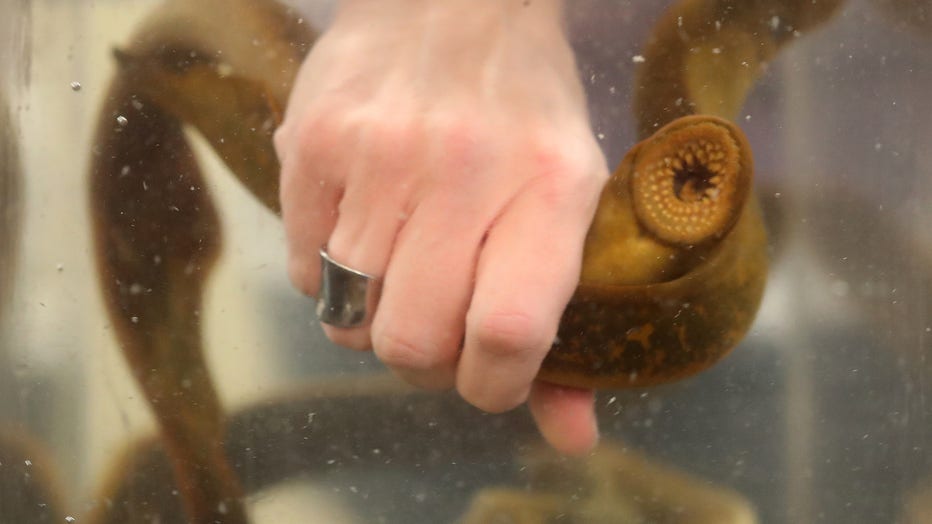 TORONTO, ON- OCTOBER 29 - The mouth of a Sea Lamprey features 150 teeth and a tongue that is cerated. A behind the scenes look at the Royal Ontario Museums Invertebrate Zoology Lab with the bloodthirsty creatures of the original exhibition Bloodsucke

Another promising genetic option is modifying the genome of prey species that would make them better able to survive a lamprey attack.

There are pitfalls with these methods, too. If a genetically modified lamprey were to escape to its native habitat and mate, it could cause a chain reaction on an evolutionary scale that would collapse the population where it's not invasive. Genetic modification might also harm some of the native lamprey in the Great Lakes that don't pose a threat to species here.

"We're at square one, the asking-the-questions-phase about genetic modification," Gaden said. "We still don't know all of the knowns and unknowns."

Part of square one is evaluating whether the public can stomach the control method. Whether scientists can do something doesn't mean the public wants them to do something.

Based on the first paper assessing the general populace, public perception of the genetic modification of lamprey was supportive. But as Gaden emphasized, that's only step one.