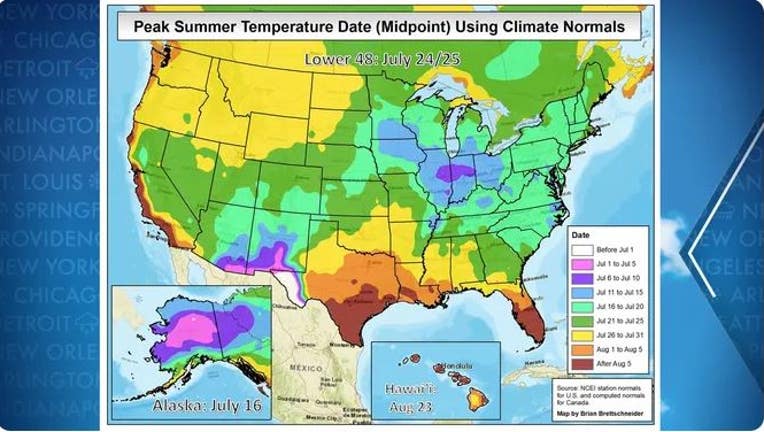 The march toward winter has begun. At least, temperature-wise…

Alaska climatologist Brian Brettschneider has computed the average peak of summer temperatures across the Lower 48 using 1991-2020 climate averages and found the period from July 24-25 is when the nation as a whole is at its hottest.

After much of the nation has been sweltering for the past several weeks, this might be good news, but for some areas, the hottest weather is generally yet to come, and the wait continues.

WHY SUMMER SHOULD ACTUALLY BEGIN ON JUNE 1

For much of Texas and especially central and southern Texas, the peak of the heat doesn't arrive until early August, as is the case in southern Florida. Houston, San Antonio, and Miami don't see their peak of summer until after Aug. 5.

That is also the case along the California coastline, where Santa Ana winds usually bring their hottest temperatures of the year in September and October.

As we head into the hot summer months LiveNOW from FOX talks about keeping kids safe in dangerous temperatures.

WHAT ARE THE SANTA ANA AND DIABLO WINDS?

On the other hand, across parts of the Great Lakes and desert Southwest, summer peaked days to weeks ago.  Parts of the western Texas Panhandle usually see their hottest weather before July even begins!