Polling in Michigan ahead of the election had consistently predicted Biden beating Donald Trump in the Great Lakes State, though as did the polls with Hilary Clinton back in 2016. Trump flipped the state that year and won Michigan by the narrowest margin of any state - fewer than 11,000 votes.

Earlier on Wednesday, President Trump's campaign filed a lawsuit in Michigan to halt counting ballots, citing a lack of access to the counting process. A judge still needs to rule on the lawsuit.

While Michigan’s Secretary of State Jocelyn Benson had said not to expect the presidential results until Friday, Nov. 6 after a record number of Michiganders voted absentee this general election amid the COVID-19 pandemic - she and other election officials grew more confidant they'd have an unofficial tabulation by the end of Wednesday.

Statewide, Secretary of State Jocelyn Benson said she expected voting this general election to exceed 5 million Michiganders, with about 3.5 million voting via absentee amid the pandemic. More than 2.5 million Michiganders voted in the August primary, which was a record-breaking number for that election. Michigan is on track to break a voting record for this election as well. 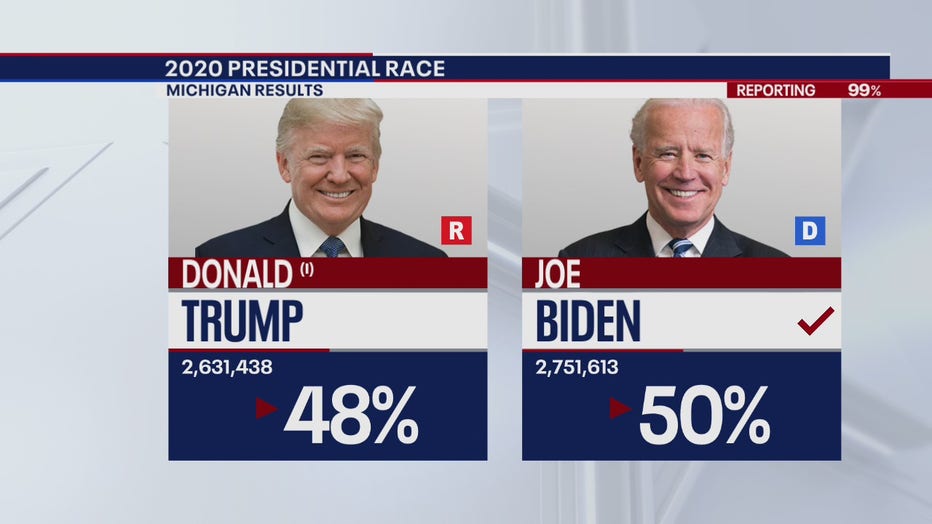 “This is another extraordinary indicator that our democracy is healthy and that people participated in this election and that it will be a reflection of the will of the people,” she said. Detroit, Ann Arbor and Grand Rapids saw the largest in-person registration on Election Day, she said. She also said a majority of these were young voters under the age of 30.

Benson had said counting the 1.6 million absentee ballots in the August primary took about 40 hours and was therefore anticipating about 80 hours of counting for the general election, though more tabulators were added and more workers were hired.

THE VOTES: BIDEN VS. TRUMP

As of Wednesday afternoon, after Michigan was called, Biden is leading Trump in electoral votes with 264 to Trump’s 214. Biden is also already on track to receive the most votes for a presidential candidate in U.S. history, breaking Barack Obama's previous record of 69.4 million votes in 2008.

All eyes are still on Pennsylvania, North Carolina, Georgia and Nevada right now. Nevada's 6 points would put Biden at the needed 270.

As previously mentioned, polling in Michigan ahead of the election had consistently predicted Biden beating Trump in the Great Lakes State. A Real Clear Politics average of polls showed Biden ahead by 7 percentage points in the state on Aug. 22 and then by just 3.2 percentage points as of Sept. 9.

But polling aside, many Democratic leaders were’t necessarily buying the numbers out of concern about history repeating itself, experts say. During the 2016 election, Democrats got sidelined, watching Trump take the state despite every poll indicating the solidity of Michigan’s “blue wall.”

RELATED: Gov. Whitmer believes a Biden win in Michigan is possible even without a strong Detroit vote

In 2016, Hilary Clinton led the polls by three or four points, similar to what Biden averaged leading up to the 2020 election, and Trump declared victory then.

Despite winning by such a thin margin in 2016, David Dulio, a political science professor at Oakland University in Rochester Hills, explained that Trump’s populist “America first” message is what got key votes in a state heavy with industrial and manufacturing jobs.

But this year, leading up to the election voters in Michigan’s Democratic primary ranked health care as the most important issue facing the country, well above climate change, the economy, race relations, foreign policy and other social issues. 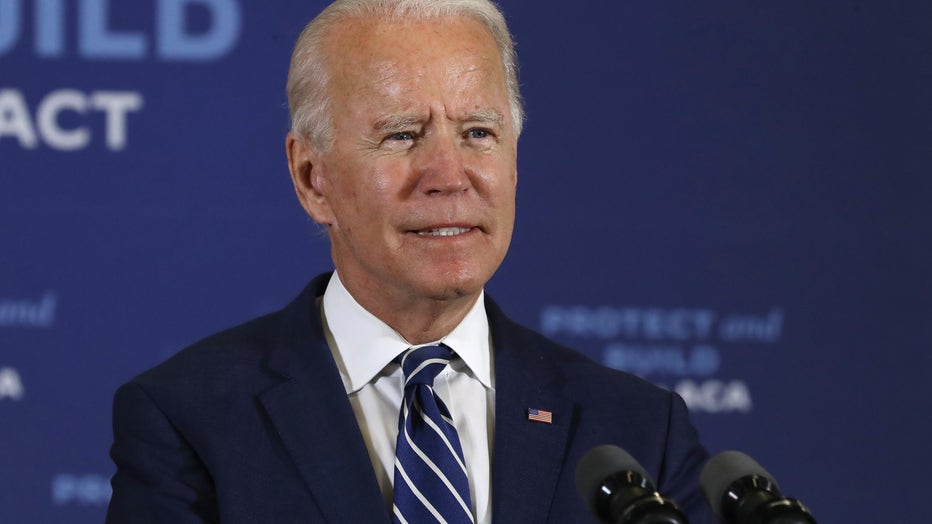 About 4 in 10 Democratic primary voters named health care of great importance. Roughly 2 in 10 had climate change and the economy on their minds, according to a wide-ranging AP VoteCast survey of the Democratic primary electorate in Michigan taken in March.

Voters in Michigan’s Democratic primary were closely divided over whether they wanted a candidate who would bring fundamental change to Washington or one who would restore the political system to how it was before Donald Trump was elected in 2016.

Trump may have fired up voters looking to bring back jobs from China four years ago, but the Associated Press poll during the state’s March primary found that only 2 in 10 of the state’s residents called the economy the top issue. A significant majority described the economic system in the country as unfair — including about a third who said it’s very unfair.

Citing some of the polls his company has done in Michigan, Steve Mitchell, president of Mitchell Research & Communications, a national polling and consulting company said, “If you ask voters what’s more important, coronavirus or jobs and the economy, about 75% of the Democrats are telling you that the most important issue is the coronavirus, about 75% of Republicans are saying the economy and jobs. So there’s a real dichotomy in terms of perception on what’s the most important issue.”

Mitchell added that Trump’s message to Michigan voters was that if he is reelected, he will do more for the auto industry and more for jobs.

Biden, on the other hand, banked on the fact that there won’t be many jobs to go around if the pandemic is not brought under control. He set his sights on convincing voters in the Great Lake State that Trump is responsible for the crisis Americans find themselves in, according to Mitchell.

“This appeals to his base,” Mitchell said. “Gov. Whitmer has been one of the more conservative governors in terms of keeping the state under lockdown for a longer period of time than other states have.”

Mitchell said that in dueling messages, Democrats are pushing for public safety and blaming Trump for thousands of deaths caused by the coronavirus, while Republicans base their pitch on job security and continuing the facilitate the pre-pandemic economic growth.

Mitchell said the winner - which we now unofficially know to be Biden - would all depend on which message Michigan voters actually buy.