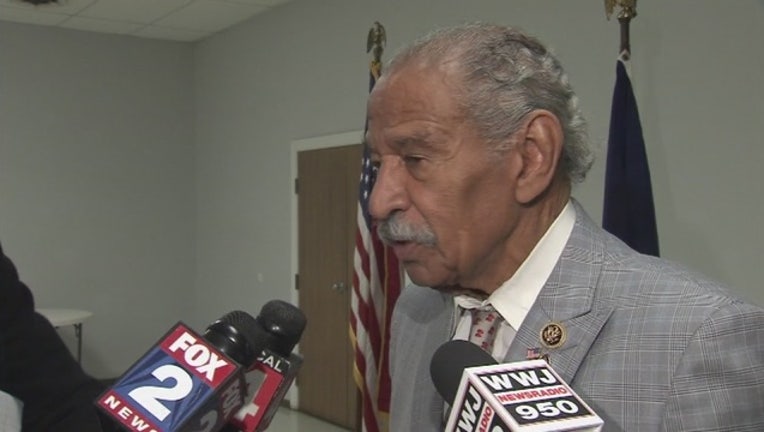 John Conyers, Jr. (D-MI) signed the letter that was sent to the House Judiciary Committee on Tuesday, urging more action than sending flowers and condolences be taken to prevent tragedies like what happened at Pulse from happening again.

The 3-page letter was penned and written in the wake of the shooting at Pulse in Orlando where 49 people were killed. This is the latest mass shooting involving an assault rifle and it comes just a days before the one year anniversary of another mass shooting: the Charleston, South Carolina church shooting.

In the letter, lawmakers ask for the committee to close the loophole that allowed Omar Mateen from purchasing his weapons and ammunition, despite being on a terror watch list two years ago. Mateen was on a terror watch list in 2013 and 2014 but even if he would have been on the list at the time he bought the weapons, that would not have prevented him from doing so.

The letter is addressed to House Judiciary Committee Chairman Bob Goodlatte. Read the entire letter below:

On numerous occasions in the past, after assaults on our people by those who reject our values and seek to break our spirit, we have come together to console each other, hold the attackers accountable, and reduce our vulnerability to future attacks.  Make no mistake about it: our Nation is under attack.  We are under attack by the scourge of gun violence-on our streets and in our homes, on a daily basis.  All too often, these attacks take the form of a mass shooting.  Included in these attacks are hate crimes and incidents of domestic terrorism.  Congress needs to act.  Our Committee needs to act now.

We are nearly upon the one-year anniversary of the killing of nine individuals in a hate crime at the Emanuel African Methodist Episcopal Church in Charleston, South Carolina.  The FBI has told us that the firearms background check system failed in that circumstance because a gun dealer, as allowed by federal law, sold the gun to the shooter five days after the check had been initiated but which had not yet been completed.  In that case, FBI personnel were still in the process of investigating information which later indicated that the purchaser was in fact ineligible to purchase firearms.

Now, the FBI has confirmed that Omar Mateen, the perpetrator in the deadliest shooting in U.S. history on Sunday morning, was on our terror watch list for a period during 2013 and 2014.  However, even if he had been on the watch list at the time he purchased the very firearms he used to kill 49 people and wound 53 others in another horrific hate crime, reportedly within two weeks of the shooting, he would not have been prevented - according to the laws under the jurisdiction of this Committee - from purchasing and possessing those firearms.  One of the firearms he used to slaughter the patrons in the Pulse nightclub was a semi-automatic rifle that, of course, should never have been in his hands.  Whether or not this terrorist was on the watch list, we know that our firearms background check system has a dangerous, gaping hole if it does not include those whose terrorist intentions and connections are serious enough that they are included on the watch list.

Now we are asked to answer questions of how we can allow such appalling crimes to happen when we have known of the gaps in our firearms laws - specifically deadly deficiencies in our background check system.   It is imperative that the Committee examine these issues.

In the wake of the Oklahoma City bombing in 1995, the Committee conducted hearings and moved legislation which ultimately passed into law.[1]  Subsequent to the Columbine mass shootings in 1999, the Committee again conducted hearings and moved legislation to the House floor.[2]  In the wake of the shootings at Virginia Tech, the Committee shepherded the NICS Improvement Amendments Act of 2007 to the floor, which was signed into law by President George W. Bush.[3]

However, after numerous additional mass shootings including those in Tucson, Aurora, Oak Creek, Newtown, and San Bernardino, the Committee has conducted no hearings on these issues.  Of course, we need to consider not only mass shootings, but the daily toll of gun violence that afflicts all of our communities.  In one year, on average, over 108,000 Americans are shot in murders, assaults, suicides and suicide attempts, accidents, and police actions.  Approximately 32,500 of these individuals die.  Nearly 12,000 are murdered-more than 31 Americans every day.[4]  This is unacceptable and we must do more to examine the issue of gun violence in order to develop solutions to make us all safer.

Most of us are on record supporting a number of bills designed to reduce gun violence because it is clear that our citizens are unnecessarily exposed to a greater risk of such incidents due to the inadequacy of our laws.  While we understand that there have been differing views on the issue across the broader membership of the Committee, we urge the Committee to take action as soon as possible to eliminate the private sale loophole to our background check process, to prohibit gun dealers from transferring firearms to someone whose check has not been completed, and to prohibit the sale of guns to and possessions of guns by individuals on the terror watch list, with misdemeanor hate crimes convictions, and convicted stalkers and dating partner abusers.  We should also reinstate a ban on semi-automatic assault weapons, or at the very least a ban on high-capacity ammunition magazines that allow the firing of numerous rounds without requiring a shooter to reload.

Bills reflecting each of these proposals are ready for our immediate consideration.  Too many of those who elect us to represent them are needlessly placed in danger of having their lives ended or devastatingly impacted by gun violence.  Therefore, it is up to us to do what we can in Congress to reduce the likelihood that such incidents will continue in our churches, schools, movie theaters, nightclubs - and in our homes and on our streets.  We must do more than offer condolences, send flowers, and observe moments of silence.  We must take action now.

We look forward to discussing these matters with you at your earliest convenience.