Only 5 gallons out of a 20,000 diesel tank leaked into the Detroit River. The EPA says that's because of how seriously the city took the problem.

TRENTON, Mich. (FOX 2) - Clean-up of a diesel spill in the Detroit River continues this week in Trenton but the city's quick action is getting a lot of credit for stopping what could have been a catastrophic spill.

On Monday, a 20,000 abandoned diesel tank underground on the property of the abandoned Riverside osteopathic hospital started to leak. But only 5 gallons of the red dye diesel fuel escaped into the Detroit River.

"The oil got into the stormwater from the underground storage tank and flowed out to the pipe that's under the water here," EPA site coordinator Brian Kelly said.

Plant life contaminated by the fuel has already been taken care of. By in large, there was no threat to wildlife, the water, or the river itself. But it could have been much bigger.

In 2002, the Riverside Osteopathic Hospital closed.  There were two underground tanks, each containing 15K gallons of diesel fuel, used for the hospital's backup generator.

Kelly thinks someone simply forgot it was there.

"I think it was just neglected 15,000 gallons of diesel left inside," he said.

When a resident saw a red sheen in the water, authorities were called. The diesel fuel is dyed red because it's diesel but is not intended for vehicles.

When the EPA came out, they found the underground tank, plugged the storm sewer, emptied out the remaining diesel, and is now storing it in two containers. They're in the process of cleaning between the tank and the sewer.

Kelly credits the city's rapid action for keeping the leak to only 5 gallons.

"I think it was because of the quick response of the city of Trenton, notifying EPA and EGLE, and then working with the property owner to hire these contractors to clean it up," he said.

The estimated cleanup cost is about $250,000. Kelley says that the hospital is set to be torn down by the end of the year which includes removing those tanks permanently.

The job isn't done. Kelly said they still have to figure out where the leak started.

"That is something that we are looking at because we can't call this done if we think that more oil could head into the Detroit River," he said. 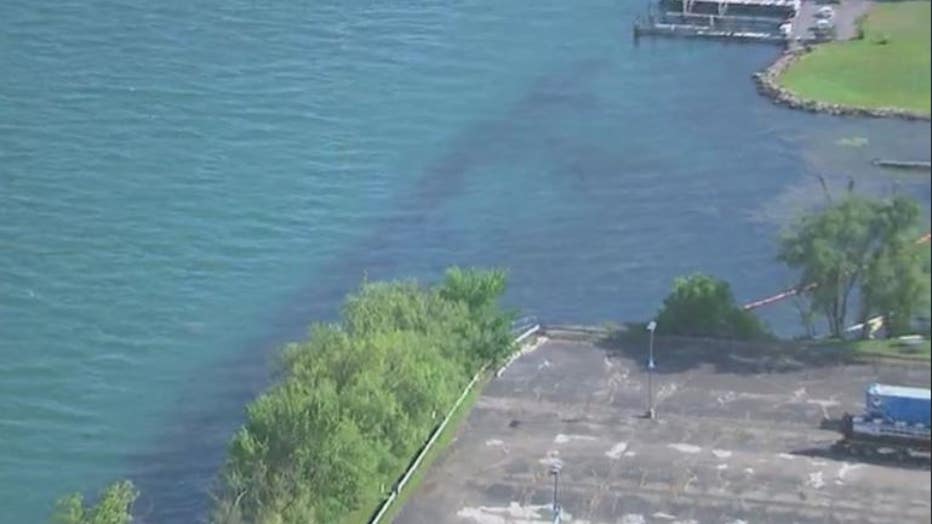