DETROIT - You’d get a sense that Rhonda Theus was speaking for more than just herself while standing in the middle of her new garden. She may have been the only one talking that crisp October evening, but her words channeled a deeper meaning - giving voice to decades of frustration from people just like her.

“A lot of the time, people in our neighborhood are waiting for the cavalry to come,” she said. “Really, you know, the cavalry isn’t coming. We are the cavalry.”

But matching that frustration was a tone of hope - the kind that only reveals itself when backed by evidence it is okay to hope. It wasn’t difficult to locate where that evidence was; it literally surrounded her.

“Us as community members and the city, we have the power and know-how to make incredible change in our neighborhood,” she continued.

Theus is standing on 4118 Lemay Street, the site of three vacant parcels of land that were formerly unused. Planted in its unproductive stead is the Canfield-Lemay Flower Garden - a community garden whose design was informed by the perennial propagator lot plan. It’s one of dozens of different templates to choose out of the Detroit Future City (DFC) lot guide - a sort of bible to community members looking to catalyze change in their own neighborhoods.

Theus’s garden was the fourth stop on a DFC-organized field trip intended to celebrate the group’s Working with Lots program. A sort-of greatest hits tour that featured an array of community projects undertaken by Detroit residents to revitalize and beautify the city’s empty land.

“DFC found an opportunity to provide more resources and solutions to people,” said Pier Davis, a land use and sustainability program manager for DFC. “Detroit has so much vacant land, we’re just scratching the surface.”

She’s not lying either - Detroit has a lot of vacant land. Since the population exodus that’s taken place over decades in Detroit, more than 24 square miles of vacant land has opened up and is left unused and unkempt. Four years ago, DFC sought to find a purpose for that land by providing grant money to community groups and neighborhoods hoping to find a better use for that land.

Since then, its Working with Lots Program has yielded more than $320,000 in awarded money that’s funded the transformation of more than 50 plots of vacant land. While it’s difficult to measure what kind of impact this experiment in green infrastructure philanthropy will have, the anecdotal evidence is promising.

“As a formerly blighted piece of land, I felt like it wasn’t enough just to maintain it by cutting it,” said Daniel A. Washington, founder of NW Goldberg Cares. “I wanted it to be usable space in the neighborhood.”

Washington’s Holland Maze was built with the aid of $9,000 in awarded funds during the 2019 round. A legacy resident of the Goldberg neighborhood, the young entrepreneur had purchased the land years ago with the intention of revitalizing the green space. If it was done right, it’s effects would spread beyond the bordering sidewalk. 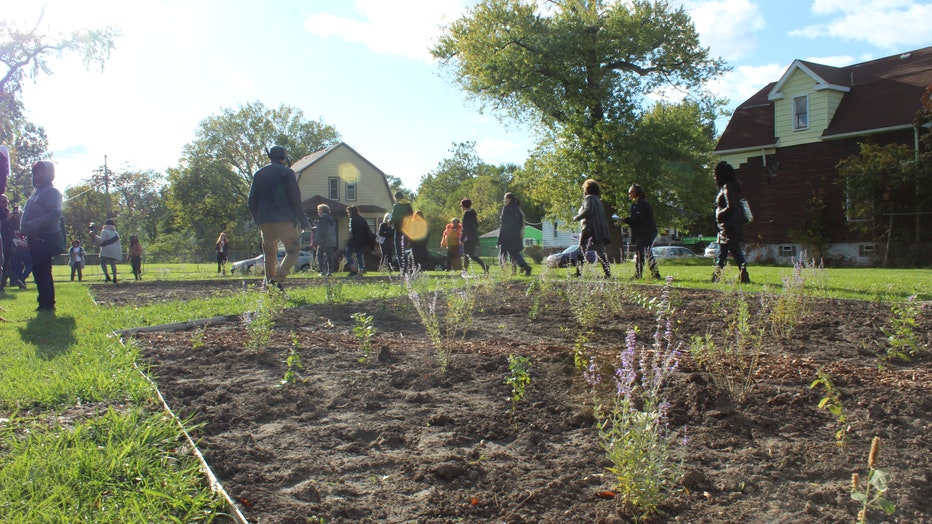 “This has been a very dis-invested neighborhood,” he said. “It’s been plagued with crime, gang violence and just a lack of resources. So my desire as a born-and-raised resident of the neighborhood was to improve the neighborhood.”

That sentiment wasn’t isolated to just Washington or Theus however.

Andrew Kemp, the president of Arboretum Detroit farmed a tree nursery that would provide trees for the entire community to grow. Down the road, Sarah Pizzimenti created a sanctuary out of blight that offers residents a way to more intimately connect with their environment. Carrie Morris is in the middle of installing an outdoor amphitheater that will span across 12 vacant lots - in an effort to bolster performance art and artistic exploration in the city.

“It’s been a really great program for Detroit Future City to build relationships within the community,” said Sarah Hayosh, director of land use and sustainability at DFC. “It’s really expanded the number of people in Detroit starting to think about the possibilities, the really positive impacts in the communities where lot designs have been implemented.”

Naturally, with most experiments, the variables are tweaked and the hypotheses are amended to fit the goal. In its first year, DFC handed out $65,000 in grant money that was awarded in small increments. In its fourth year, $94,000 was offered across fewer but more valuable grants. 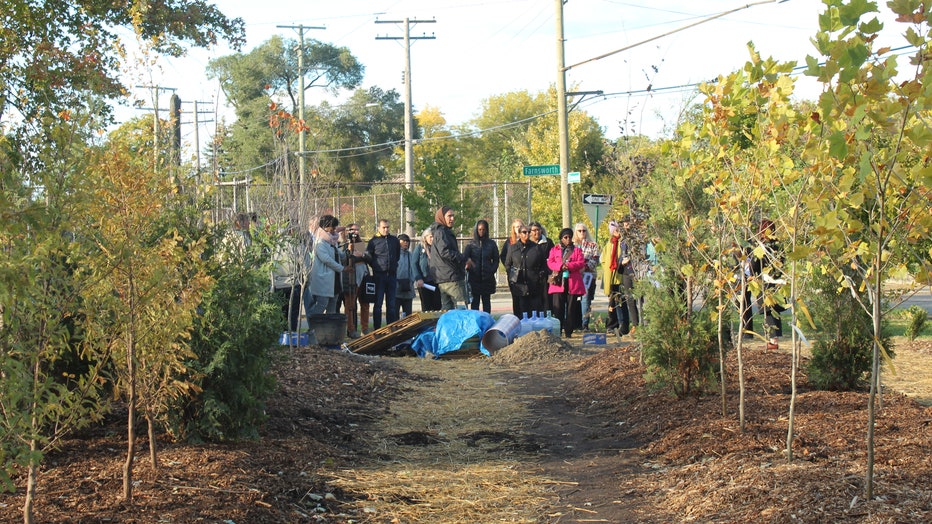 The projects have become more complex as the grants have become more competitive. More money has been allocated toward maintaining green space, rather than just initially fixing it. They host best practice sessions for all grantees. Since the Detroit Water & Sewerage Department revised its property drainage charge and increased the fee for mitigating stormwater, DFC has acted to help businesses, nonprofits and faith-based organizations to bring down those charges.

There’s reason to believe this program will continue to expand, too. There’s no limit to the breadth of benefits that green space - particularly productive green space - can offer to a neighborhood. It looks nice and leads to cleaner air in the neighborhood. It soaks up potential floodwater that could damage home foundations. Green space is tied to declines in crime rates and even lower depression. One study even shows that people’s heart rates drop when they walk by green space. 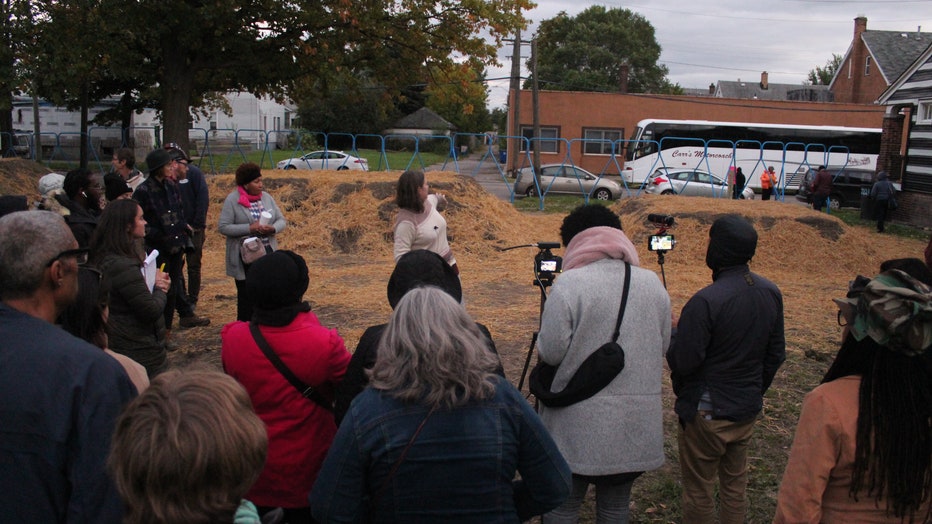 But not every impact can be measured. It’s unclear how many lots have been designed with the help of the guide book or how many kids have taken a vested interest in their new neighborhood gardens. For grantees who revitalized green space, how their knowledge is used elsewhere is up to them.

However, one of the final measurements that DFC did make for the 2019 season was an unofficial headcount made by Shari Williams on the bus tour.

“I just want to acknowledge that I think this might be the fullest I've seen this bus,” said the community partnerships manager. “It's amazing. So can everybody just give yourselves a round of applause?” 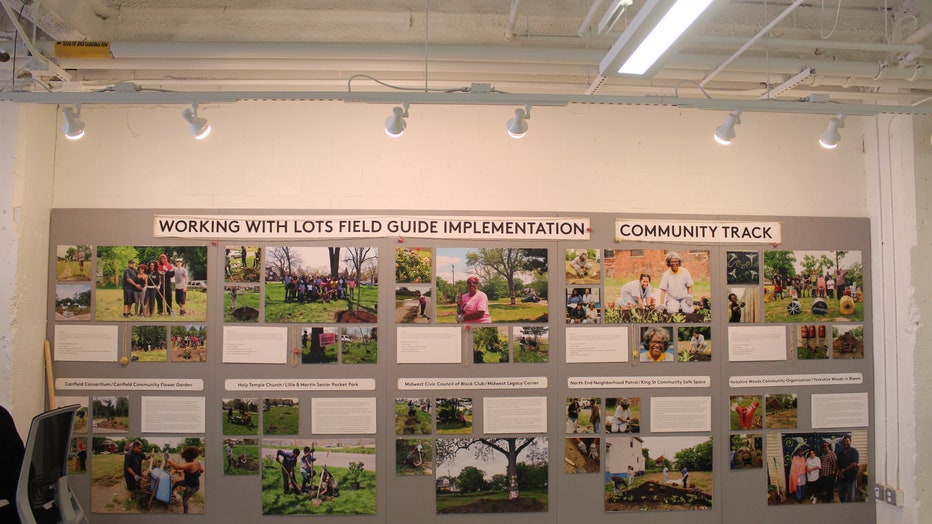