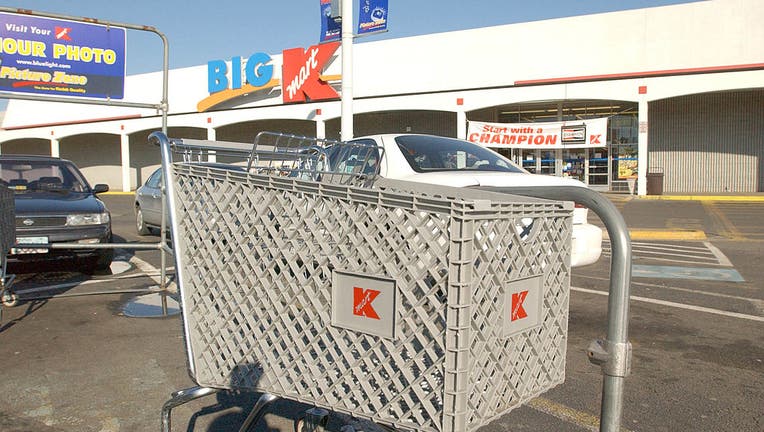 Shopping cart outside a K-Mart store, the giant retailer which just announced that they had entered into Chapter 11 bankruptcy protection. (Photo by Greg Mathieson/Mai/Getty Images)

AVENEL, N.J. (AP) -  The familiar sights and sounds are still there: the scuffed and faded floor tiles, the relentless beige-on-beige color scheme, the toddlers’ clothes and refrigerators and pretty much everything in between.

There’s even a canned recording that begins, "Attention, Kmart shoppers" — except it’s to remind folks about COVID-19 precautions, not to alert them to a flash sale over in ladies’ lingerie like days of old.

Many of the shelves are bare, though, at the Kmart in Avenel, New Jersey, picked over by bargain hunters as the store prepares to close its doors for good April 16.

Once it shutters, the number of Kmarts in the U.S. – once well over 2,000 – will be down to three last holdouts, according to multiple reports, in a retail world now dominated by Walmart, Target and Amazon.

The demise of the the store in the middle-class suburb, 15 miles (24 kilometers) south of New York City, is the tale of the death of the discount department store writ small.

"You’re always thinking about it because stores are closing all over, but it’s still sad," said cashier Michelle Yavorsky, who said she has worked at the Avenel store for 2 ½ years. "I’ll miss the place. A lot of people shopped here."

In its heyday, Kmart sold product lines endorsed by celebrities Martha Stewart and Jaclyn Smith, sponsored NASCAR auto races and was mentioned in movies including "Rain Man" and "Beetlejuice." It was name-dropped in songs by artists from Eminem to the Beastie Boys to Hall & Oates; in 2003, Eminem bought a 29-room, suburban Detroit mansion once owned by former Kmart chairman Chuck Conaway.

The chain cemented a place in American culture with its Blue Light Specials, a flashing blue orb affixed to a pole that would beckon shoppers to a flash sale in progress. Part of its success was due to its early adoption of layaway programs, which allowed customers who lacked credit to reserve items and pay for them in installments. 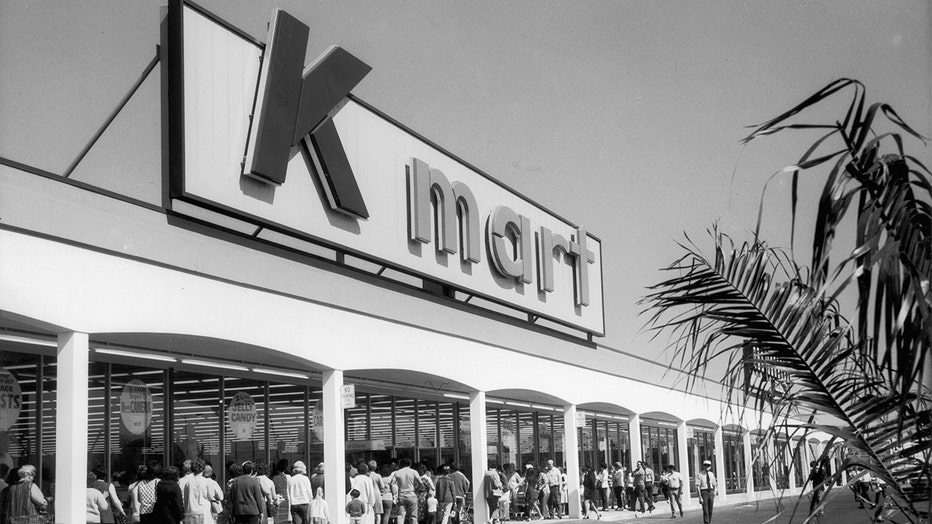 circa 1962: A huge line of people with shopping carts wait to enter the Kmart shopping center. (Photo by American Stock/Getty Images)

The very first Kmart store opened in Garden City in 1962. That store closed in 2017, along with other locations across the state and country.

For a time, Kmart had a little bit of everything: You could shop for your kids’ back-to-school supplies, get your car tuned up and grab a meal without leaving the premises.

"Kmart was part of America," said Michael Lisicky, a Baltimore-based author who has written several books on U.S. retail history. "Everybody went to Kmart, whether you liked it or not. They had everything. You had toys. You had sporting goods. You had candy. You had stationery. It was something for everybody. This was almost as much of a social visit as it was a shopping visit. You could spend hours here. And these just dotted the American landscape over the years."

Kmart’s decline has been slow but steady, brought about by years of falling sales, changes in shopping habits and the looming shadow of Walmart, which coincidentally began its life within months of Kmart’s founding in 1962.

Struggling to compete with Walmart’s low prices and Target’s trendier offerings, Kmart filed for Chapter 11 bankruptcy protection in early 2002 — becoming the largest U.S. retailer to take that step — and announced it would close more than 250 stores.

A few years later, hedge fund executive Edward Lampert combined Sears and Kmart and pledged to return them to their former greatness, but the recession and the rising dominance of Amazon contributed in derailing those goals. Sears filed for Chapter 11 in 2018 and currently has a handful of stores left in the U.S. where it once had thousands.

It didn’t have to end this way, according to Mark Cohen, director of retail studies at Columbia University in New York and former CEO of Sears Canada. Trying to compete with Walmart on price was a foolish strategy, he said, and Lampert was criticized for not having a retail background and appearing more interested in stripping off the assets of the two chains for their cash value.

"It’s a study in greed, avarice and incompetence," Cohen said. "Sears should have never gone away; Kmart was in worse shape, but not fatally so. And now they’re both gone.

"Retailers fall by the wayside sometimes because they’re selling things people don’t want to buy," he continued. "In the case of Kmart, everything they used to sell, people are buying but they’re buying it from Walmart and Target."

Transformco, which owns Kmart and Sears, did not respond to an email seeking comment and a phone number listed for the company was not taking messages.

Nationwide, some former Kmarts remain vacant while others have been replaced by other big-box stores, fitness centers, self-storage facilities, even churches. One former site in Colorado Springs, Colorado, is now a popular dine-in movie theater.

Employees at the Kmart in Avenel found out last month that the store would close.

Unlike 20 years ago, when news of impending Kmart closures around the country prompted an outpouring of support from loyal shoppers and a Detroit radio station even mounted a campaign to try and save a local store, the closing of the Avenel location was met mostly with an air of resignation.

"It’s maybe a little nostalgic because I’ve lived my whole life in this area, but it’s just another retail store closing," said Jim Schaber, a resident of nearby Iselin who said his brother worked in the shoe department at Kmart for years. "It’s just another sign of people doing online shopping and not going out to the retail stores."

The closing packed a little more of an emotional punch for Mike Jerdonek, a truck driver who recalled shopping at Kmart in Brooklyn and Queens in his younger days.

"It’s like history passing right in front of our eyes," he said as he sat in his car outside the Avenel store. "When I was younger I didn’t have any money, so it was a good place to shop because the prices were cheap. And to see it gone right now, it’s kind of sad."