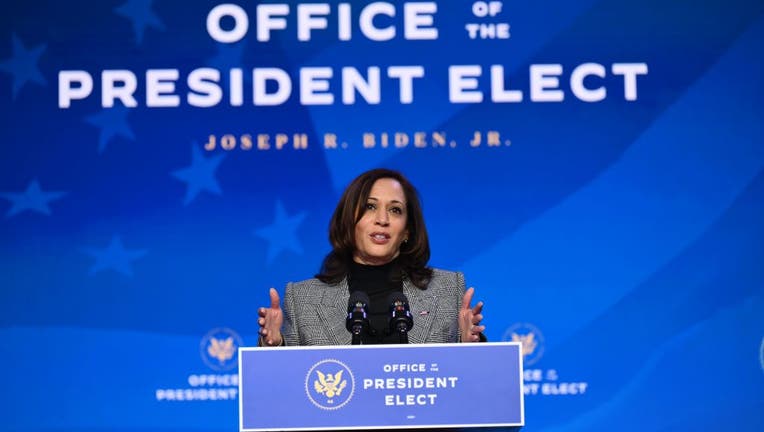 US Vice President-elect Kamala Harris speaks after US President-elect Joe Biden nominated their science team on January 16, 2021, at The Queen theater in Wilmington, Delaware. - Biden is nominating Francis Collins to continue as Director of the Natio

WASHINGTON - Kamala Harris will make history on Wednesday when she becomes the nation’s first female vice president — and the first Black woman and the first woman of South Asian descent to hold that office. But that’s only where her boundary-breaking role begins.

With the confluence of crises confronting Joe Biden's administration — and an evenly divided Senate in which she would deliver the tie-breaking vote — Harris is shaping up to be a central player in addressing everything from the coronavirus pandemic to criminal justice reform.

Symone Sanders, Harris' chief spokeswoman, said that while the vice president-elect's portfolio hasn't been fully defined yet, she has a hand in all aspects of Biden's agenda.

"There are pieces that Biden may specifically ask her to champion, but outside of that she is at the table for everything, involved in everything, and giving input and feedback and being a supportive partner to him on all pieces," she said.

People working closely with Harris on the transition resist the idea of siloing her into any specific issue early on, because the sheer number of challenges the Biden administration faces means it will be "all hands on deck" during their early months. They say she'll be involved in all four of the major priorities they’ve set out: turning around the economy, tackling COVID-19, and addressing climate change and racial justice.

"She has a voice in all of those. She has an opinion in all those areas. And it will probably get to a point where she is concentrating on some of the areas more specifically," Sanders said. "But right now, I think what we’re faced with in this country is so big, it’s all hands on deck."

Harris has been closely involved with all of Biden’s biggest decisions since winning the election in November, joining him for every one of his key meetings focused on Cabinet picks, the COVID-19 relief bill, security issues and more. The two talk over the phone nearly every day, and she travels to Delaware sometimes multiple times a week for transition events and meetings.

Those involved in the transition say both have taken seriously Biden’s insistence that he wants Harris to be the "last voice in the room" on key decisions. Biden is known to turn to Harris first during meetings to ask for her opinion or perspective on the matter at hand.

Biden and Harris knew each other prior to the 2020 presidential campaign in part through Harris’ friendship with Biden’s deceased son, Beau. But they never worked closely together.

Since joining the ticket, and particularly since the election, Harris has made efforts to deepen their relationship and is in frequent contact with the president-elect, people close to Harris say. That personal relationship, according to presidential historian Joel Goldstein, will be key to their success as working partners.

Goldstein pointed to Biden and President Barack Obama’s relationship as a potential model for the incoming team.

Biden and Obama were from similarly different backgrounds and generations and also entered the White House with a relatively fresh working relationship. But their relationship and mutual understanding grew throughout the presidency, and Obama trusted Biden with some of his administration’s biggest endeavors, like the implementation of the 2009 Recovery Act and the troop withdrawal from Iraq.

Harris is said to be looking at Biden’s vice presidency as a guide for her own.

Early in the vice presidential vetting process, her potential presidential ambitions gave some Biden allies pause. But since her selection, Harris has proven a loyal partner to Biden, rarely if ever contradicting him publicly.

Still, California Rep. Barbara Lee, who was the first Congressional Black Caucus member to endorse in the primary when she backed Harris, said the vice president-elect isn’t afraid to speak her mind.

Who is Kamala Harris? Answers to your questions about the vice president-elect

"She’s no shrinking violet," Lee said. "If she believes that one decision should be made versus another she’s gonna weigh in and give her thoughts and opinions."

Biden has a personal affection for the work of diplomacy and deep relationships with global leaders that Harris can't match. But aides say she'll be deeply involved in the administration's diplomatic priorities simply because of the sheer amount of issues that will take up Biden's time. She may also be given a particular aspect of the administration's coronavirus response to oversee.

One of her main priorities early on is certain to be the passage of the $1.9 trillion coronavirus relief bill that Biden announced Thursday. Those working with Harris on the transition say that while Biden will be intimately involved with ushering the package through the Senate because of his longstanding relationships with longer-serving lawmakers, Harris knows the newer members and can help build fresh relationships in Congress.

The first few months of the Biden administration will be focused on COVID-19 and the economy. But Harris is certain to face scrutiny — and pressure — from advocates to ensure the perspectives of Black and brown Americans are reflected in those policies and the Biden White House's priorities.

Leah Daughtry, a former chief of staff at the Democratic National Committee, said Harris will make a difference simply by being in the room.

"The fact that Kamala Harris is a Black woman, is a woman of Indian ancestry, is a woman, automatically makes her different from every other vice president this country has ever seen," she said. "That combination of experiences brings a set of values and lived experiences into a room where they have not previously existed. And that can only be good for this American democracy."

But as South Carolina Rep. Jim Clyburn put it, "There will be a lot of weight on those shoulders."

"Those of us who come to these positions, we come to them knowing full well that we have a burden to make sure that we do it in such a way, that there will be people coming behind us," he said.

Clyburn also acknowledged that Harris could also be a flashpoint for controversy among the portion of President Donald Trump’s followers who are motivated by racial animus, which Clyburn said contributed to the deadly attack on the U.S. Capitol.

"They’re still holding on to a lot of animus about Barack Obama, and they’re gonna transfer it to her, just like they transferred it to others here in this building," Clyburn said. "And they’re never gonna get beyond that."

But Harris’ allies say as a child of civil rights activists, and a Black woman who’s spent her life confronting and trying to address racism and inequality, navigating those pressures as vice president will come as second nature for her.

"Kamala Harris didn’t just fall out of the Harvard Law School like Josh Hawley or Ted Cruz or somebody like that," said Bakari Sellers, referencing two Republican senators who objected to the congressional certification of Biden’s win. (Hawley graduated from Yale Law School.)

Sellers, a former South Carolina state lawmaker and an early Harris endorser, likened her to other civil rights trailblazers.

"She comes from the same lineage as Fannie Lou Hamer and Shirley Chisholm and Ella Baker," he said. "I mean, she’s built for this."

Sign up for emails from FOX 29, including our daily Good Day Digest newsletter