LANSING, Mich. (FOX 2) - It was just after 1 a.m. on April 11th when a clearly agitated Anthony Hulan is led into a Lansing jail cell by four people.

“Just leave him alone in the cell,” said attorney Jennifer Damico. “It’s an observation cell that’s what it’s there for.”

It was just after 1 a.m. on April 11th when a clearly agitated Anthony Hulan is led into a Lansing jail cell by four people.

He is there for good reason, the attorney representing Hulan does not dispute that. He had been arrested for domestic assault and high on meth and ecstasy.

“He got in a fight with his roommate,” said Damico. “He used meth the night before and he told them that. He said it was a bad reaction and something was mixed with it.”

He was brought to his cell after eight hours at the hospital.  According to the attorney for Hulan’s family, the corrections officers are trying to put further restraints on his hands.

And in this wrongful death lawsuit, it's alleged they went way too far to put them on.

One officer is seen kneeling on his upper back.

“They are on him for five minutes and 23 seconds,” Damico said.

That was when he stopped breathing.

“You do not put him on his stomach and exert pressure on his shoulders, chest, and legs while trying to put a waist belt on him,” Damico said. “It is in their policies and procedures.”

They are policies that the lawyer says were revised 25 years ago after another wrongful death suit occurred in that very cell.

In this case, the officers start CPR.

“They do chest compressions but no rescue breathing at all,” the family’s attorney said.

Another eight minutes passed before EMS arrived, but Hulan would never be revived. He was pronounced dead at the hospital. The medical examiner’s report would lead to the lawsuit just now filed.

“The cause of death was positional asphyxia like George Floyd and the manner of death was homicide,” Damico said. 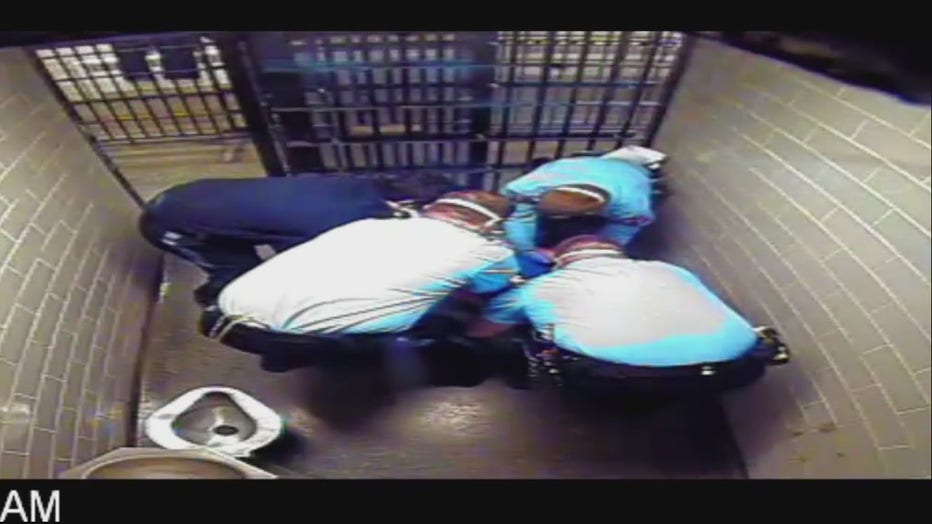 The attorney represented Hulan’s sister and his parents in their 80s says last time this happened, in 1996  a jury awarded Edward Swan’s family $13 million.

Damico says she plans to take this case to a jury.

FOX 2: “Are you hoping for a similar judgment in this case?

FOX 2 reached out to Lansing’s city attorney for comment Monday evening but have yet to hear back.