An elderly driver t-boned a police car Thursday at Levan and Five Mile.

LIVONIA, Mich. (FOX 2) - An officer was injured when a police cruiser was hit by an SUV at a Livonia intersection after witnesses say the other driver ran a red light.

The crash happened at the intersection of Levan and Five Mile Thursday afternoon.

"I was going to the doctor’s office so I was looking for it, I guess I ran into a police car I didn’t even know it," said Norman

Two Livonia scout cars were responding to reports of a person who was intoxicated in the roadway at Roycroft and Farmington, but before officers could make it there the crash took place.

The police cruiser was T-boned while the front of Kormankosinski's white SUV suffered front-end damage..

Police tell FOX 2 that as the scout cars were going eastbound on Five Mile and making their way through the intersection to approach Levan, the cruiser had the green light and the 70-year-old Westland man disregarded the red light and hit the police vehicle.

"I thought he cut me off, but I guess he said he had the green light, I had the red," he said.

Police say Kormankosinski was not injured and refused medical treatment

As for the injured officer, police say he’s a 13-year veteran with the department, and he’s being treated at a local hospital for minor injuries.

"I don’t know where he’s at, I would say something to him - 'I’m sorry,'" said Kormankosinski who added he felt "shaky" after the crash.

Police say the driver was issued a citation for running a signal and causing a crash.

"I'm just sorry this had to happen you know," he said. 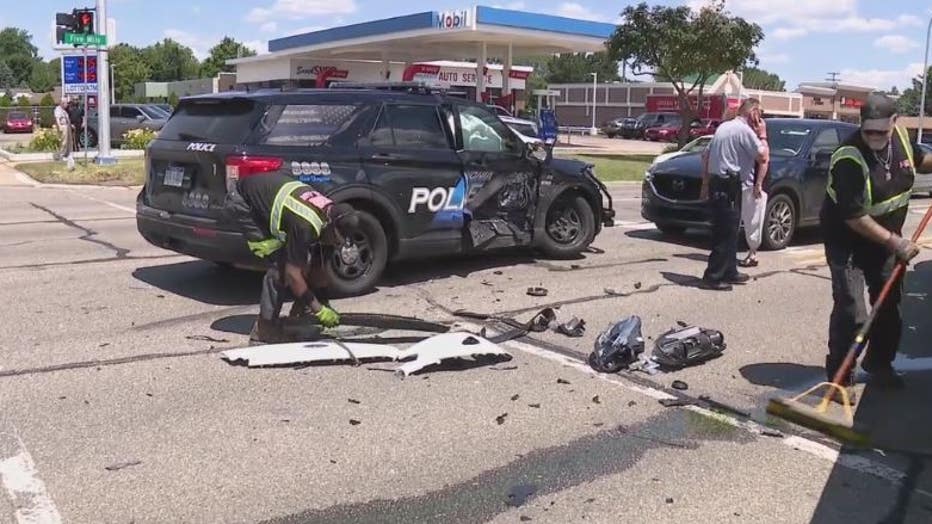