FOX 2 - A prominent tattoo artist from Livonia is under arrest and facing sex crimes charges.

The Wayne County Prosecutor's Office says Plymouth police arrested 26-year-old Alex Boyko on a warrant for allegedly having inappropriate sexual contact with a Redford woman in 2015.

Boyko, who is said to have worked in tattoo shops in metro Detroit and around the country, was the subject of a story on jezebel.com which claimed more than 200 women accused the artist of wrongdoing.

One woman said, "He tried to put his hand down my pants and grab my vagina, all while I was on his bench."

"There has been whisperings of this for a long time," said Cheryl Tash.

Tash is a tattoo artist from Eternal Tattoos in Livonia and says she's heard numerous stories about artists' inappropriate behavior. "I've had women tell me they'll get their arm tattooed - and someone not here, someone will make them remove all their clothes," she said. "I've heard women say like with Alex Boyko, where he kept putting his business in their hands and stuff like that.

"There's a difference between accidental bumping and something that repeatedly keeps happening.

Tash says being asked to remove excess clothing, inappropriate touching and artists asking for nude pictures leading up to a tattoo session should be seen as red flags. 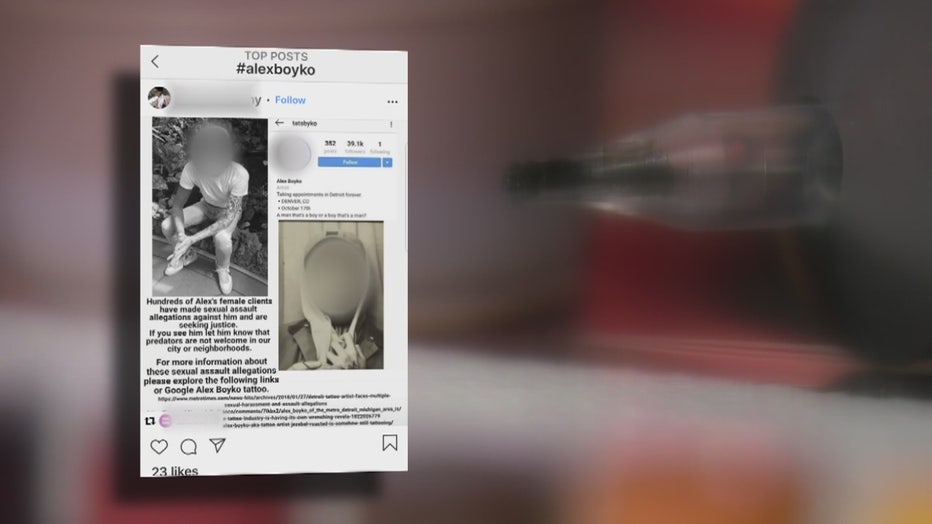 And while there are horror stories about artists crossing the line, Tash says they are in the minority and not a good reflection of tattoo artists at large.

Right now details about the alleged actions that has Boyko in police custody are unclear.

"The biggest thing I can stress as a client is speak up," Tash said. "If you don't feel comfortable, say something."

The artist in question could be arraigned sometime Thursday. He's facing three counts of criminal sexual conduct in the fourth degree.

All of them misdemeanors. each carrying a maximum penalty of two years behind bars.