For those who patronized the longtime New Center Area business, the pain runs deep as the fire destroyed their safe haven - and it happened during Pride Month.

DETROIT (FOX 2) - When the owner of a popular LGBTQ Detroit bar and lounge saw fire shooting from his business and firefighters everywhere along Woodward Avenue - his heart sank.

Nearly 100 Detroit Firefighters worked to put the fire out at The Woodward Cocktail Bar in the New Center area. Thankfully, there were no reported injuries.

"I ran down here thinking it was something small," said Jeff Hall. "It’s devastating for me because this bar is history, it has been here 75 years serving the LGBTQ community."

"It went to a third alarm,  the building collapsed a little bit in the back," said James Harris, Detroit Fire Department. "We went into defensive mode, which means we weren’t able to go in. There’s no one in the building at this time, no one injured."

But for those who patronized this popular space, the pain runs deep as the fire destroyed their safe haven - and it happened during Pride Month.

"It was a staple everyone was always welcomed from different walks of life," said patron Charles Craig.

"People in our community as far as the LGBTQ+  this is somewhere you could go and not have to be judged," said James Fantroy, cook, and bartender. "This was somewhere to go if you didn't have anywhere to go at home, you could come here and hang out all day and just be here safe. If you were hungry, I would make you a burger."

Some have speculated that renovations at the lounge may have something to do with the fire, but the owner says it’s not the cause of the blaze.

"Yes we had replaced the floor in there recently, and did some painting and drywall repair - things of that nature," Hall said. "But again, there’s no cooking, there's nothing in there that would have contributed to this."

"We’re going to do an investigation after we extinguish the fire, and we will have some facts then," Harris said.

"The blessing here is that the building was vacant," Hall said.

The owner is also working to determine what the next steps for his business will be.

"At this point, I’m just hopeful," Hall said. "I’m just thinking of how I can restore it or rebuild it, or even if it’s not in this location, to continue the legacy of it." 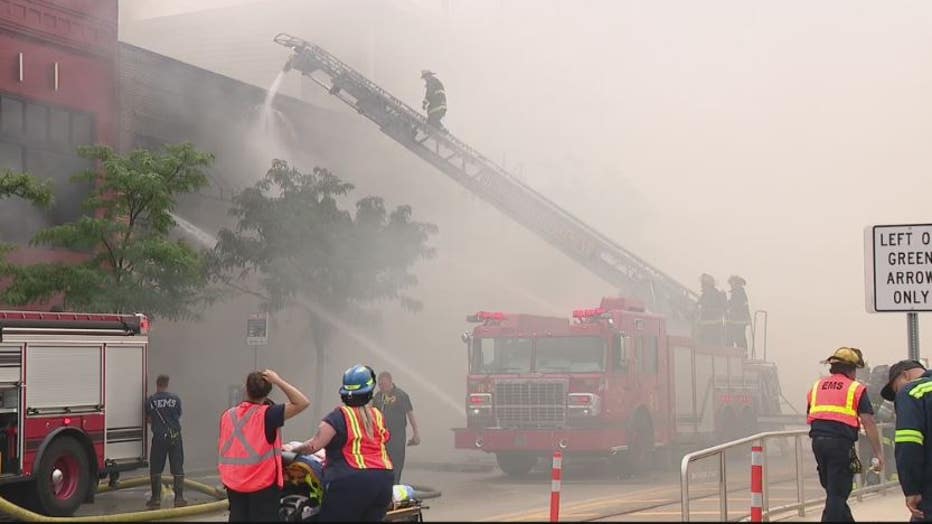