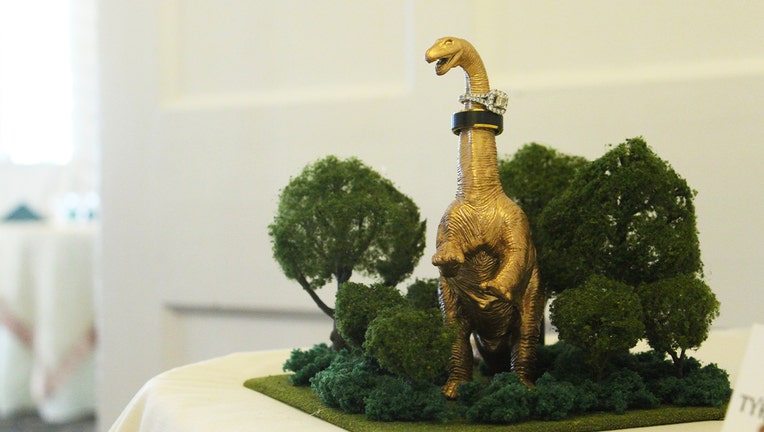 ST. CLAIR SHORES, Mich. - The tables were labeled by every dinosaur species you could think of. The official drink of the night was DINO DNA. On the table where gifts were placed, a large golden egg with a slit at the top sat waiting for thank you cards to be inserted. Even the lettering around the venue used the Jurassic Park typeface.

Literally, the only thing missing from this dinosaur-themed wedding was John Williams composing the music.

On Friday, Oct. 25, Hali Aleese McFadden and Sean James Lenney got married while channeling that inner-youth so many of us have lost. They cemented their undying commitment to each other while surrounded by T-Rex heads, bronze dinosaur figurines, and an almost limitless supply of Jurassic Park references. 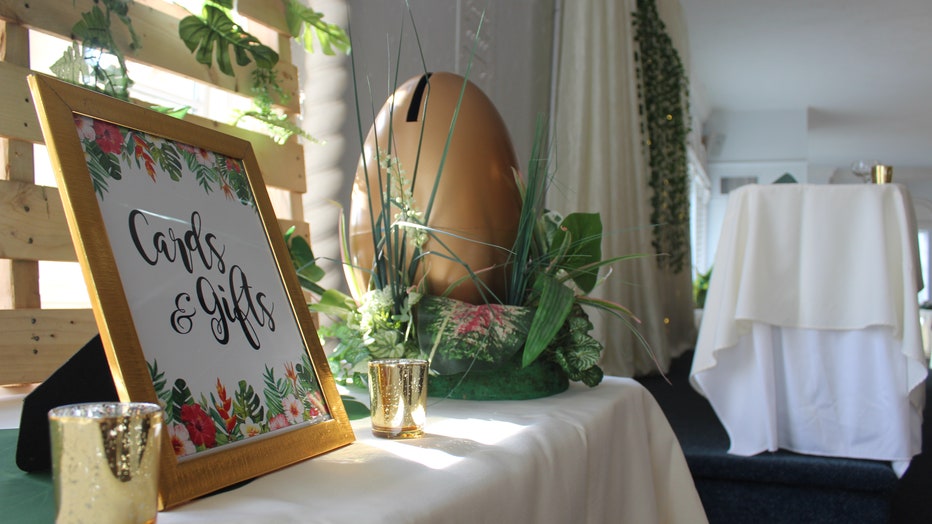 “I literally Instagram-messaged Chris Pratt to come to this. You know, one of those ‘just in case you’re in Michigan this weekend, this is going on by the way’ messages,” said Hali.

“I think it’s supposed to be geared more toward kids, but we don’t care. We’re going,” said Sean.

You could be forgiven for predicting these two first met wearing inflatable T-Rex costumes - although both wore the suits for the engagement photos. Really. 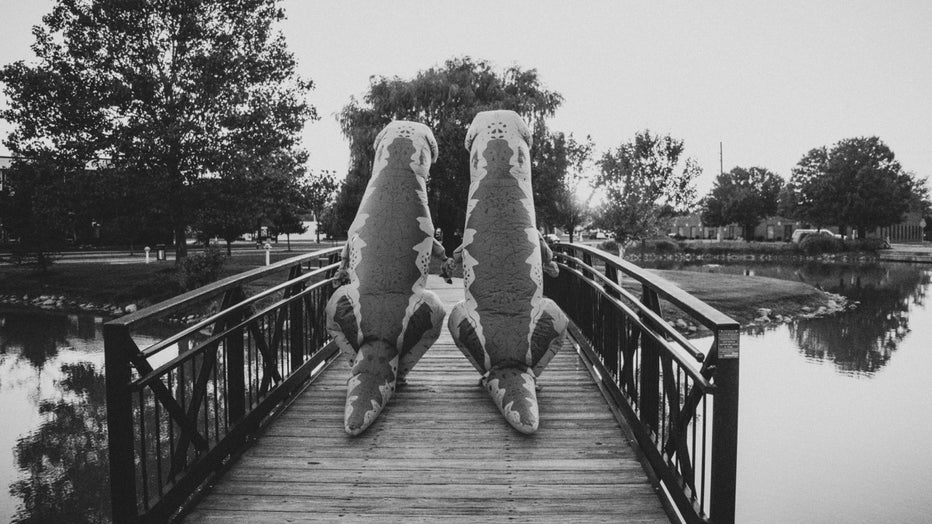 Alas, the story of Sean and Hali instead begins at Olive Garden five years ago, when the two met through mutual friends while working at the restaurant. Neither were aware of the other’s love for dinosaurs, which goes back decades.

When Hali was young, dinosaur books and the original Jurassic Park movie spurred her interest in the era. She initially wanted to go into paleontology, but there were too many minerals and rocks involved. So she graduated with a bachelor's in wedding planning - something she’s put to good use over the last year.

And yes, she has a favorite dinosaur. A Brachiosaurus - the largest animal believed to have ever walked the Earth.

“Their personalities were said to have mimicked cows,” she said. “You know, playful, kind, big and lovable.”

As for Sean’s favorite dinosaur? The Mosasaurus; although you probably know it as the massive aquatic dino in Jurassic World that lunges out of the water. And why does he love this particular reptile?

Sean grew up with a similar appreciation for dinosaurs. He used to have the toys and claims to have watched the first Jurassic Park every day when he was growing up. Sean’s family is also big on crafts. The big event of the year when he was younger was Halloween when his dad built mazes in the garage and put on haunted houses at the local elementary school. 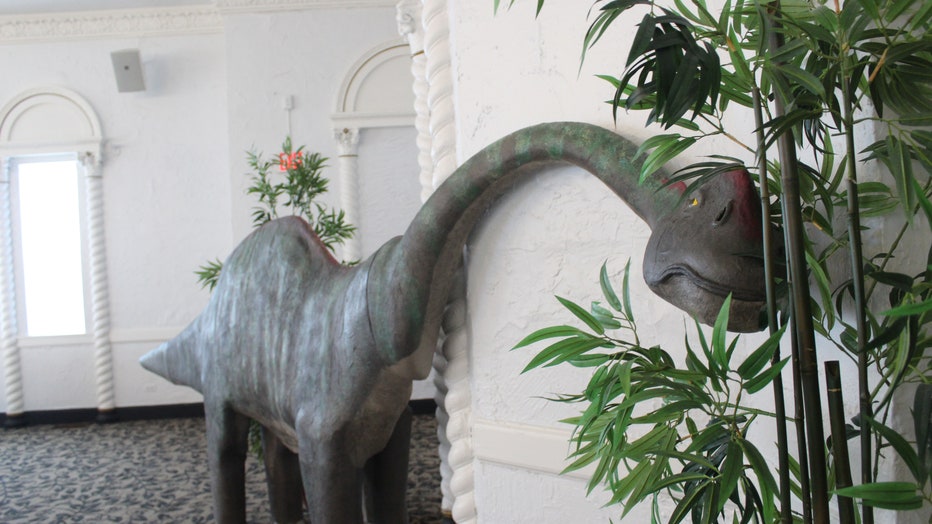 That knack for crafting and appreciation for bringing visions of prehistoric fantasy into wedding-themed reality played heavily after the two got engaged in August 2018. Sean’s dad helped build two of the biggest dinosaurs on display at the wedding. With the aid of Styrofoam, duct tape, paper mache, several pairs of hands, a few different open garages and several hundreds of hours, the products are impressive - and as life-sized as amateur wedding planners could achieve.

As Sean's sister Jacqui made some of the smaller dinosaurs dotted around the wedding, others scanned the Internet, garage sales and stores for anything dinosaur-related.

“Being me, I always pre-thought what I wanted for my wedding,” Hali said. “So I Pinterested it (meaning dinosaur wedding) to see if it’s really out there. I found all these awesome ideas of how to turn on the theme but still keep it elegant.” 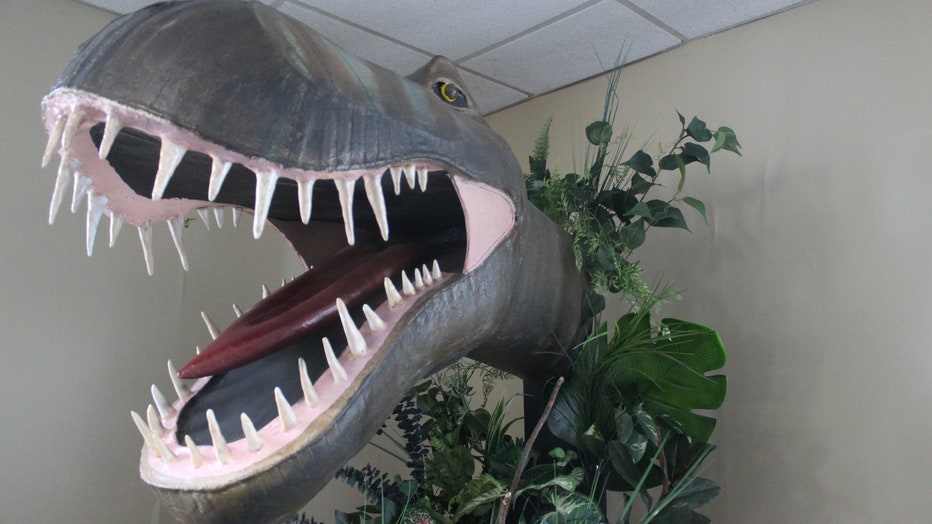 So how does one accomplish elegance against the backdrop of fake ferns, peering dinosaur eyes and an “Are you as tall as a Velociraptor” cardboard cutout? You start at the entrance, where two big brown doors under a “Jurassic Park” sign open to the tasteful hallway of the Blossom Heath Inn in St. Clair Shores. Instead of using boring old numbers to tell visitors where to sit, you guide them with miniature dinosaur figures that have their corresponding name and table arrangement. You use wooden pallets dressed in green foliage as blinds on the windows. 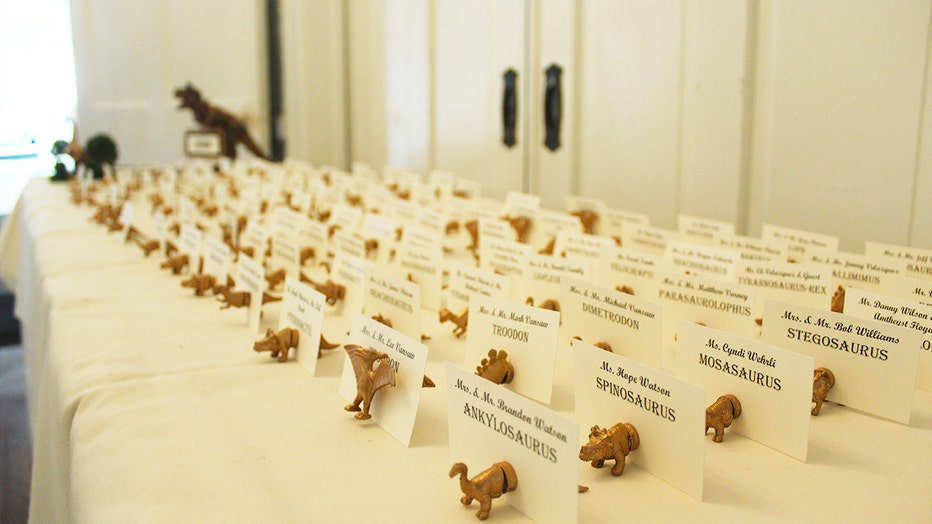 Even the bridal party is in on the theme, with the bridesmaids’ flip flops adorning dinosaurs and the groomsmen wearing Jurassic Park t-shirts under their suits.

Finally, instead of using that boring pillow that cradles the jewelry and is brought down the aisle, you hand the ring bearer a golden Brachiosaurus with the rings on the figure’s neck.

The only thing not dinosaur-themed? The bride’s dress - a traditional white gown, because at least something has to follow the conventional rules of weddings, right? Except for the bouquet she’s carrying will have little gold dinosaurs in it. And the groom’s boutonniere will too. 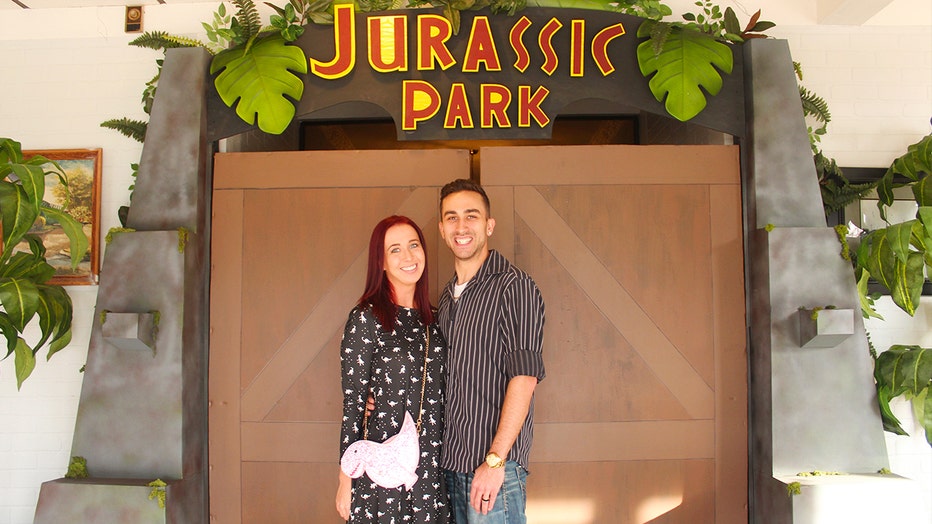