MACOMB CO. Mich. (FOX 2) - It was over the summer that Consumers Energy workers discovered they weren't alone during their construction.

"They were installing a pipeline project here in Macomb County and along the way, our employees started noticing some red foxes were very curious about work being done," said Debra Dodd of Consumers Energy.

After befriending two red foxes that had wandered onto the worksite of a pipeline being constructed, workers for Consumers Energy noticed their new companions had started losing their fur and tails in the fall. As it turns out, it's a common disease called mange, and one the employees sought to treat.

That curiosity became more permanent as the furry friends made several visits to the project, becoming the utility's unofficial mascots for the summer.

"Foxes entering our construction zone, and they were very friendly," said Rich Pulley, a project manager with Consumers.

Soon enough, the foxes had called the surrounding area their home. But not soon after, the employees noticed something was wrong.

"Throughout the summer, they were monitoring them and started noticing that the foxes were losing their tails, losing their fur, weight," said Dodd.

Seeing an ulterior mission during their work, the employees made a call to the Department of Natural Resources in an effort to help the foxes. As it turns out, those symptoms are common among animals with mange - the product of parasitic mites that irritate the skin.

So the employees sought out some medication to help the foxes get better. Knowing where their home was, the workers sprung into action. 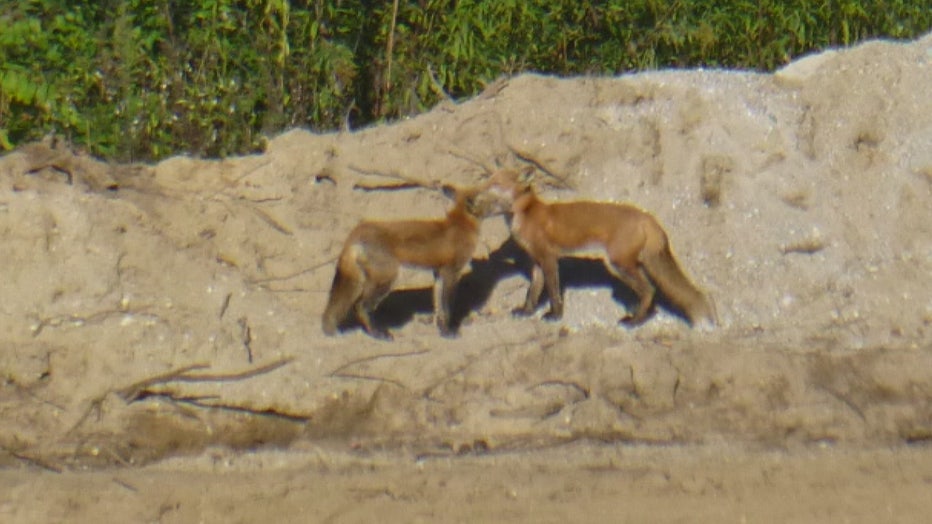 "We knew where their den was and we were able to target-feed them with the medication and some meat," said Dodd.

"After successfully being treated with the medication, the fur was growing back and their tails grew back so they were nice and bushy again," added Pulley.

And just in time for the cold weather to return, too.