Man poses as good Samaritan at crash site before robbery, shooting of victim

A man was injured in a crash and someone who approached like a good Samaritan, instead robbed him at gunpoint and shot him. The entire incident was caught on camera at a furniture store.

DETROIT (FOX 2) - A man was injured in a crash and someone who approached like a good Samaritan, instead robbed him at gunpoint and shot him. The entire incident was caught on camera at a furniture store.

The victim man crashed his car into a U-Haul truck and what happened next played out more like a movie during a stormy overnight on Detroit’s east side.

Shortly, after the crash, surveillance video shows a white van creep up. A man wearing a hat, jacket, and dark polka-dot shorts got out and looked like he was going to help the crash victim - but preyed on him instead.

"He’s headed for the door. the guy stops him right there, pulls the gun out," said store owner Shaquita Calloway narrating the video. "You see him pulling the gun out? It’s in his hand. (He) closes the door like, ‘Uh-uh give me that bag.'"

According to Detroit police, the victim survived.

Then, the suspected robber leaves in the van.

FOX: "When you first saw what happened?"

"I was shocked. Shocked," Calloway said.

The crash and robbery happened in front of her business — Shas’ Furniture and Mattress Outlet.  She rents out the U-Haul truck, which was hit.

Calloway says she happened to drive by her shop after dropping off a friend from a July 4th party — just before 3:45 a.m.

"I look over here - the lot is full of police," she said. "I see the car crashed into my U-Hauls."

It wasn’t until Calloway walked in her store the next day, looked at the surveillance clips and saw the robbery. So, she called Detroit police back.

The damage done to the truck will be covered by insurance. One of the store owners says Detroit police have an idea of who the robber is.

"Obviously, you cannot count on the kindness of strangers or even accept the help of a good Samaritan nowadays because you see what happens," she said. "That good Samaritan turned out to be a villain."

Or in this case — villains — as a man in a backpack tries to cash in on the opportunity and rummages through the crashed car.

It’s worth noting all of this unfolded before Detroit police arrived.

There have been no arrests yet in this case. 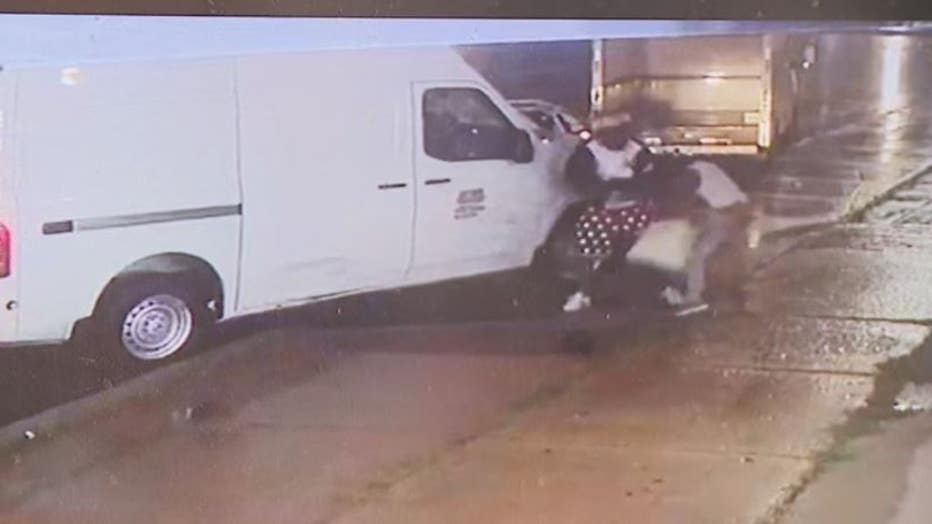