One of the crash survivors is just 18 years old, he’s recovering at a local hospital. Daria Beavers' brother made it out of a crushed Dodge Charger alive - and her family are counting their blessings.

DETROIT (FOX 2) - A fiery crash involving several big trucks and vehicles killed one person and shut down southbound I-75 for several hours Wednesday.

One of the crash survivors is just 18 years old, he’s recovering at a local hospital. Daria Beavers' brother made it out of a crushed Dodge Charger alive - and her family is counting their blessings.

"I’m just grateful honestly, I am truly grateful," she said. "I have no other words. I just say thank God."

He survived a four-vehicle crash on southbound I-75 in southwest Detroit Wednesday afternoon.

"When he sees his car, when he’s actually able to be back, he’s going to be like, 'I made it out of this. I’m 18 years old and I survived a near-death experience,'" Daria said.

According to Michigan State Police, a double gravel hauler struck a pickup truck just before the Fort Street, Schaefer highway exit—killing the man inside.

It then hit a semi-tanker trailer, which fell on top of her brother's Charger.

Related: 1 dead after gravel hauler hits pickup and tanker truck on I-75 in Detroit

"Being here it was just nothing but tears just seeing that he made it out of this," she said, "and knowing it can be a whole different story right now."

The crash shut down southbound I-75 for hours. State police say the pick-up truck caught fire after the crash.

The driver of the double gravel hauler and semi-tanker were not injured.

State police say Daria’s brother suffered a shoulder injury. She says he was just a few feet from safety when the crash happened

"Literally this is his exit to get off," she said. "So just thinking about how close he was to getting off of the freeway. Had it been a few seconds earlier or a few seconds later. It’s just that a little bit of time matters so much, and I don’t think people realize or understand that.

"Again I pray for everybody else involved and who might have been affected by this whole accident. It’s an unfortunate event."

State police are working to get in contact with the family of the person killed in the crash.

Troopers reopened the freeway around 9 p.m., it was shut down for roughly seven hours. 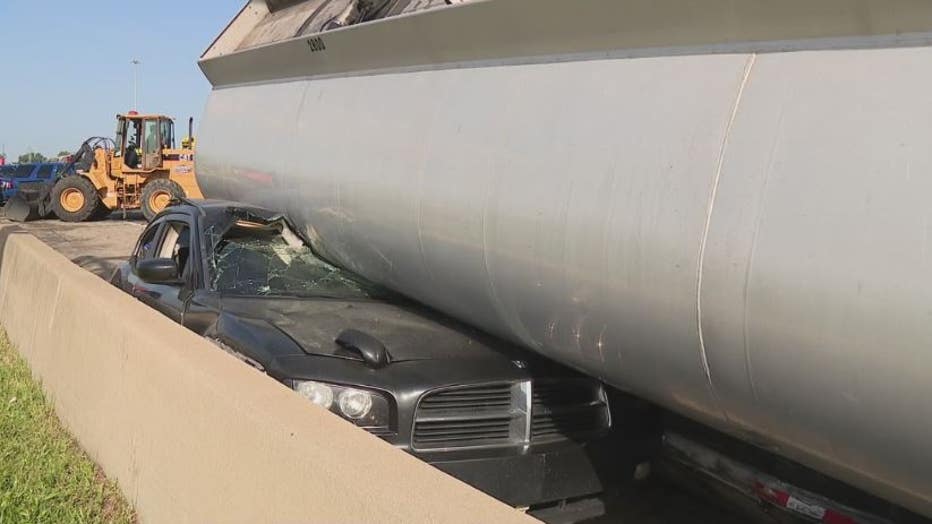