(FOX 2) - A Mount Clemens man is facing multiple charges after leading police on a pursuit in Macomb County that ended in a wrong-way crash on I-94.

Police released dash cam video that shows the suspect driving on the wrong side of the interstate during the pursuit, resulting in a nearly head-on crash with a pick-up truck.

The Chesterfield Township Police Department released video of a police pursuit that ended in wrong-way crash on I-94.

Police were first called to the Target in Chesterfield Township on Gratiot at 23 Mile Road for a retail fraud in progress around 6:30 p.m. on Monday, July 27. Police say store security said the suspect had stolen electronics and that they saw him leave in a silver Saab.

Police caught up with the car at I-94 and 23 Mile Road and attempted to pull over the driver but he did not stop. Police then looked up the vehicle and learned the 2007 Saab 93B had been reported stolen out of Chesterfield the week prior.

Police say the pursuit continued on I-94 through Metro Parkway at high speeds. The driver eventually got off I-94 at Shook Road, lost control and drove off the ramp onto the grass embankment. He was able to gain back control but then crashed into a Chesterfield police car.

The pursuit continued eastbound on Shook Road through the road construction site and back to the EB I-94 on-ramp.

The suspect attempted to enter EB I-94 but at the bottom of the ramp, he turned left instead into oncoming eastbound freeway traffic, as you can see in the video.

The suspect is then seen driving head-on into the evening rush hour traffic and eventually crashed into a 2005 Ford F150. 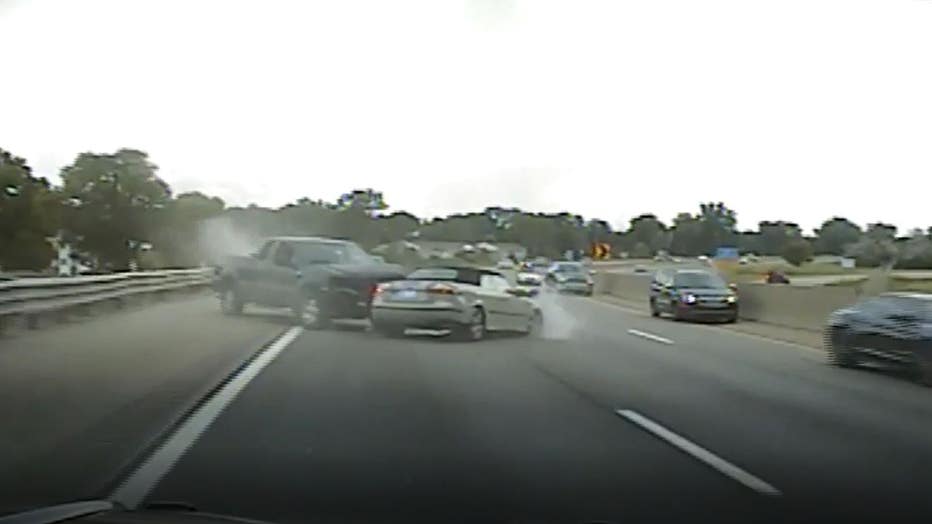 Police say the suspect then got out of the car and tried to open the car doors of two separate vehicles stopped at the crash site on I-94 but was without success. He continued to run off the interstate and into a nearby apartment complex where a Macomb County Deputy caught up with him and took him into custody.

Police did not specify if the man in the Ford was seriously hurt.