MONDAY NEWS HIT - The city of Detroit was one of the first to roll out drive-thru testing for COVID-19 when it pivoted efforts to ramp up screening for the pandemic. Now, it could be one of the first cities to start distributing vaccines to its residents.

Mike Duggan estimated the city would need to vaccinate at least 5,000 residents every day just to keep up. But in the eyes of Detroit's mayor, there are even bigger obstacles ahead.

"This country is not geared up," said Duggan on Face the Nation Sunday. "So to me, people saying 'vaccines are coming, vaccines are coming,' we haven't begun to address what it's actually going to take to inject people with the vaccine."

There's a mountain of challenges ahead as the country readies to distribute vaccines for COVID-19. The mayor of Detroit suspects it'll take a lot just to convince people to get the vaccine.

So far, two companies have requested emergency authorization from the U.S. to begin administering the vaccine. After Pfizer submitted their request to the Food and Drug Administration last week, Moderna made a similar ask Monday morning. Both vaccines have been shown to be more than 90% effective at treating symptoms of COVID-19.

But if a year's worth of trying to mass-produce testing was evidence of the struggles that a fragmented supply chain and public distrust of the virus can prove, then distributing a vaccine could be even tougher.

As it stands, Detroit will be among the first cities to get vaccines. Henry Ford Health Systems is among the few hospital chains in the country approved to receive and distribute the vaccine. Its five hospitals are preparing to begin inoculation as soon as Dec. 12.

Even so, Duggan suspects it could take three-to-four months to vaccine everyone in the city.

Those who will receive it first are health care workers, followed by police, emergency crews, and then citizens over the age of 65.

A winter weather mix is heading for Michigan that could spell trouble for commuters for the beginning of the week.

After a long holiday weekend, a winter weather advisory will be posted for most of southeast Michigan through Tuesday as a large system travels northwest through the Midwest.

The precipitation will likely become a bigger issue as the hours continue, but what's forecasted to fall won't be overwhelming. 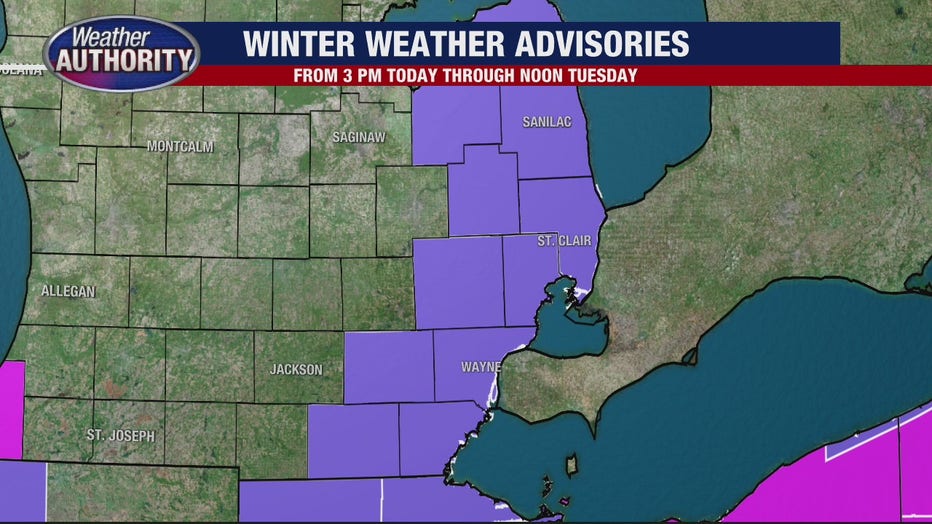 Monday weather will kick off with showers that won't get higher than the length of residents' grass. But by 3 p.m., about half an inch is expected to fall in southeast Michigan with a little more north of Detroit.

After the chilly showers brought by a low-pressure system riding the Appalachia Mountain range, more snow will move in as night returns and Tuesday arrives.

Detroit could see as much as four inches as snow while conditions in the thumb and up the eastern coastline could see even more.

Most of this snow will fall over the course of 30 hours meaning conditions could remain stable enough for most travelers.

That being said, for commuters heading to work this week, the morning you'll want to be wary of is Tuesday, when most of the snow will have fallen.

After that snow, it's smooth sailing for the rest of the week as temperatures climb back into the 40s.

A federal court will hear arguments in the latest COVID-19-linked lawsuit after the restaurant association in Michigan sued the state to stop gathering limits and closures of indoor dining.

The health department was sued in the west district court by three plaintiffs who believe the temporary lockdowns could have unnecessarily negative effects on the industry.

A federal court on the west side of the state will hear arguments from the restaurant association and the health department over the necessity of new lockdown rules that have closed indoor service in restaurants.

The new restrictions went into place in mid-November as the newest effort to slow the rampant spread of the virus in Michigan.

"The Michigan Restaurant & Lodging Association (MRLA) has filed in federal court for injunctive relief from the Order issued on November 15 by the Michigan Department of Health and Human Services (MDHHS), which prohibited indoor dining in restaurants for the second time this year. We have taken this action only after careful deliberation and as the last available option to prevent the outright devastation of restaurant operators and their hundreds of thousands of employees across the state," read a statement from the association president Justin Winslow.

The association's argument has been that not enough outbreaks have been attributed to restaurant settings, meaning the three-week shutdown is hurting bars and eateries more than it needs to.

Residents from Wayne County converged in front of the sheriff's office on Sunday to hold a collective prayer for the safety of one of the area's top cops.

His daughter said Napoleon is still capable of breathing by himself, but opted for a ventilator to allow his body to rest so it can heal.

"Ultimately, he was an intricate part in deciding to go on the ventilator because he wanted to do anything necessary to get him well," said his daughter Tiffani Jackson.

So far, more than 200 deputies from the department have contracted the virus. Police officers have been among the sectors hardest hit by the virus.

"We needed this," said Wayne County Sheriff's Office Chief of Staff, Michael Turner. "It's been a difficult year in the agency. We have 3 deputies, a commander die this year from the COVID virus."

The mother of five kids who just gave birth to twins prematurely is now in a coma after going into labor with COVID-19.

Her husband, a long-haul truck driver is now at home taking care of the kids who also all have the virus.

“It’s heartbreaking when I see their facial expressions when I go in there,” Steven Logan said. “It’s not like they are upset to see me, but they were expecting mommy.”

Their mother Jasmine, gave birth Nov. 17, more than a month prematurely. Doctors had hoped it would help her fight off the virus.

“They were hoping by doing this, it would give her lungs the capacity they need to breathe and give her antibiotics and steroids they couldn’t give because she was pregnant,” Logan said.

Unfortunately, that wasn’t the case, Jasmine is now in a medically induced coma.

To help raise money to lighten the load, Logan has started a gofundme. You can find more here.

Rain will change to snow Monday and Tuesday with slick conditions expected throughout.

Rain/snow will shift to snow by afternoon!

“Communicating directly and truthfully to the American people is one of the most important duties of a President,” Biden said in a statement. “I am proud to announce today the first senior White House communications team comprised entirely of women.”

“Our country is facing unprecedented challenges,” Vice President-elect Kamala Harris added. “From the coronavirus pandemic to the economic crisis, to the climate crisis, and a long-overdue reckoning over racial injustice. To overcome these challenges, we need to communicate clearly, honestly, and transparently with the American people.”

One of those women is Jennifer Psaki, a Democratic spokesperson. She will serve as the White House Press Secretary. She confirmed her hire in a series of tweets Sunday evening.