LANSING, Mich. - Michigan's health department is rolling out a new media campaign aimed toward drug users in hopes of better connecting them to services geared at harm reduction. 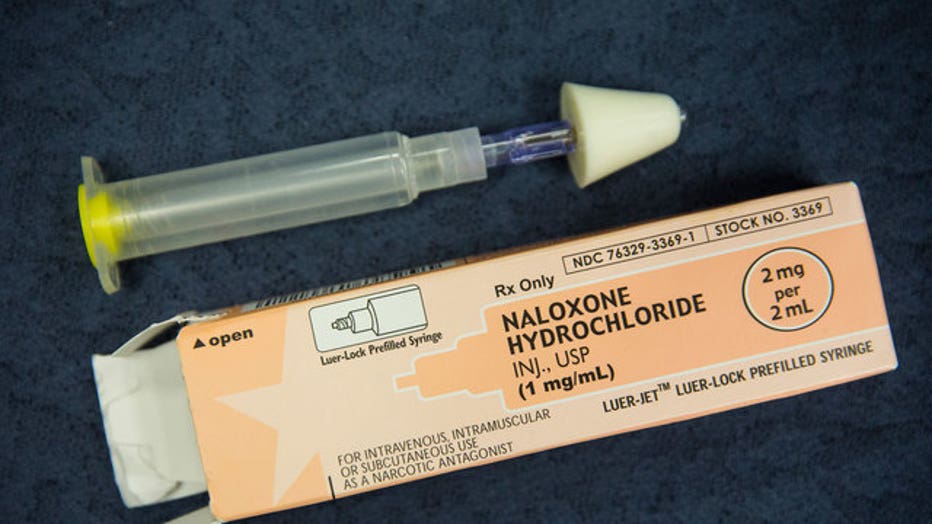 A kit of Naloxone, a heroin antidote that can reverse the effects of an opioid overdose, is displayed at a press conference about a new community prevention program for heroin overdoses in New York City. (Photo by Andrew Burton/Getty Images)

The near-million dollar launch arrives as twin public health crises from the opioid epidemic and COVID-19 have magnified issues of drug addiction and caused a surge of overdoses in Michigan and around the country.

The ad campaign features the lived experiences of former drug users who kicked their addiction after getting connected to harm reduction services like syringe access and narcan kits.

"Those who use substances are many times the first in a situation to respond to someone experiencing a drug overdose. It is critical we empower those who can most quickly help with the tools necessary to save lives," said Dr. Joneigh Khaldun, chief medical executive and chief deputy director for health at MDHHS.

Efforts to curb the use of opioids and other illicit drugs saw valuable progress vanish after the pandemic started. In the months after lockdowns first went into effect, health officials noted a substantial increase in overdoses.

Health officials with the state said the double tragedy of COVID-19 spreading freely mixed with the pervasive spread that prescription medication and synthetic opioids like heroin and fentanyl sent the number of overdose calls spiking.

RELATED: Michigan reports opioid overdose calls are up 26% during pandemic

The increase in overdoses followed what was a positive year in addiction news when Michigan saw a decline in the overall number of overdose deaths in 2019.

That trend isn't just in Michigan, however. The surge of overdoses hit the rest of the country as well. According to the Centers for Disease Control and Prevention, there was a 5% increase in deaths compared to the year before.

A review of data from the New York Times said if trends during the onset of the pandemic continued, it would lead to the sharpest increase in overdose deaths in years.

While COVID-19 laid bare the health impacts among different racial demographics last year, those disparities had already been on display among opioid users.

Even after Michigan reported a decline in overall overdose deaths linked to opioids in 2019, they still increased for Black residents. A lack of access to available treatments along with systemic inequalities has led to a disproportionate number of minorities impacted by the epidemic.

While data showed that overdoses among white residents increased the most during the recent surge, Black residents still suffered at a far higher rate.

A growing body of research is reporting similar findings, including a peer-reviewed academic article published this January.

The racial disparities from opioid addiction is why one of the primary groups targeted by MDHHS's new campaign is Black people who use drugs.

The $900,000 ad campaign will dot the state with billboards, gas station posters, digital and local media that use a "change at their own pace" tone that features people who have experienced the lure of addiction and overcome the burdens that are associated with drug use.

While previous campaigns have focused on the negative impacts of drugs, the new campaign is designed to connect people to recovery options.

Pulling from a $10 million investment to fight opioid addiction that was first announced in 2019, MDHHS is partnering with a group called Viral Strategies to coordinate the campaign.

"We applaud MDHHS for this moving ad campaign, featuring Michiganders doing harm reduction work in their communities, and offering critical information, hope, and dignity for people who use drugs," said Daliah Heller, Director of Drug Use Initiatives at the firm.

The ad campaign is a window into a growing component of Michigan's efforts to curb opioid use, which intends to expand the availability of naloxone - commonly referred to as Narcan - and increasing access to syringe service programs.