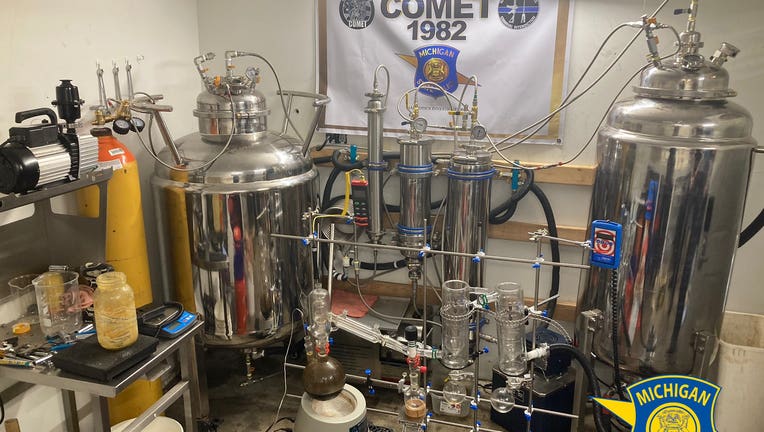 CLINTON TWP., Mich. - Police executing a search warrant in Clinton Township uncovered a chemistry set one might sooner find in a TV show than in a personal residence.

But on Tuesday, the County of Macomb Enforcement Team uncovered a "highly elaborate THC extraction lab" inside a home.

A Michigan State Police post online of the drug-making operation said had the equipment exploded, "it would have destroyed the garage along with damaging the neighboring residences."

Items seized from the home include 30 pounds of marijuana, 10 plants, and a gun. The Hazmat team from Oakland County had to disassemble the sophisticated lab.

Michigan State police say that the house was running a butane lab which extracts THC from marijuana plants to make dabs and butter and wax and other highly concentrated THC.

An image of the setup, which featured an array of vats, beakers, burners, pressure dials, and scales was decommissioned by the Oakland County Hazmat Team later in the day.

State police took the homeowner to the station but released him with no charges yet the investigation continues.    But Clinton Township won't let him return to the house.

The equipment was utilizing butane, which is commonly purged from mixtures that leave a highly concentrated form of THC. However, the process can also be dangerous if something goes wrong.

Fire officials say had the lab exploded, it could've destroyed a number of homes.

The suspect was transported to the Clinton Township Police Department for interview and processing.