(FOX 2) - Since it's debut in metro Detroit in 2016, Rob Cortis of Livonia, Mich. has been touring the country in his own creation, a 60-foot long float he calls the Trump Unity Bridge.

But the float was recently stolen and destroyed while it was out-of-state making its rounds across the country.

"We're on our national support police Back the Blue Tour and it's all about the Trump America first agenda," Rob Cortis said.

On Friday around midnight in Tulsa, Okla. Cortis was checking into a hotel and unloading luggage when someone got behind the wheel of the truck and took off.

"There's trees the parking lot when you come out of it. He smashed into those trees and pulled it over the curb," Cortis said. Cortis then hopped in the car with a stranger, a fellow Trump supporter, who drove him to the scene of the crash two miles away.

Police in Tulsa did make an arrest of the alleged truck thief. Cortis told us he believes it was likely just a crime of opportunity, but the damage is pretty extensive.

"All the T-R-U-M-P was smashed down, the Statue of Liberty was damaged." 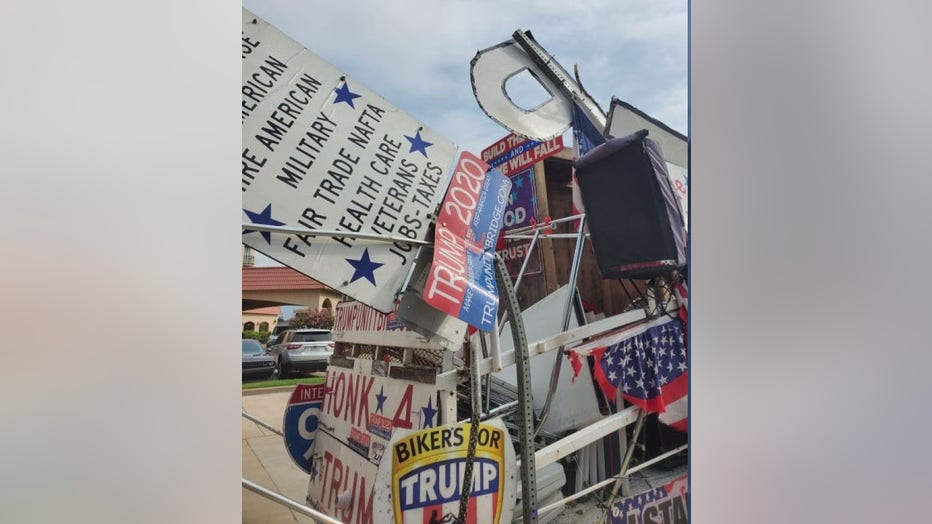 "We are not going to wait. We are going to do temporary repairs. People can support and help us out at trumpunitybridge.com."

Despite having a message of unity, Cortis said this isn't the first time he's been victimized. It happened another time earlier this summer while driving in California.

"They are pounding on car and shaking it. They put signs over my windshield so I couldn't see."

Cortis said he won't be deterred and, in fact, he plans to make the needed repairs and have it back in Detroit for an event on Sept. 2.