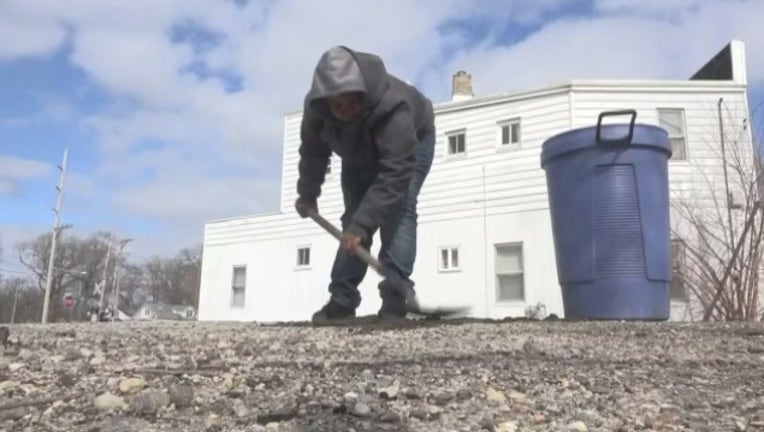 Michigan roads are bad - but you already know that. They're so bad the new governor's platform was based on fixing them - her plan could be pricey - but she's also getting a bit of help from a 12-year-old in west Michigan.

Monte Scott, 12, started filling potholes on a street near his home in Muskegon Hiehgts last week, according to WZZM. He filled up a trashcan with dirt, which he dug up from his back yard, and then unloaded it into the potholes himself to try and even out the road.

“I didn't want people messing up their cars like my mom did,” Monte Scott told WZZM. “If somebody were to drive down the street and hit a pothole, and then would have to pay like $600-700 to get their car fixed, they would be mad."

Video of his acts were uploaded to Facebook, where Monte is filling in a crater on the road that's larger than the base of his trash can. The road behind him is pockmarked with patched spots.

He didn't tell anyone. His mom, Trinelle Scott, said even she didn't know he was doing it.

“I was at work, and I got a text message from my niece, and she'd seen the video on Facebook,” Trinell Scott told WZZM.

As of Sunday, WZZM reports he had filled around 15 potholes near the family's home. He's hoping to finish the street to help the community.

While not a long-term fix, his work comes amid attention to the issue of crumbling roads across Michigan as the governor and legislators try to find ways to pay for road improvements.

Governor Gretchen Whitmer's platform in 2016 was to "fix the damn roads". Last month, in her budget proposal, she pitched a gas tax hike that would raise the gas tax an extra 45 cents per gallon to get the $2 billion needed to fix the roads.

Her plan was met with skepticism from republican lawmakers. It's pending legislative approval.