DETROIT - With a surge of Super Tuesday voting pushing many states past their 2016 totals, political analysts are expecting Michigan's primary race will mimic similar results.

Compared to the presidential primary four years ago, which featured competitive races between both Republicans and Democrats, it's unlikely the March 10 primary will yield more total votes in Michigan. However, political science professors like Corwin Smidt anticipate the vote totals on the Democratic ballot to exceed votes cast in 2016.

"In 2020, I don't expect that much of a decline (in total votes) because the increase in the Democratic turnout could be about 1.5 million," Corwin, a Michigan State professor said.

In 2016, there were 1.2 million votes cast in the Democratic primary. The Republican primary netted slightly more at 1.3 million.

Using voter registration data, turnout from previous elections, as well as recent polling numbers, Corwin's model predicted 2.3 million total votes in Michigan's primary. Along with the votes being cast in Michigan's Democratic race, he estimates about 800,000 voters will participate in the Republican race.

Part of what's buoying those numbers was an increase in youth voter turnout during the 2018 midterm race, a gubernatorial election for Michigan residents. Corwin anticipates seeing similar trends in the 2020 race. Another factor driving up predictions is the Democratic race attracting some independent voters.

"One thing is there are some people not considered Democratic or Republican, who were more attracted to vote in the GOP primary in 2016, are now interested in the 2020 Democratic primary," said Corwin. 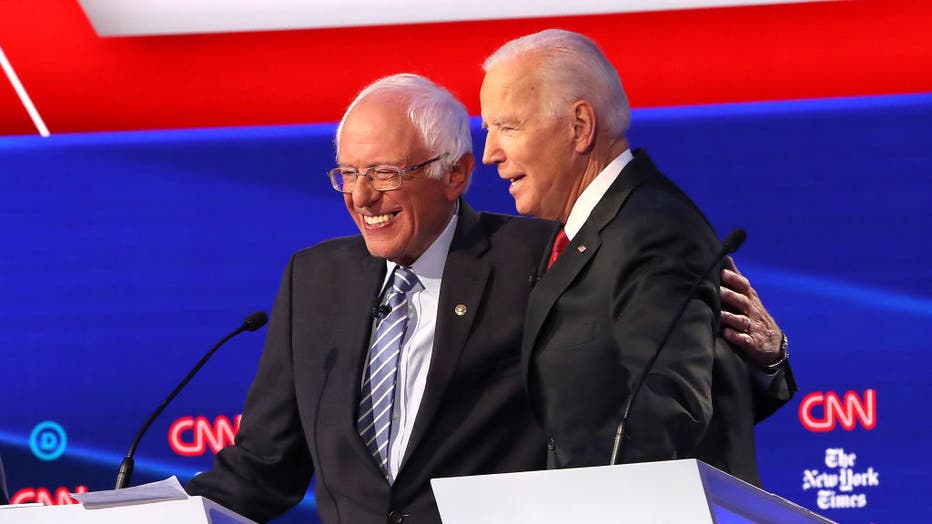 Sen. Bernie Sanders (I-VT) (L) and former Vice President Joe Biden put their arms around each other during the Democratic Presidential Debate at Otterbein University on Oct. 15, 2019. (Photo by Win McNamee/Getty Images)

Mark Grebner, another analyst who founded a political consulting firm in Lansing anticipated seeing similar numbers for Michigan's primary race; about 2.2 million votes. However, what drives voter turnout has more to do with the political narrative shaping the election.

"People like a story. People vote in elections when it's part of the drama and they're playing a role. That's how you get big turnout," Grebner said. "Not that it's important (the election), but that you understand the story."

"To the extent that we have a story that develops, we'll have better turnout. If it falls apart....it will affect election turnout," he added.

So what's the story that's developing? A week ago, it was Vermont Senator Bernie Sanders running away with the nomination after he pulled out victories in the race's first three states. Then on Saturday, former Vice President Joe Biden scored a big win in South Carolina. His victory forced moderate candidates Pete Buttigieg and Amy Klobuchar to drop out and endorse him.

As endorsements and favorable polling among black voters began to come in, Biden stormed Super Tuesday, winning 10 of the 14 states.

The race for the Democratic nomination is now between Sanders and Biden. With such a small margin between each candidate's delegate total, the election narrative will continue to evolve over the following weeks as more states hold elections.

Michigan voters got their first peek at the direction of the state's electorate Tuesday night, after a survey of 600 likely Michigan Democratic primary voters was conducted by the Detroit News and WDIV (Local 4). The survey found Biden leading Sanders by almost 7 points, garnering a 29% to 22.5% score.

"In order for Sanders to win, he has to continue riding this huge wave from 2016," said Corwin.

Corwin elaborated that in order for Democrats to see some of the success they did in 2018, it'll be important for them to motivate young voters during election season.

Another factor considered something of a wildcard this primary is the sway Michigan's new absentee ballot law will have on voter turnout. Since expanding the option of voting absentee, the state has seen a historic turnout in mail-in ballots. The secretary of state said as of Monday, clerks had received more than 800,000 ballots - a 78% increase compared to 2016.

It's unclear if that increase in absentee voting will add to, or eat into the total vote count on March 10 as this is the first statewide election the new method is being used.