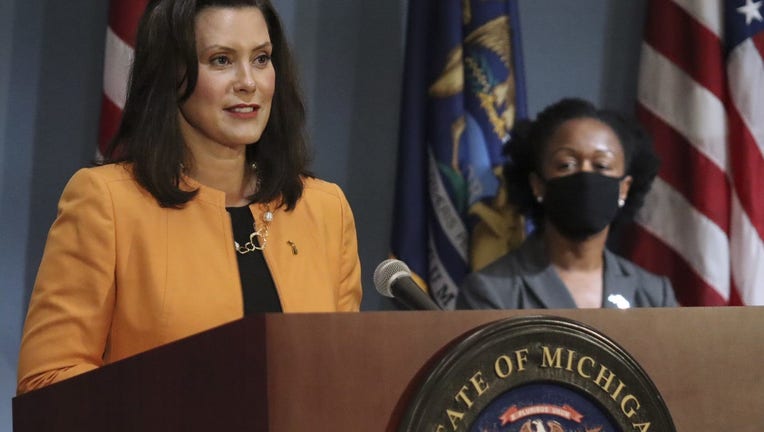 Gov. Gretchen Whitmer speaks in Lansing about COVID-19 in Michigan.

(FOX 2) - Michigan Gov. Gretchen Whitmer has rolled back the Upper Peninsula to Phase 4 after a recent surge in COVID-19 cases there.

The governor's office sent out a news release Friday afternoon saying Gov. Whitmer had signed an executive order that moves the region from Phase 5 back to Phase 4. The executive order goes into effect Friday, Oct. 9.

The rollback will require people who can perform work remotely to do so, require schools to enforce mask requirements with limited exceptions and place limits on social gatherings and stores that match those in place in most of the state, among other changes. You can see a list below.

"After seeing the increase in cases in the U.P. region over the past several weeks and consulting with medical experts, I have decided to take action to protect U.P. families and move the region back a phase. I know this is hard. I know it will be an adjustment. But we can’t let our guard down,” said Gov. Whitmer in the news release. “COVID-19 is still a very real threat to our families, frontline workers, and small businesses. Everyone should implement these changes as swiftly as possible. This virus doesn't care if you're rich or poor, a Republican or a Democrat, young or old. No one is immune. Right now the most effective weapon we have is pretty simple: it's wearing a mask that covers your nose and mouth. It's washing your hands with soap and water. And maintaining six feet of physical distance from one another. Let’s all be smart and stay safe.”

Although the Upper Peninsula had very low numbers from March through most of June, the region’s numbers began rising in late June, persisted at an elevated level through mid-September, and then began sharply increasing at that time, giving it right now the most concerning numbers in the state.

The most recent case rate, adjusting for lag, has the region with 283 absolute cases per million and 5.1% positivity.

Region 6, which is the Traverse City region, has not seen a comparable surge and still remains in Phase 5. It is the only region in the state to be in Phase 5.

The governor’s order will implement the following changes in the Upper Peninsula: