LANSING, Mich. - Don't look now, but the cautious optimism expressed by Michigan health experts concerning the pandemic may be starting to show up in daily COVID-19 data as the state begins to report an ever-so-slight decline in new cases.

Even as deaths remained high and uncertainty about the impact of Thanksgiving remained, Michigan reported 4,905 new coronavirus cases on Wednesday, among the lowest reported in December.

"We're seeing a decline in the case trend rate for all regions," said Dr. Sarah Lyon-Callo, the director of the Bureau of Epidemiology and Population Health during a virtual press conference Wednesday.

Michigan's top disease expert expressed "cautious optimism" after seeing a decline in new case rates, which fell from 610 cases per million last week to 516 cases per million this week. Every region in Michigan remains at the highest level of risk, according to data from the state health department.

However, according to the Centers for Disease Control and Prevention, every region has also seen declines in new cases. In Detroit, the cases per million have fallen over the past 14 days. 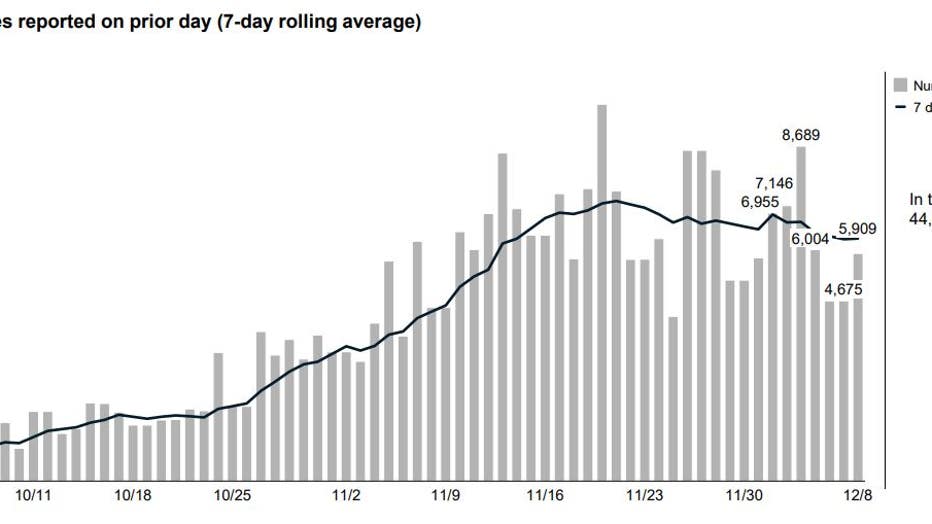 The 7-day rolling average for new cases in Michigan

Experts have said the cases per million people, along with the hospitalization rate and positive test rate are the three metrics being tracked closest.

But pitfalls remained as the state saw a drop in daily testing that might make it harder to identify enough cases in the state for an accurate reading. "When we see testing declining and the (positive test) percentage going up, that's a sign we need to be testing more."

On Nov. 15, the positive rate of coronavirus tests was 14%. A week later it fell to 13%. Last weekend, the rate climbed back up to 14.4%, which included a large swath of positive tests from the department of corrections.

Any good news yesterday came against a dismal backdrop in the U.S., which had one of its deadliest days in public health history when more than 3,000 people died of COVID-19. Very few events have claimed more lives on a single day in U.S. history.

The Midwest has been hammered by the pandemic's latest surge, with several states reporting some of the highest death and hospitalization rates. Michigan and Wisconsin have both reported declines in new cases.

Earlier this week, Gov. Gretchen Whitmer extended her COVID-19 restrictions 12 more days. After mandating stricter rules on schools and restaurants, as well as closing several other businesses that can't ensure social distancing and mask-wearing for three weeks, her health team saw reason to push the order a little longer.

Among the primary concerns was potential gatherings during the Thanksgiving holiday. Both Lyon-Callo and Dr. Joneigh Khaldun have said it's too early to tell what impact holiday travel will have on the coronavirus in Michigan.

Some other statistics to take note of:

The governor will be giving a press conference Thursday at 1 p.m. where she will update the state more on the status of its coronavirus cases.