CANTON, Mich. (FOX 2) - The Pfizer vaccine is officially being distributed across the country after thousands of volunteers stepped forward to try the dose first. Among them were a Michigan mother and son who shared their experience with us.

Michelle Hall and her son, Hunter, were some of the first people in the world to get the Pfizer COVID-19 vaccine as they participated in the clinical trials. It wasn't exactly Michelle's idea and it took a bit of convincing from Hunter who said it was going to change the world.

A Canton mom and son were some of the first people in the world to get the COVID-19 vaccine. Both say being part of the test was worth it.

The 22-year-old convinced his 58-year-old mother, both of Canton, to participate in the trial

"We were sitting in the living room watching FOX2. You guys did a thing where they talked about how they were looking for volunteers as young as 18," Hunter said.

The vaccine is just beginning to roll out and Americans started receiving some of the first shots of the vaccine on Monday.

"I immediately went on and signed up because I wanted to do one of the vaccine trials for a while, especially the Pfizer trial for a while. And then I spent 30 minutes convincing her to sign up," Hunter said. 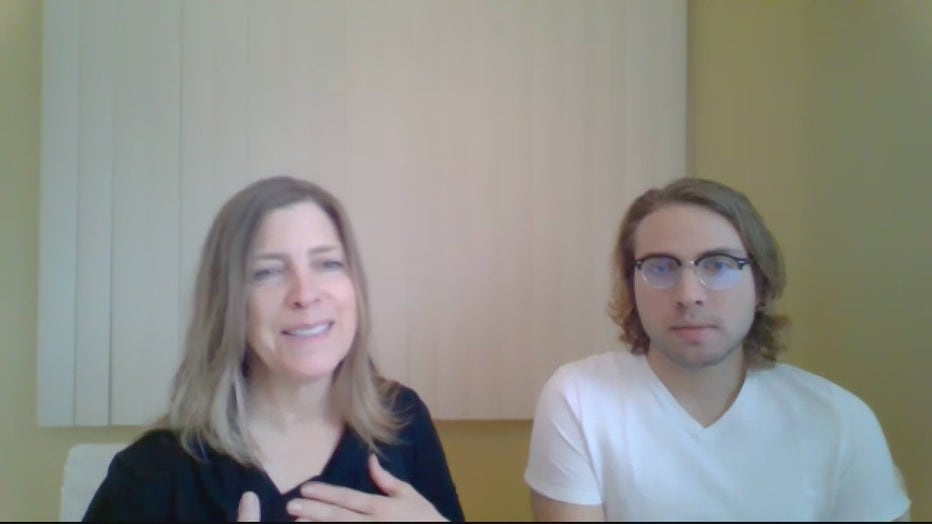 Michelle and Hunter Hall were two of the first people in the world to try the COVID-19 vaccine.

The recent graduate from Michigan State University left Lansing a year early with a degree in microbiology. He says since the pandemic began, he’s learned a lot about the deadly disease.

"I spent my last semester basically on zoom meetings with professors talking about COVID-19. That was all we talked about," he said.

He said he specifically wanted to do the Pfizer vaccine because of the technology the Michigan company is utilizing.

"Number one reason is I really like MRNA technology. It is not only the safest but also the most effective," Hunter said.

So, while feeling helpless during quarantine, the two eventually getting two doses three weeks apart.. Hunter says he felt nothing, and likely got a placebo, but his mother likely getting the vaccine and said she experienced a low-grade fever and body aches.

"I just had a day of uncomfortable symptoms and then I was fine. I don’t want to scare anybody off by telling them that," Michell said.

The two said the experience has brought them closer together and both hope they can help ease others' fears.

"It’s been really cool to have someone to do this with," Hunter said.

"Don’t be afraid. When your time comes to get it, it’s a piece of cake, really," Michelle said.