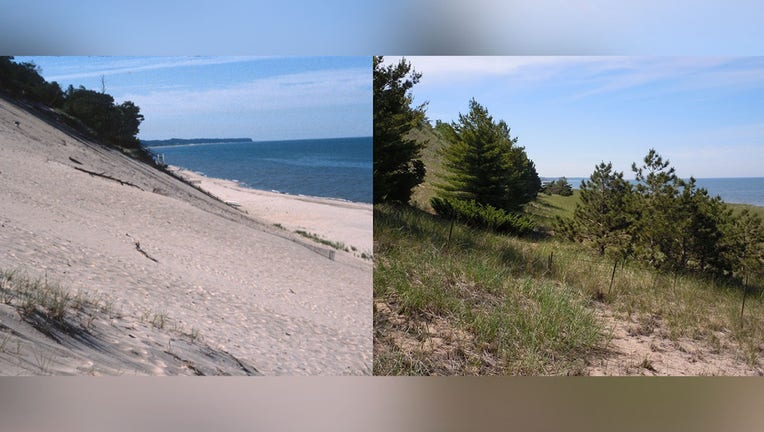 FERNDALE, Mich. - In 2001, a Michigan State University professor snapped a photo of a west Michigan beach, and then took the same image in 2014. The two photos were shot from the same place, yet they could not look more different.

In the older shot, bare sand stretches to the end of the photo and up the dune next to it. But in the newer shot, the entire beach is covered in grass. Michigan's dunes may always be moving, but what could explain changes to their surface?

The difference between the two is the subject a new study that seeks to better understand one of Michigan's most iconic features. 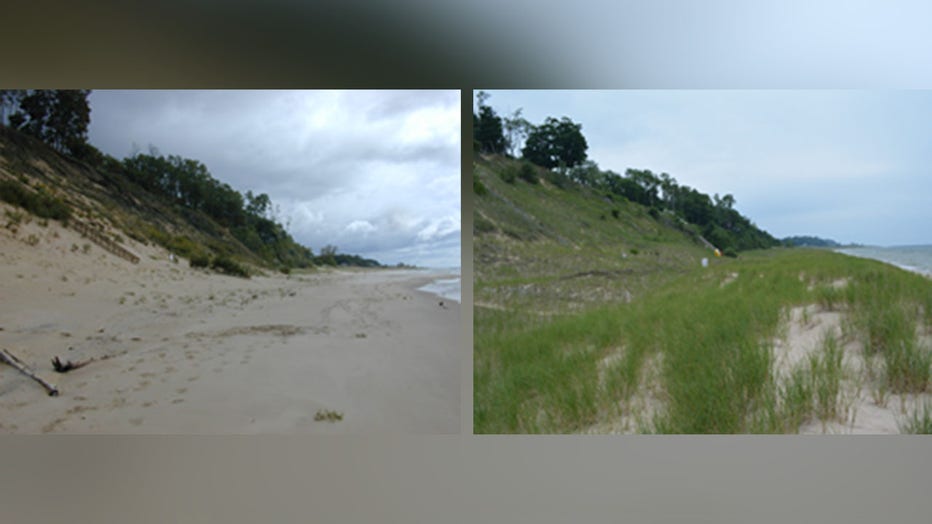 These two photos, both taken by Dr. Alan Arbogast, were shot from the same spot 13 years apart. The difference in vegetation is now the subject of a study analyzing dune behavior.

"Dune systems are notoriously very complex," Kevin McKeehan, a dune researcher said. "It's one of the most complex and dynamic geographies on the surface of the Earth."

Tim Allen declared that the state's sand dunes were Pure Michigan 12 years ago, but those same dunes may look very different now - even unrecognizable to some.

"They're changing dramatically, but to the human eye, to someone who gets up every morning and looks at them, that change may not be perceived," said McKeehan.

That's why McKeehan and Alan Arbogast, the photographer of the 2001 and 2014 beach photos and an expert on dune morphology, ditched the human eye for something more dependable for their study: historic photographs.

By replicating old photographs at Sleeping Bear, Warren, Silver Lake and other west Michigan dune sites with updated versions, the researchers could better identify visual changes to the sandy landscapes. The study, published in December 2021, solidified suspicions from Arbogast's experiment, which took place near the town of Montague.

Dunes along the eastern side of Lake Michigan are increasingly being covered by grass, trees, and other plants. McKeehan and Arbogast have some theories about why, but uncertainty remains.

Michigan's sand dunes don't normally stay still because the surrounding conditions are always changing. Strong winds and eroding waters from the Great Lakes constantly work against them. That may explain their movements, but what would prompt an increase in vegetation? 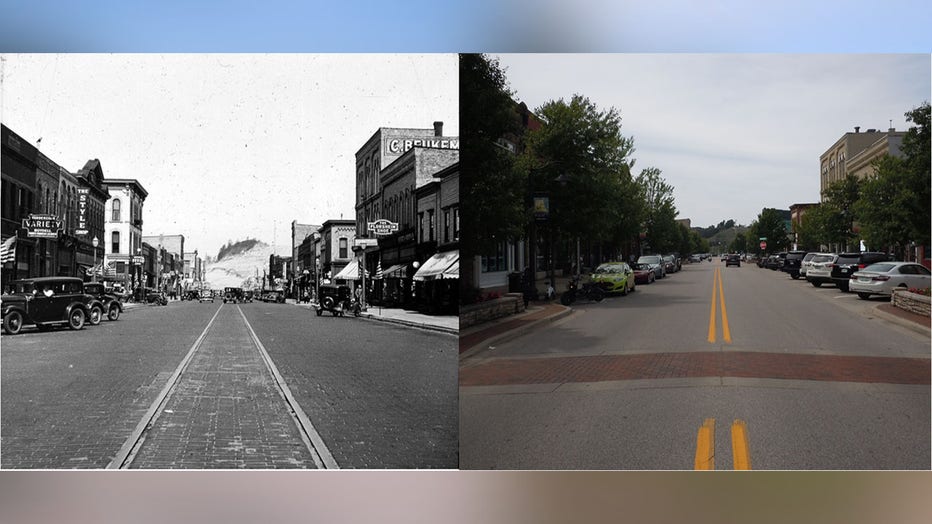 Two photos from downtown Grand Haven. The left photo (credit: Bentley Historical Library at the University of Michigan) was taken in 1935. The right photo (credit: Kevin McKeehan), was shot in 2019. At the end of the street is Kitchel Dune, which is

Repeat photography - taking photos in the same exact place that older photos were shot to show change on a landscape - is popular in the western U.S. But in the Great Lakes region, it's tricky to replicate old photos since abundant vegetation can obscure its original position.

That's how McKeehan spent the summer of 2019 after digging through old archives. He worked with the Michigan Environmental Council to select photos that had an exact location and date they were taken. He also needed to be able to recreate the images. It wasn't easy. 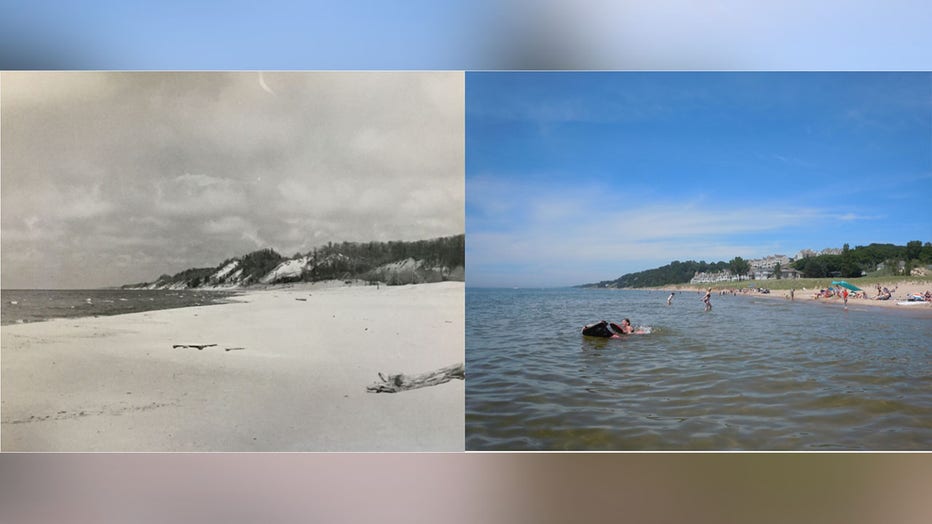 The growth of vegetation stands out in these two photos, but not as much as the loss of beach. The left photo (credit: Archives of Michigan) was shot in 1958 at Holland State Park. To take the same image on the right (credit: Kevin McKeehan), the pho

One photo McKeehan tracked down was in downtown Grand Haven, where he needed to dodge traffic while replicating a photograph taken in 1935. During another trip, he chartered a boat ride to North Manitou Island, waded to shore, then hiked for hours before finding the outlook. The photo was a near-perfect match to the 1905 original.

"Re-taking photos is so hard," he said. "Unless you absolutely know where someone took a photo, it can be impossible to locate the spot."

Of the 197 photographs considered candidates for the study, only 36 could be repeated. Twenty pairs were selected for the study. Some pairs show mostly bare sand in the original and total vegetation coverage in the other. Dunes that appear small in older photos now obscure the horizon due to growth in their size and vegetation. At Holland State Park, the original photo was taken on land while the replicated photo was taken 30 feet into Lake Michigan. 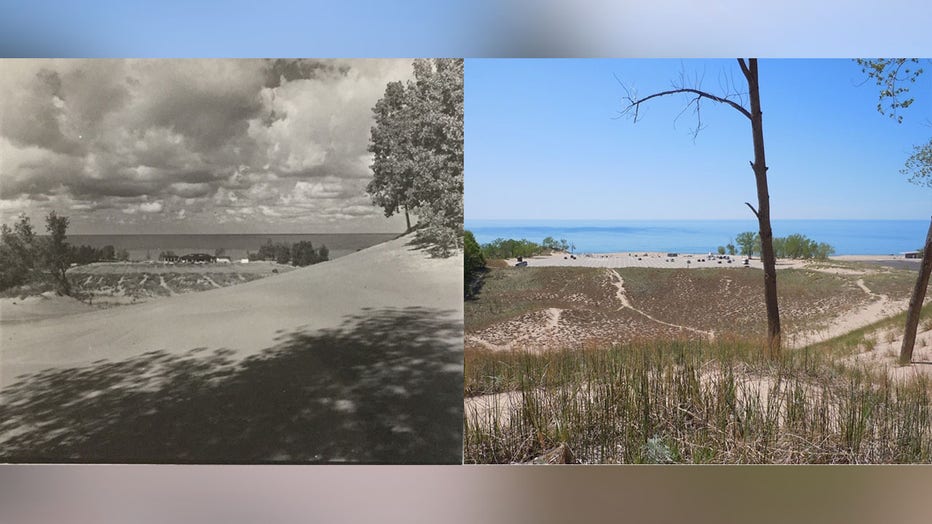 Every image showed the same thing: more vegetation and less sand. Some were taken more than a hundred years ago; some only 30 years ago. McKeehan said "there are potential culprits, but no smoking gun" behind the growth.

The Midwest has seen average rainfall increase over the decades, which could boost the moisture in sand and allow plants to take hold. The world also has more carbon dioxide in the air, offering an abundant source of nutrients for plants to feed on. A measured decrease in wind has also been recorded, which means dunes may be moving less. The spread of invasive plant species could also be playing a factor.

MORE: Does Lake Huron hold the secret to Earth's oxygen?

These metrics are all correlations and on their own don't answer the question completely, Arbogast stressed.

"We weren't really sure what we were going to find (when we started)," he said. "(but) by filling in the gaps of why these things happen in some circumstances, we can understand the drivers of change."

More vegetation means more stabilization. The dunes with plants growing out of them can become fixated by root structures, making them less mobile. As they move less and the grass grows, larger plants and woody vegetation could take over.

In a simplified version of this scenario, "the longer (dunes) remain stabilized, the more likely you'll have trees," McKeehan said. "It's of course more complicated than that, but that's the ultimate destination if you keep going down that road."

That has big implications for the management that local communities use when building on them. Public land built on sands that shift quickly need to be managed differently than land where the sand moves less. 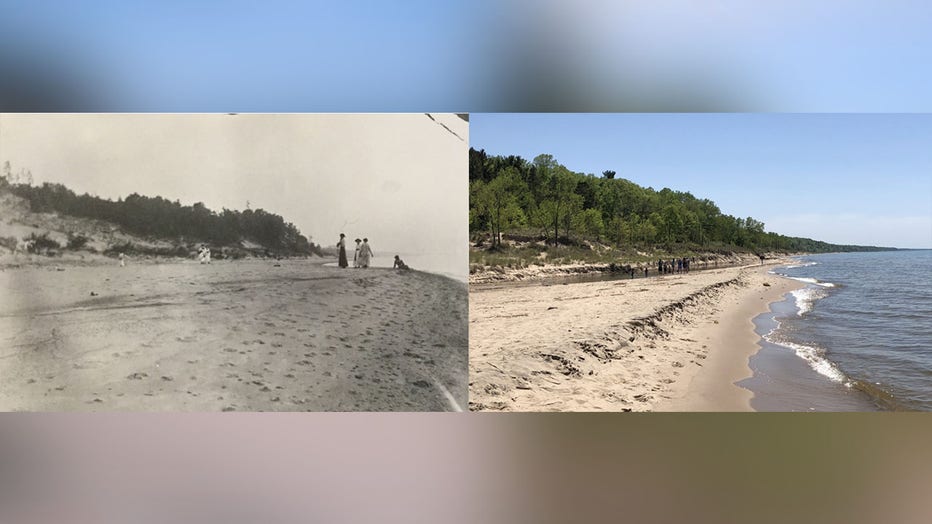 Almost 120 years separate the two photos taken at Warren Dunes, where the Painterville drain enters Lake Michigan. The photo on the left (credit: Norman Asa Wood, Archives of Michigan), taken in 1900 and the photo on the right (credit: Kevin McKeehan

Someone who wants to build a house near dunes may think twice before investing in land that changes every day.

The study has other implications beyond land management, offering insight into the behaviors of dunes centuries ago. During the earlier years of his research, Arbogast said the assumption behind how west Michigan dunes formed was that it happened more or less in one interval of time - between 5,000 and 6,000 years ago during what is known as the Nipissing Stage - a prehistoric period of extremely high water levels in the Great Lakes. 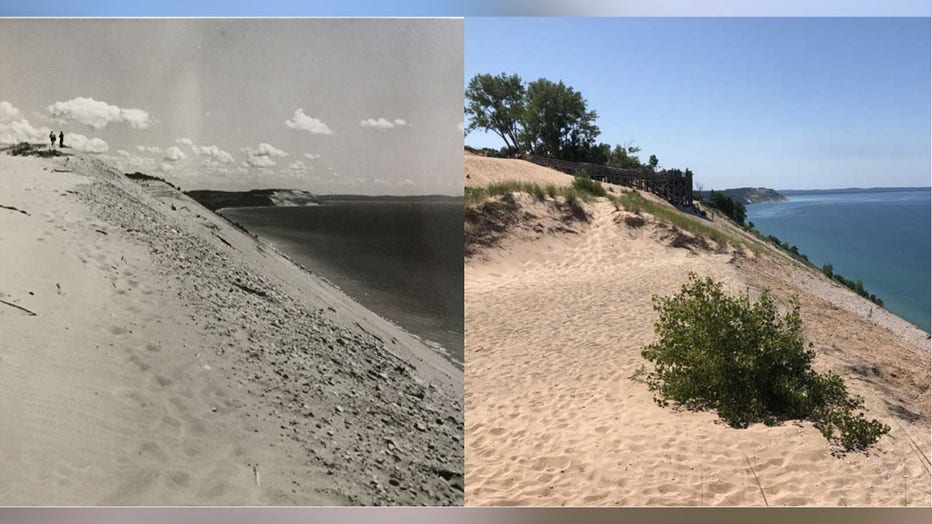 The photo on the left (credit: Archives of Michigan) and the right (credit: Kevin McKeehan) were taken near the Sleeping Bear Overlook. While bare sand can be seen in both the 1964 image and the 2019 image, some grasses and even trees have since take

But a closer look revealed buried organic layers within the sand. The biomass represented the surface of the dunes at different times during their growth - having formed when sand wasn't accumulating.

Using radiocarbon dating, Arbogast narrowed down the general age of the organic layers that had been exposed within the dunes. His research demonstrated that while the dunes began forming during the Nipissing Stage, the growth occurred in distinct stages. The youngest organic zones at the top are only a few hundred years old, while the layers at the bottom are far older.

From that understanding, dune researchers determined that the dunes were very active during some periods and very stable with little movement and accumulation during others.

And if history has any lessons for Michigan's dune researchers, that same activity and inactivity should continue as long as the dunes are allowed to behave naturally.

If you'd like to learn more about repeat photography, the Michigan Environmental Council's Sands of Time project is available for viewing online here.