FOX 2 - A driver in Monroe County found out the hard way getting clocked at 180 miles per hour in a 70 mile an hour speed zone, the MSP 1st District revealed in a tweet Tuesday.

"For some reason, the public has a perception with the stay-at-home stay-safe order with only essential drivers on the road that there is a lot less traffic and people are taking it on themselves to drive at high rates of speed and over the past couple of weeks, our troopers have seen an increase in people speeding on the highway," said Lt. Brian Oleksyk at the MSP.

After Michigan State Police busted a driver going 180 miles per hour on I-75, officers are warning they are seeing an increase in speeding since the state's stay-home order went into effect.

"MSP has seen an increase with high speeds on roadways during this pandemic. This person was cited for doing 180 MPH in a 70 MPH zone," read the tweet that was posted Tuesday night. "MSP wants people to know, just because there is less traffic on the roads and warmer weather, there are no excuses for speeding. #DriveSafe."

In the remarks section of the ticket, the driver apologized with the following:

"My fault. I was speeding with another vehicle. I'm sorry." 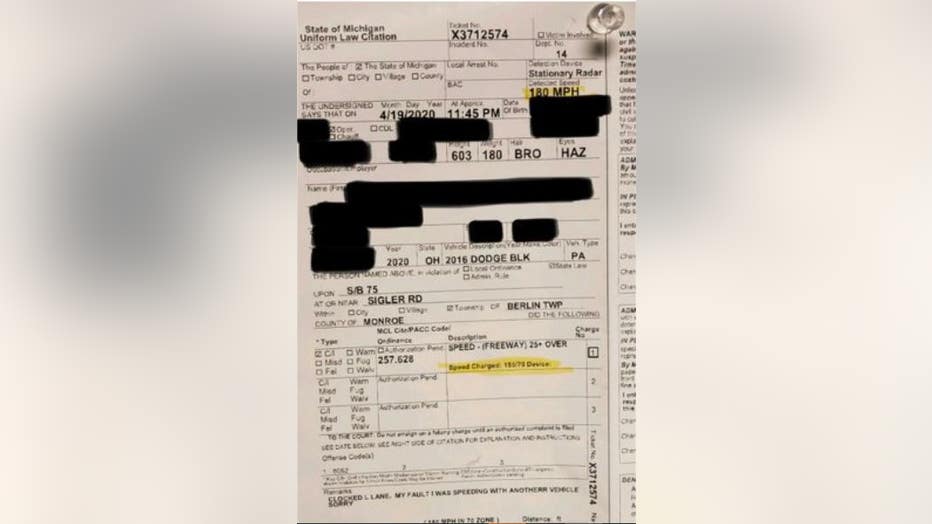