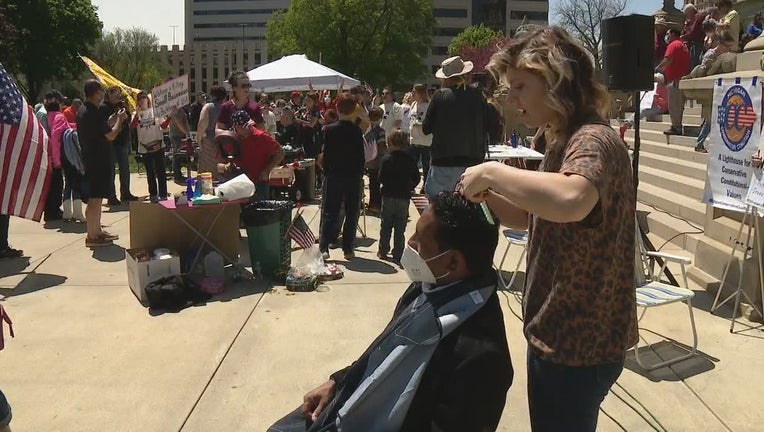 LANSING, Mich. (FOX 2) - Hundreds of people protested Michigan Governor Gretchen Whitmer's closure of non-essential businesses including barbers and hair salons during Operation Haircut on Wednesday. Some even got haircuts on the front lawn of the capitol and Michigan State Police were handing out $500 disorderly conduct tickets.

Operation Haircut was organized by the Michigan Conservative Coalition and is the most recent protest against Gov. Whitmer's ordered closure of non-essential businesses.

Protesters fill front of Capitol in Lansing for Operation Haircut

A group of conservatives gathered at the Capitol for what they called Operation Haircut to protest the Governor's Stay Home order and push for personal services businesses to be opened.

"I'm a small businessman myself, the pain is real. The haircutters especially see it. They own their own shop, they hire five or 6 contractors, it's brutal. Et's a regulated industry, they're used to following rules. They are very reasonable people that could have reasonably managed the risk of how to get through this thing," said Sreeny Cheruauri.

It was inspired by Owosso barber Karl Manke who reopened his shop earlier this month but was forced to close when Licensing And Regulatory Affairs (LARA) suspended his business license.

"Michigan's small business owners are patriotic and law abiding citizens, but enough is enough. Our Governor's actions show every day that this is no longer about the China virus. Her actions show this is now about a progressive radical agenda," said Marian Sheridan, a co-founder of the Michigan Conservative Coalition in a press release. "Dope shops are open, abortion mills churn on, but barber shops are, somehow, unsafe. Show us that 'science' Governor!"

The group announced that free haircuts would be done on the Capitol lawn between noon and 3 p.m. on Wednesday but encouraged people to comply with social distancing and use face coverings.

How you would get a haircut while observing six feet of social distancing is unclear. And for people who did cut people's hair, MSP would warn them that they were in violation of a state order. If they continued to do so, MSP would warn them again before giving them tickets for $500 for disorderly conduct.

According to a spokesperson from MSP, those tickets will be forwarded on to the Attorney General's office for review.

Customers were not ticketed.

Governor Gretchen Whitmer has said protests like this only causes the spread of the virus and will prolong the Stay at Home order - the same order the conservative group is fighting.

"I will not stop working around the clock to protect every single person in this state," Whitmer said. "No matter who you are, where you come from, or political party you subscribe to."

Editor's note: a previous version of this story said the tickets were $1,000. The citations are for $500.