OAKLAND COUNTY, Mich. - Michigan State Police are performing inspections on semi-trucks at weigh stations this month in an awareness campaign for human trafficking.

Police estimate between 100,000 - 300,000 minor children are being trafficked in the United States at any given time. Such high numbers is why MSP is taking time at the beginning of 2020 talking to truck drivers and conferring with law enforcement in area states to combat the crime.

And it all starts safety inspection.

Michigan State Police are teaming up with law enforcement from across the region in an effort to spread awareness about human trafficking, using their contacts between departments and the truck drivers on the road.

"Every truck driver we come in contact with at a traffic stop, at a rest area, at a truck stop - they're on the road 24/7, all throughout the week, all over the country. So they see a lot of things that might be unusual to them," said Michigan State Police Officer Joel Chester.

Chester was at an Oakland County weight station on Monday knocking on the doors of semi-trucks, talking to their drivers.

"A lot of these people that are in prostitution aren't there on their own choice - they're taken at a young age, transported across the country away from their family and support and kind of stuck there," said Chester.

One of the most common ways that transportation happens is via delivery truck. In an effort to regionalize the effort, Chester and his partner Kiontae Cope are working in a multi-state effort that includes Indiana, Ohio, and Illinois, talking to drivers and encouraging them to be involved.

Michigan State Police first partnered with Truckers Against Trafficking in 2015, before growing into a national leader in combating the practice. For them, working in connection with truck drivers gives them a leg up in the fight and is saving lives. 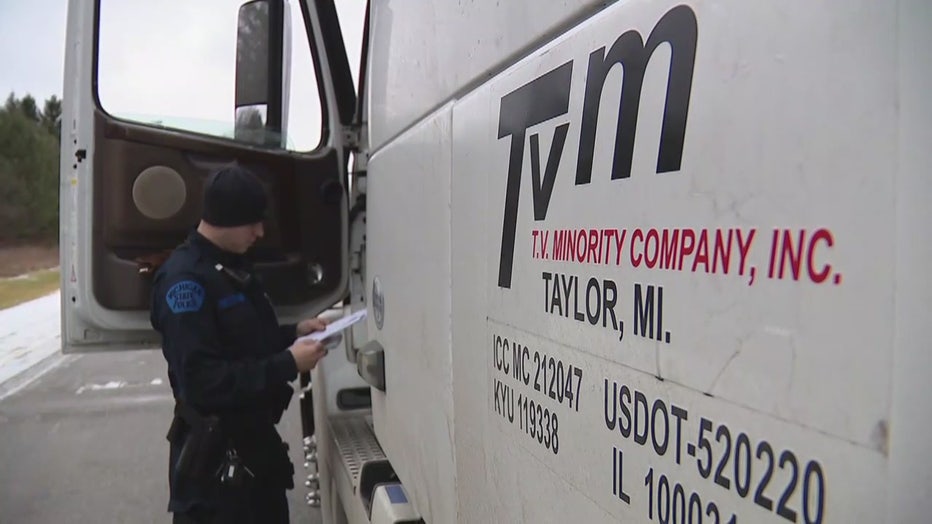 "I think it's for a good cause, especially working with the truckers and us, coming together as a team and basically just having more eyes out there," said Cope.