Another slice of the American Rescue Plan relief package will be going toward affordable housing in Michigan, where owning a home has become even more difficult amid rising rent and mortgage costs.

DETROIT - The way Deidre Wasson sees it, aid to owning a home means more than a lower monthly mortgage.

"For someone like me, a mother of two young children and a student in nursing school, it means that homeownership will no longer be a dream, but a reality that my family will be able to experience homeownership," she said.

Wasson was speaking from a rehabbed factory where the future of Michigan's affordable homes is being built. Citizen Robotics is using 3-D technology to manufacture housing that is cheap to build and could alter the state's housing landscape.

The new company's factory was also the site of the governor's unveiling of her affordable housing initiative, which will be buoyed by another piece of the massive pandemic relief fund allocated to Michigan.

"Right now we have a once-in-a-generation opportunity to give thousands of more Michiganders a safe place to call home," said Gov. Gretchen Whitmer.

Whitmer says the state will leverage $100 million from the American Rescue Plan to expand access to affordable housing. It will "help close equity gaps, and to support the development of vibrant communities," Whitmer said on Tuesday.

The resources will find new homes for 6,000 Michigan residents by developing or rehabilitating 2,000 units and creating 1,600 jobs. The money would be stored in the Housing and Community Development Fund, which was set up in 1966 as a means to provide low-income residents living options.

Whitmer was flanked by her lieutenant governor, the Detroit mayor, and head of the Michigan State Housing and Development Authority. 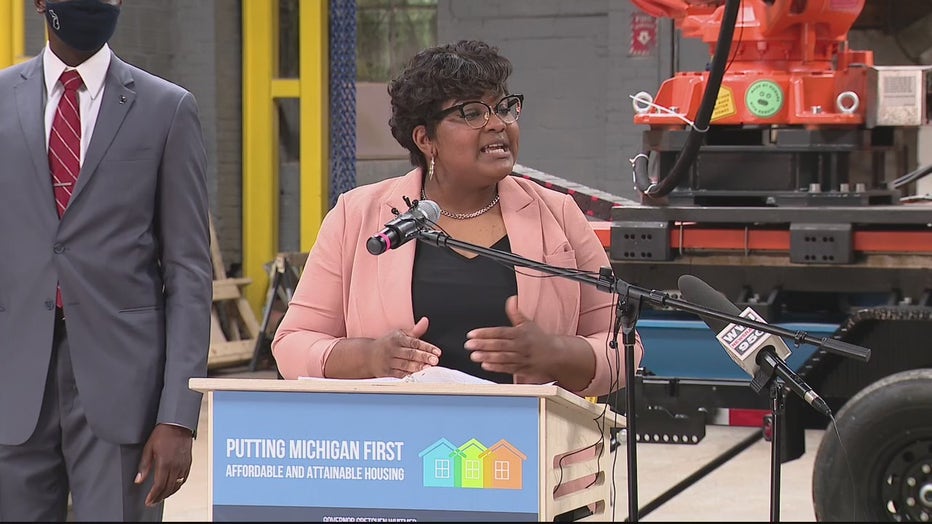 "For someone like me, a mother of two young children and a student in nursing school, it means that homeownership will no longer be a dream, but a reality that my family will be able to experience homeownership," said Deidre Wesson.

"These funds will allow people in Michigan to access more than just a house - this will help people invest and create homes," said Lt. Gov. Garlin Gilchrist.

The state estimates that the investment will also leverage an additional $380 million in private investment - something the city of Detroit would gladly welcome. Its housing and rental costs continue to rise along with other expenses, while wages lag behind.

RELATED: The eviction moratorium is ending. Here's resources to navigate the way forward

"We are making sure that no one is pushed out of this city because of their ability to pay," said Detroit Mayor Mike Duggan.

The investment is even more prescient due to the ending of the federal moratorium on evictions concluding at the end of July.

MSHDA says it would allow the funds to be used to help with down payments, security deposits, avoiding foreclosure and homelessness.

"It is going to be critically important that we really talk to the people and the public about what they're seeing as their needs in affordable housing," said acting Executive Director Gary Heidel.