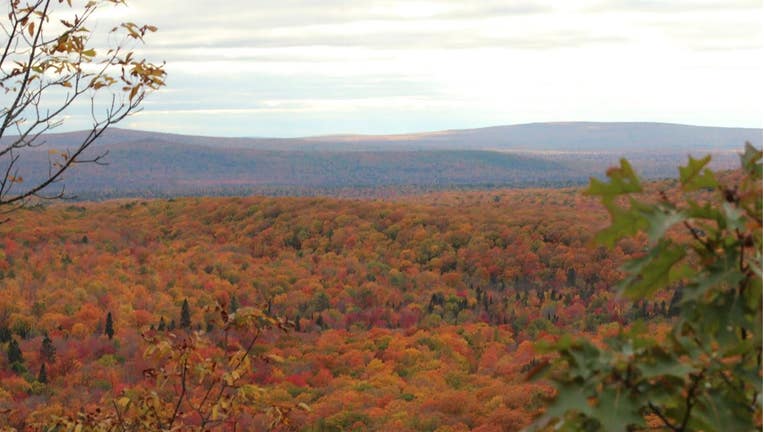 Summer's last gasp of warm air is giving way to the season of peak pigmentation in Michigan's trees.

The state's northern regions are starting to reach their most vibrant colors with reds, yellows, oranges, and purples blanketing Michigan's forests.

The end of September is typically when the transformation begins, but travelers will also have much of October to catch some of the state's best views.

Why do the leaves change?

Why does this process unfold? Everyone is familiar with signs of fall - cool breezes, darkening evenings, and trees shedding the leaves - but what tells our foliage it's time to start the process?

Trees treat winter like a drought. Available water and sunlight diminish as the temperatures start to cool, which means trees will need to start stockpiling on energy while recoiling on processes that expend precious fuel they will need to survive the upcoming season.

In the summers, trees spend a lot of energy growing their leaves. That's how they'll collect energy through photosynthesis. Along with that growth is the production of chlorophyll, which is what turns leaves green.

Trees will begin retracting their chlorophyll when temperatures fall and the amount of daylight reduces. This enables them to store the excess nitrogen in chlorophyll that can act as the primary fertilizer in the winter. When that happens, that green color goes with it.

Leftover are the many shades of reds, purples, and oranges that would otherwise dominate the color of leaves without the traditional greens.

In the same way one can't see stars during the day because the sun is too bright, the green pigment in leaves dominates all other colors that might otherwise show themselves. But when that green pigment is no longer being fed, trees show off their more colorful quality.

What trees show what colors?

The color a tree's leaves turn into is not uniform. Oaks, as well as sugar and red maples all turn the color red.

Sassafras, which are found throughout southern Michigan ranges from yellow to deep red. Blackgums, smaller native trees are not common in Michigan, but the ones that do live in the state also show off spectacular reds as well.

Aspen and hickories tend to turn a golden yellow. So will tamarack - or larch - one of the only native conifer trees in Michigan that loses its needles after they turn yellow.

Ginkgos, which are native to China but have also been planted in Michigan, tend to produce bright yellow colors. They're often used as street trees because they can tolerate poor environmental conditions.

Baldcypress will produce a russet red fall color before it sheds its needles.

When is the best time to see the fall colors?

Due to waning warm temperatures from climate change, the timing of the seasonal change has adjusted slightly. The colors now peak at later times in the fall.

Even so, late September and October are the best times to see the colors.

According to Pure Michigan's fall color map, the Keweenaw Peninsula and Isle Royale, two of Michigan's most northern points, start to see colors change on the fall equinox.

By October 11, the entire state should be in peak form.

The browning of leaves in Michigan will begin by mid-October. By the 21st, the UP will be past peak as well as the northern tip of the Lower Peninsula.

By Oct. 31, the colors will have largely showed their true vibrancy as they begin to fall.

Where can I see Michigan's peak fall colors?

Most places outdoors will offer a good chance to see colors. However, travelers will have a better chance the further north they go and the higher they get.

Elevation can help best identify where the prettiest places are to see.

If you'd rather stay in the car and enjoy the view from behind windowpanes, try these scenic byways: