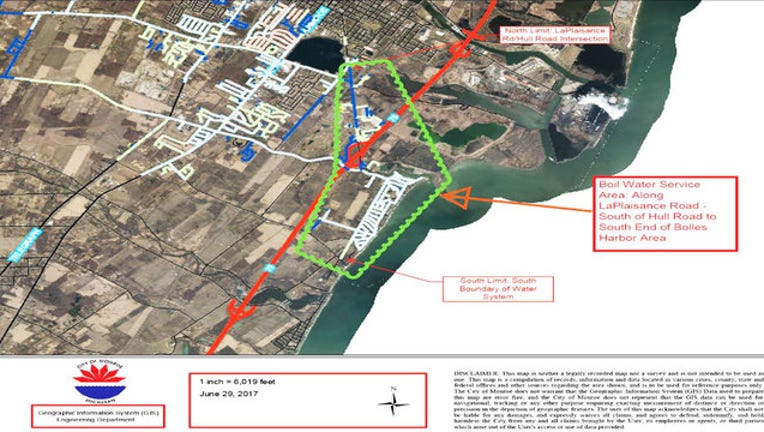 Map of the affected area provided by the city.

MONROE, Mich. (WJBK) - The city of Monroe has issued a drinking water warning and boil water advisory due E. coli being discovered.

It was found in the water supply in the area along LaPlaisance Road south of Hull Road to the south end of Bolles Harbor on June 28. The city says that no other service areas are affected.

This in that area are recommended to boil water, according to the city which expects to resolve the problem in the next 48 hours.

The bacteria can make you sick, and are a particular concern for people with weakened immune systems.

The city released the following statement:

DO NOT DRINK THE WATER WITHOUT BOILING IT FIRST.  Bring all water to a boil, let it boil for one minute, and let it cool before using, or use bottled water. Boiled or bottled water should be used for drinking, making ice, brushing teeth, washing dishes, and preparing food. Boiling kills bacteria and other organisms in the water. Continue using boiled or bottled water until further notice.

Fecal coliforms and E.  coli are bacteria whose presence indicates that the water may be contaminated with human or animal wastes.  Microbes in these wastes can cause diarrhea, cramps, nausea, headaches, or other symptoms.  They may pose a special health risk for infants, young children, some of the elderly, and people with severely compromised immune systems.

The symptoms above are not caused only by organisms in drinking water.  If you experience any of these symptoms and they persist, you may want to seek medical advice.  People at increased risk should seek advice about drinking water from their health care providers.

What happened? What is being done?

More testing is being conducted, and the system is being flushed.  We are also adding more chlorine to the water in the system for disinfection purposes.  We will inform you when tests show no bacteria and you no longer need to boil your water.  We anticipate resolving the problem within the next 48 hours.

Please share this information with all the other people who drink this water, especially those who may not have received this notice directly (for example, people in apartments, nursing homes, schools, and businesses).  You can do this by posting this notice in a public place or distributing copies by hand or mail.

This notice is being sent to you by the City of Monroe Water System.