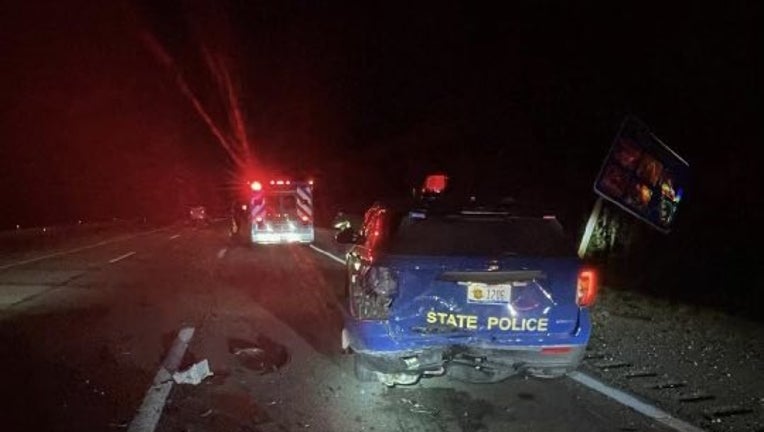 An MSP trooper was rear-ended Monday morning by a reported drunk driver.

WASHTENAW COUNTY, Mich. (FOX 2) - A Michigan State Police trooper was hurt early Monday morning in Washtenaw County while protecting a tow truck driver when a drunk driver smashed into the back of he patrol car.

MSP said a trooper from the Brighton Post was sitting in his car on westbound I-94 at Zeeb Road around 1:30 Monday morning and blocking part of the lane to allow a tow truck driver to work.

According to MSP, as the trooper was blocking part of the lane, another driver hit the back of the patrol car while the officer was in the driver's seat.

The driver of the other car, a 33-year-old from Canton, was drunk, police said. That driver was arrested for Operating While Intoxicated.

The trooper was taken to the hospital for minor injuries.

Michigan has a strict Move Over Law when coming up an any emergency, maintenance or utility vehicle. Drivers must move over and slow down to at least 10 MPH below the posted speed limit for any emergency vehicles - including police, fire, ambulances, and tow trucks.

Failure to do so could result in a $400 plus two points on a driver's license.