WARREN, Mich. - The Warren Police Department is announcing a $3,000 reward for help in an investigation into multiple hate crimes against a family in the city.

Labeling incidents against Candace and Eddie Hall "disturbing" and "disgusting," Police Commissioner Bill Dwyer said he and the police department were outraged at the incidents that had taken place over the past week.

Warren police shared surveillance video of a man wanted for a hate crime, after they say he threw rocks through a Black family's window, slashed their tires and even shot into their home.

"They're victims of hate crimes and intimidation which we're not going to tolerate," he said.

Headlines of the vandalism directed toward the Halls were published Wednesday after obscenities and a swastika had been scribbled on their truck, their car's tires had been slashed, and a brick had been thrown through their front window.

However, Dwyer said the family had been shot at multiple times on Monday and Thursday as well.

During the Monday incident, a white man arrived in front of their home late at night and armed with a gun. He fired four rounds at the home, striking the truck in the driveway. The subjects fled the area on foot. Neighbors confirmed that they heard gunshots.

On Thursday they were shot at again. 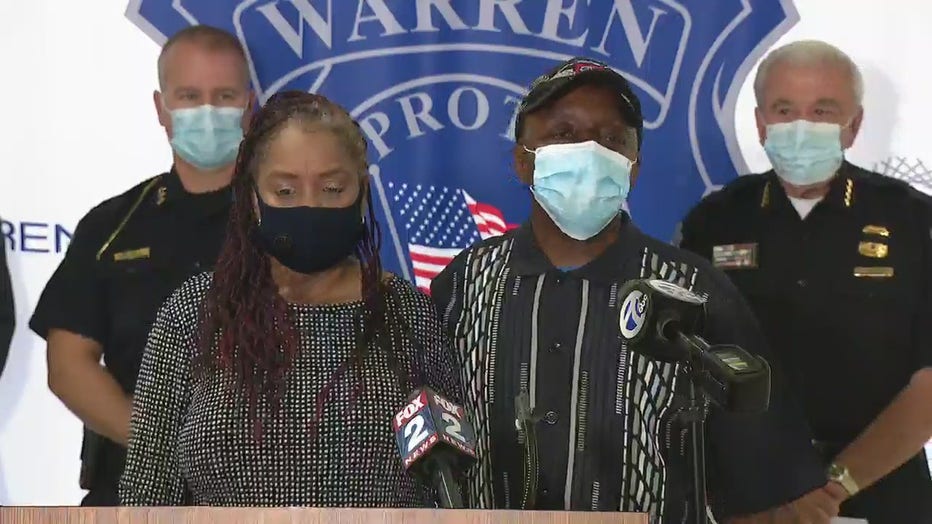 "We're a good Christian family, good background of loving the Lord, treating everybody right," said Eddie, who spoke alongside his wife during the press conference.

"We haven't had no hostilities since I've been in Warren now six years, no problems with anybody," he said.

Eddie and Candace, both veterans who met while serving in the U.S. Army, aren't the only Black family to live in the neighborhood - the subdivision was described as "mixed" during the press conference. However, Candace did confirm they were the only household in the neighborhood with signs supporting the Black Lives Matter Movement.

The sign is placed in their front door window, and both believe it is the reason they have been targeted by the suspect(s).

On Wednesday, the family came out to disturbing messages labeling the family as a "terrorist" and to "get the F out of here."

"I'm outraged and upset by a cowardly act of what appears to be a racially motivated attack on a home and vehicle of an African American family in Warren. This attack occurred yesterday evening," he said in a statement. "This is completely unacceptable and will NOT be tolerated in our city."