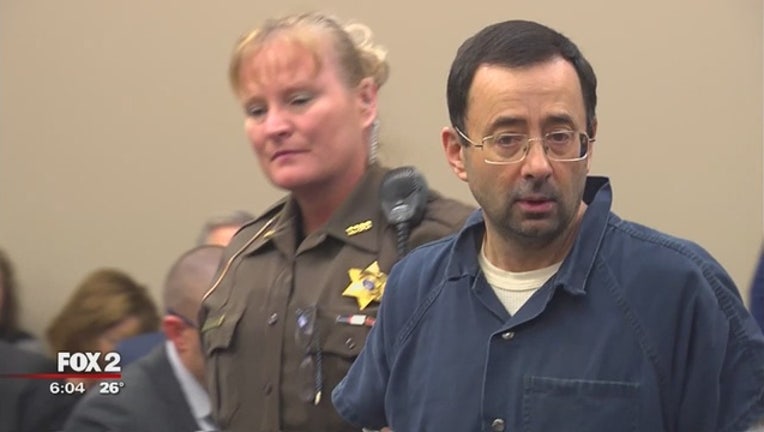 CHARLOTTE, Mich. (AP) - The young athletes who confronted Larry Nassar about molesting them at an elite Michigan gymnastics club saved some of their harshest words for a person who was not in the courtroom: an Olympic coach who for years sent teenage girls to see the now-disgraced doctor.

John Geddert operated the Twistars club, where Nassar offered treatments on Monday nights. His victims complained that the coach created an ultra-competitive atmosphere, was indifferent to injuries and rarely offered gymnasts any choice to see a different doctor.

"Coaching by fear, intimidation and shame and explicit favoritism was the norm," recalled Annie Labrie. She said it was "no surprise" that Nassar was able to continue his practices as long as he did. "We were conditioned for years to obey at all costs."

Nassar was in court Wednesday for his third and final sentencing hearing. It was scheduled to resume Friday, with more victims expected to speak. The proceedings will probably extend into next week.

This time the focus is on the abuse that happened at Twistars. The nearly 30 victims who gave statements so far included women familiar with the club's environment. One also alleged that Geddert was aware in the late 1990s that Nassar had performed an "inappropriate procedure" on her when she was 16.

The victim said she told her mother in 1998 that Nassar had sexually assaulted her during an appointment at the Michigan State University sports medicine clinic. Her mother talked to Geddert, and the two agreed that Nassar would not treat her daughter in private appointments again, according to the accuser, whose anonymous statement was read in court by a prosecutor.

"Why did John continue to refer his athletes to Larry knowing full well his treatments?" asked the woman, who expressed guilt for not calling the police for another 18 years, after she read a 2016 Indianapolis Star story in which two former gymnasts, including an Olympic medalist, alleged that Nassar had sexually abused them.

After the conversation between Geddert and her mother, she remembered, Geddert was "upset" and "mad."

"This was what I had to do so I didn't have to see Larry alone again," she said.

The 60-year-old Geddert has been suspended by USA Gymnastics, the sport's governing body, and has announced his retirement. He transferred ownership of the gym -- which bills itself as the top-ranked club for women's competitive gymnastics -- to his wife, Kathryn. He previously was head coach of another club, Great Lakes Gymnastics, for a dozen years.

The Associated Press left a message seeking comment with his lawyer. In court filings related to lawsuits, Geddert has said he was unaware of Nassar's crimes.

Bailey Lorencen, a former gymnast whose statement was read in court Wednesday and who confronted Nassar at a similar hearing last week, singled out Geddert for his inaction. "There is no excuse for you not knowing what is happening in your gym," she said.

The woman who alleged that Geddert was aware of concerns about Nassar long ago said she spoke with him in 2016, after the allegations against Nassar exploded into public view.

"In our conversation, though it was brief and though he denied knowing about my assault, he went on to tell me that what Larry did was a medical treatment, and I needed to do my research," she said.

Nassar's two prison sentences -- 60 years for child pornography and 40 to 175 years for abusing young women and girls at the university and his home -- have cast Twistars and Geddert in particular in a negative light.

Women and girls describe Geddert as abusive and dismissive of injuries. Nassar, by contrast, tried to curry favor with gymnasts by giving them Olympic pins and other gifts.

Makayla Thrush, who trained at the club from ages 7 to 17, said she developed an eating disorder because of Geddert and accused him of becoming so angry that he threw her on top of a low bar, ruptured the lymph nodes in her neck, gave her a black eye and tore the muscles in her stomach, ending her career.

"I have been dealing with many mixed emotions the past few weeks, some of it having to deal with the enablers of the abusers trying to get out of their screw-up," she said. "There isn't one bone in my body that doesn't hate John Geddert for everything he has done to me in my career."

Lindsey Lemke, who was a gymnast at Michigan State and Twistars, said Geddert deserves "to sit behind bars right next to Larry."

Last month, ESPN reported that Geddert was accused in two separate incidents of physically assaulting a parent who also was a coach at Twistars and assaulting a gymnast. He did not face charges.

In Michigan, it is a misdemeanor punishable by up to three months in jail and a $500 fine for certain professionals to fail to report suspected child abuse. Legislators are considering whether to add coaches to the list of mandatory reporters, which includes medical professionals and therapists.

A spokeswoman for Michigan Attorney General Bill Schuette declined to say if Twistars or Geddert is under investigation.

Geddert's national profile rose while training Jordyn Wieber, the 2011 world all-around champion and a member of the "Fierce Five" that won a team gold at the 2012 Olympics in London, with Geddert as head coach.

Nassar accompanied the team to London, and six-time Olympic medalist Aly Raisman said recently that he abused her there. Wieber said she also was assaulted by Nassar but did not mention Geddert or Twistars in her statement.