George and Melvin DeJesus are finally free after being exonerated for a crime they didn't commit. The brothers have been in prison for 25 years.

SOUTHFIELD, Mich. (FOX 2) - For the past 25 years, two Oakland County brothers have spent their lives behind bars for the murder of a woman that they didn't commit. Now, almost a quarter of a century later, they're both about to be released after new evidence has been discovered.

An Oakland County judge has vacated the convictions of George and Melvin DeJesus, two brothers who were convicted of strangling a Pontiac woman to death in 1995. Both men were convicted after Brandon Gohagen - an alleged witness who admitted to sexually assaulting the victim - but that the brothers ‘forced' him do it. He said they then bound and beat the woman to death.

However, 25 years later, that has turned out to be not true.

On July 11, 1995, the woman was found naked in her basement with a pillowcase over her head and with wires binding her neck, wrists, and ankles. Through DNA evidence, Gohagen was linked to the crime scene. He eventually told police that he was forced by DeJesus brothers to sexually assault the victim.

Gohagen would take a deal and pleaded guilty to second-degree murder and first-degree criminal sexual conduct. In exchange, he testified against George and Melvin.

During their trial, the brothers presented alibi witnesses who stated they were at a party the night the woman was killed. After the party, the three men went different ways. However, those witnesses had conflicting days of when the party was - whether it was on a Friday or Saturday. Ultimately, the DeJesus brothers were convicted in 1997 and sentenced to life in prison without parole.

Two years later, in 2017, Gohagen was convicted of a 1994 sexual assault and murder of another Oakland County woman in which he acted alone. Not only that, the Conviction Integrity Unit (CIU) connected Gohagen to 12 other women who were emotionally, physically, and sexually abused by him.

The CIU also found evidence the brought Gohagen's credibility into doubt and a witness said that he confessed to implicating the brothers in exchange for a deal.

As investigators continued to work the case, they spoke with multiple witnesses and reviewed decades of documents. Among those were witness statements made within weeks of the crime that corroborated the brothers' alibis the night of the murder in 1995.

RELATED: After 19 years in prison for murder he didn't commit, man becomes advocate for others wrongly imprisoned

"We are happy that George DeJesus can say he has been fully exonerated after nearly a 25-year struggle to prove his innocence," Tracey Brame, the director of the Cooley Innocence Project, said. "George has steadfastly maintained that he had nothing to do with this terrible crime. We are grateful to Attorney General Dana Nessel and the Conviction Integrity Unit team for their willingness to listen to the brothers and reinvestigate the case. Today, George and his brother, Melvin, have finally received justice."

WATCH NEXT: Exonerated after double murder conviction that locked him up 18 years, man sues Detroit for $118M 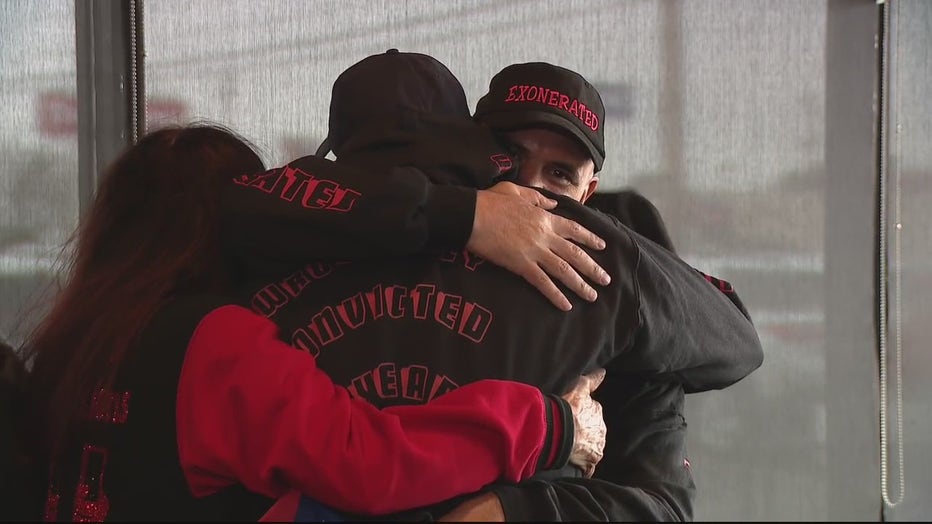 "We are thrilled to learn that our client, Melvin DeJesus, and his brother, George, will be fully exonerated, some 27 years after the true killer framed the brothers for this heinous crime." Dave Moran, co-director of the University of Michigan Innocence Clinic, said. "We thank the Attorney General’s Conviction Integrity Unit for their thorough reinvestigation of this case, which led them to reach the same conclusion that we did: the brothers are completely innocent. And we thank the Oakland County Prosecutor’s Office for agreeing to this result. We will now focus on helping Melvin DeJesus adjust to his freedom and move on with his life."

The men were released Tuesday.

It was an emotional reuniton after decades behind bars.

"When the judge told me I was free, I was real emotional. I tried to hold it back but I couldn’t. Tears just started coming down. I was like, man, just be strong. Sure enough, I couldn’t do it," Melvin DeJesus said.

Both men are eligible for up to a year of reentry housing and two years of supportive services. That includes job placement help, job training, transportation assistance, work clothing or tools, vital documents assistance and more.